It's known that five points determine a conic section. Five random points can go right into the $6\times6$ matrix, and then the $A x^2 + B xy + C y^2$ part can be looked at. If $B^2-4AC<0$, it's an ellipse. Five random points will almost never produce circles or parabolas, so the results will be ellipses and hyperbolas. What are the odds of an ellipse?

EDIT: As Oscar points out, I should have said "It's more than $e/10$." In my trial, real-values points were randomly picked from a unit square. Square Triangle Picking methods might be applicable. 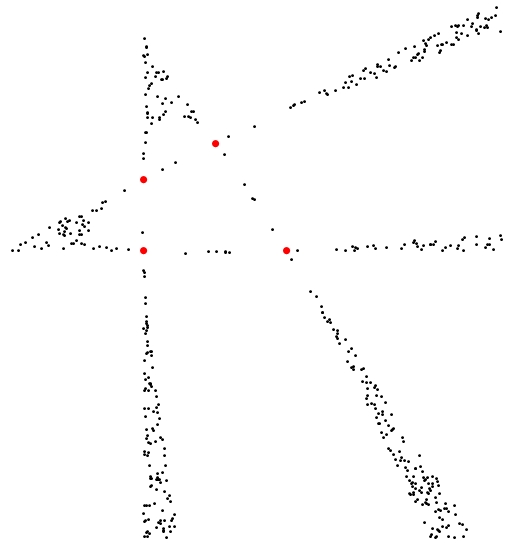 EDIT3: That spray of points above goes back to Newton, Philosophiae naturalis principia mathematica, 1687, where he solved the 4 point parabola (another version). If a point is between one of the two parabolas and the degenerate lines, then it gives a hyperbola.

Not the answer you're looking for? Browse other questions tagged linear-algebra geometry conic-sections or ask your own question.

3
$5$ points are randomly chosen on the plane, what is the probability that the resulting conic is parabola, ellipse, hyperbola.

12
How to find an ellipse, given five points?
6
Calculate Ellipse From Points?
5
Why are hyperbolas defined by two branches?
10
What shape do we get when we shear an ellipse? And more generally, do affine transformations always map conic sections to conic sections?
6
Is there a geometric construction that finds the intersection of two conics, given only five points on each?
8
Likelihood of circle vs. ellipse vs. parabola vs. hyperbola from $ax^2+bxy+cy^2+dx+ey+f=0$ with coefficients uniformly random in $[-1,1]$