How did the definition of complex logarithm evolve since Cotes (1682-1716)?

From the question Difference between the formula of Roger Cotes and Euler:

The answer (in full):

The problem is that the complex logarithm is multivalued under the current definition. Therefore Cotes' formula is not really true anymore, but it was when he got it.

This raises the question How has the definition of the complex logarithm evolved since Cotes?

I assume the answer suggests that log was single valued in Cotes' time, since it is multivalued now. Was it in fact of the same general form as it is now but with a single breakpoint in $\theta$?

If not, please explain the change in the definition of logarithm from Cotes's time to now in such a way that someone with a basic working knowledge of complex numbers who's just read Wikipedia's Complex Logarithm could understand. 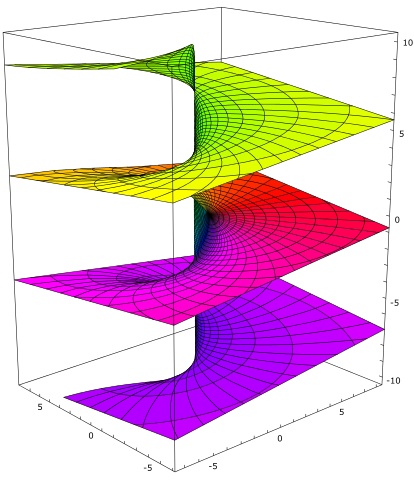 The emphasis on the single-valuedness of a function is a fairly recent phenomenon. Cauchy in his Cours d'Analyse (1821) deals in detail with multiple-valued functions for which he uses a double-symbol notation, such as $\sqrt{~}\!\!\!\!\sqrt{x}$ (to account for both roots in this case). If so, Cotes' formula was legitimate for his historical period.

Today we incorporate single-valuedness into our definition of a function following mid-19th century authors, so such a definition is no longer adequate.

Not the answer you're looking for? Browse other questions tagged complex-numbers logarithms math-history or ask your own question.

5
Difference between the formula of Roger Cotes and Euler

21
Where did the word "logarithm" come from?
4
How did the teaching of mathematics change since the 19th century?
3
Branch cut for $\log (iz)$ in the region $\{z:\mathrm{Im}(z)>0\}$
0
complex logarithm
5
Difference between the formula of Roger Cotes and Euler
2
Complex numbers and logarithm