The first player can remove $40$ marks by repeatedly choosing all $41$ marks on "black cells" in chessboard coloring until all the remaining $40$ marks are removed. However, the argument used in a variant that $40$ is the best doesn't work here.

The first player can force the second player to remove all but 21 marks by picking the 17 red squares (drawn as circles) in the following artwork until they all have no adjacent marked square. 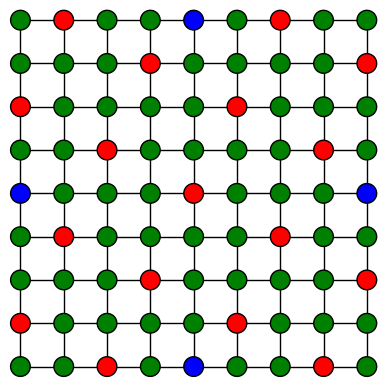 The only remaining marks will be in the squares labelled red or blue, of which there are 21. (In graph theory terms, the red and blue vertices form an independent dominating set of order 21 in the 9x9 grid graph.)

The second player can use the strategy of "try to save the reds" to ensure 17 marks are left. In this strategy, whenever there is the option to do so, player 2 chooses a square that is not red. There is never a choice of which red square to spare: no square is adjacent to two red squares. The only way a red square can become unmarked is when player 1 chooses a marked neighbour of the red square such that the neighbour has no other marked neighbors. This implies that after unmarking the red square, that neighbour will have no marked neighbors at all and therefore will never be unmarked. So each of the 17 red squares ends up with a mark either on it or adjacent to it, and these 17 marks are all distinct.

3
Remove a mark from any adjacent pair

6
simple games with cute winning strategies?
3
Remove a mark from any adjacent pair
4
How to prove the nonexistence of cycles in the game of Chain Reaction?
1
Number of ways a board can be found within a game
6
tiles covering a $7\times 7$ square
2
Minimum length of ascending sequence on a chessboard
1
Please explain the proof of the Mutilated Chessboard Problem
15
Tic-tac-toe with one mark type