Well if one looks at the formula of circular permutations $Pc = (n-1)!$

But as we come to that formula, I need a concrete example and an explanation.

Another thing, I have seen that when working with a bracelet, the formula changes. A concrete example please along with an explanation

Finally how the formula is worked when there are repeated elements that are permuted.

Consider an arrangement of blue, cyan, green, yellow, red, and magenta beads in a circle. 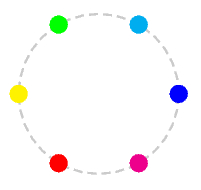 For this particular arrangement of the six beads, there are six ways to list the arrangement of the beads in counterclockwise order, depending on whether we start the list with the blue, cyan, green, yellow, red, or magenta bead. They correspond to the six linear arrangements shown in the rows below. 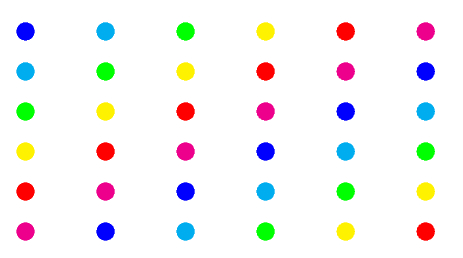 Conversely, each of these six linear arrangements can be transformed into the circular arrangement above by joining the ends of a row.

Unless other specified, only the relative order of the objects matters in a circular permutation. Therefore, circular arrangements are considered to be rotationally invariant.

Alternatively, given $n$ objects, we measure the order relative to a given object. Fix that object. As we proceed counterclockwise around the circle, the remaining objects can be arranged in $(n - 1)!$ orders.

Now suppose we place these beads on a bracelet.

Observe that if you remove the bracelet at left from your wrist, twist it through a half-turn, then place it back on your wrist, it will look like the bracelet at right, where the beads are arranged in the opposite order as you proceed counterclockwise around the circle. Thus, we can form the same bracelet by arranging the blue, cyan, green, yellow, red, and magenta in clockwise or counterclockwise order. Hence, the number of bracelets we can form with the six beads given above is $$\frac{5!}{2}$$

This is a much trickier problem. To see why, consider an arrangement of nine blue and three red beads in a circle. Two such arrangements are shown below.

While that observation solves this particular problem, in general, you will need to master the use of Burnside's lemma to handle these problems.

Think of $n$ distinct object around a round table.

if we put one in a certain position,say we put $a_1$ on the top of the table, then the others can permute linearly,Thus the number of permutation is $$(n-1)!$$.

which can be done in $n!$ different ways.

Observe that we can do this rotation in $n$ many ways,since we can rotate $n$ times clock-wise and still have the same configuration.

therefore if we let $x$ be the number of $ distinct$ permutations,

The table in the big conference room at the Hall of Justice is shaped like a horseshoe. How many ways can we seat the Superfiends (Batman, Superman, Wonderwoman, Aquaman) around this table. $4!$

The small conference room has a circular table. Furthermore the door is invisible. We do not distinguish who is at the head of the table (there is no head) or at an end of the table. In order to count the possibilities, we fix Superman's (Superman was chosen arbitrarily) position, and discuss all seating arrangements relative to Superman. There are $3!$ ways to seat the table (one of 3 people sit Supe's left, once that person is seated, one of 2 remaining can sit at his right, and one the last person across.)

Not the answer you're looking for? Browse other questions tagged combinatorics group-theory permutations or ask your own question.

2
Arranging n people in a circle
3
10 people to be seated in 2 tables with 4 and 6 chairs respectively.

0
What does it mean for repetition to be allowed when we're counting things?
5
Sum of Permutations of n objects taken r at a time ( r=1 to n ) where objects may be groups of same entities
0
When to use circular permutation vs when to use linear permutation?
0
Finding all positive integers $k$ such that $\sigma$ and $\pi^k$ are conjugated
7
Point out my Fallacy, in combinatorics problem, please.
1
Counting permutations of distinct items with repetition allowed and compulsory inclusion of some items
1
What to call permutations up to relabeling?
0
Combinatorics : relationship between Combinations and Permutations with similar objects
1
Partial Derangement formula for permutation with repeated elements