Given two points on a unit sphere, how to express their angular difference in spherical coordinates?

Edit: these images should clarify my intentions. 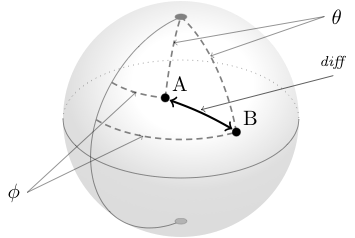 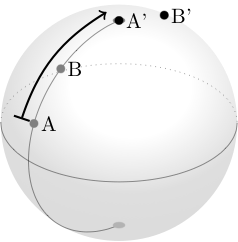 The left image shows an angular difference. But I understand that a coordinate-wise difference is not sufficient. To show an example, please look at the right image.

The case you described is a change from one spherical coordinates system to another by exchanging the former zenith axis with a new direction expressed as a point on the sphere.

You might want to have a look at the solution of these questions:

Another method that worked for me is to do two rotations: 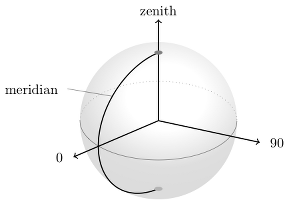 If you need to implement the rotation of a point around an arbitrary axis, it is necessary to use quaternions which should be provided by your language's libraries. For C/C++ I recommend glm. I computed the rotation in XYZ-coordinates and transformed the resulting unit vector back to spherical coordinates.

The original question says "θ is longitude, ϕ is latitude in [0,π]", but in the associated diagram, θ is shown as colatitude, and ϕ as longitude.

Which is correct for the following discussion?

Not the answer you're looking for? Browse other questions tagged spherical-coordinates angle or ask your own question.