Determine if a line segment passes "through" a triangle ...

I apologize because in a previous post I asked how to determine if a line passes through a triangle; and an answer was given. Then, while testing, I came across the scenario where a vertical line “segment” was below the base of the triangle and the answer to my previous question was giving false positives. This was my own fault because clearly there is a difference between a line and a line segment.

Below is a diagram of what I would like to accomplish. All the green line segments are considered to be passing "through" the triangle. The red line segments (obviously) do not. 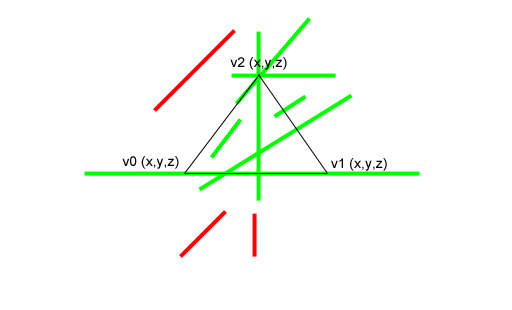 The data I am using has x, y and z values, but for this test, we can assume the triangle and line segment will be coplanar.

The triangle I am using for testing is defined by the points:

and each of my tests cases are using these points:

Is there some specific formula that will provide a “true” / “false” indication as to whether a line segment passes over the triangle as described above?

I do NOT need to know the point of intersection in the case of a "true" result (but if it is part of determining the result, that would be a bonus).

Thank-you in advance for your help and patience.

Two conditions must be met:

In the example, two vertices are on the right of PQ and one on the left so that line crosses. It crosses the orange and red sides. Then P and Q aren't on the same side of the orange line. 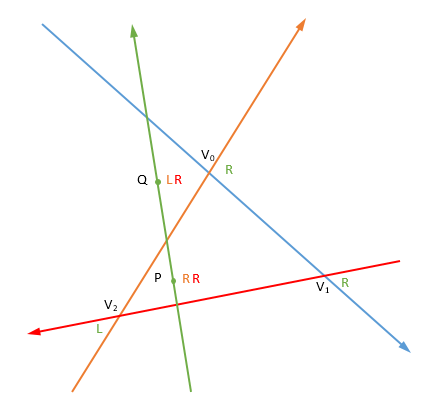 The features of (normalized) barycentric coordinates that I’ll make use of are the following:

Otherwise, we have two exterior points. Thanks to the linearity of Cartesian-to-barycentric mapping, the line through $\mathbf P$ and $\mathbf Q$ can be parameterized as $(1-t)\,\mathbf P+t\,\mathbf Q$ in both coordinate systems, with $t\in[0,1]$ giving the line segment. Values of $t$ for which a barycentric coordinate of the above linear combination is $0$ are the intersections with the corresponding side lines. These values of $t$ are easily found to be $t_i={\lambda_i\over\lambda_i-\mu_i}$, unless $\lambda_i=\mu_i$ in which case the line is parallel to that side of the triangle. The line segment intersects the triangle if any of these side line crossings occurs on the triangle. In addition, for a line segment with two exterior end points to intersect the triangle, there must be at least two side line crossings, regardless of where those crossing points are.

So, compare the corresponding barycentric coordinates of $\mathbf P$ and $\mathbf Q$. If fewer than two pairs have opposite signs, then the segment doesn’t intersect the triangle and we’re done. Otherwise, for each such coordinate pair $\lambda_i$ and $\mu_i$, compute the intersection point ${\mu_i\over\mu_i-\lambda_i}\mathbf P+{\lambda_i\over\lambda_i-\mu_i}\mathbf Q$. (It might be more convenient to use $1-{\lambda_i\over\lambda_i-\mu_i}$ instead for the coefficient of $\mathbf P$.) If any of these intersection points lies on the triangle, then the segment intersects the triangle.

The above computations were for points in $\mathbb R^2$, but you’re working in $\mathbb R^3$. Affine transformations preserve lines, their intersections, and relative segment lengths along a line, so the problem can be made two-dimensional via a parallel projection onto any convenient plane that’s not orthogonal to the plane of the triangle. Projecting onto one of the coordinate planes is simplest since that just involves dropping one of the Cartesian coordinates. If you’re using the $3\times3$ coordinate transformation matrix, projecting onto $z=1$ is convenient since that sets the third coordinate to $1$ as required to use the matrix.

It’s also possible to avoid an explicit projection if the triangle’s plane doesn’t pass through the origin. In that case, the areas of triangles on the plane are proportional to the volumes of tetrahedra defined by the triangle vertices and the origin, so we can use triple products of the points directly to compute barycentric coordinates. That is, we can compute $$\mathbf\lambda=\begin{bmatrix}(\mathbf v_1\times\mathbf v_2)^T\\(\mathbf v_2\times\mathbf v_0)^T\\(\mathbf v_0\times\mathbf v_1)^T\end{bmatrix}\mathbf p$$ using the raw coordinate triples of these points. If the triangle’s plane goes through the origin, shift all of the points by a small distance in a direction not parallel to the plane.

This solution is fundamentally similar to the one given by Nominal Animal. However, using barycentric coordinates allows all of the triangle’s sides to be treated uniformly. Also, if you think about it a bit, you’ll see that these computations are a series of “left-of” tests, unrolled.

The cross-product form of the Cartesian-to-barycentric mapping prompts me to toss this out as well, though I doubt that it’s as efficient as other solutions that have been presented. It takes advantage of the fact that in $\mathbb{RP}^2$, the line through two points and the intersection of two lines can both be computed by taking cross products of homogeneous coordinate vectors. Thus, the coordinate mapping matrix can be seen as having the three side lines of the triangle as its rows.

The barycentric coordinates of the three side line intersections can be computed “in bulk” as $B(\tilde{\mathbf p}\times\tilde{\mathbf q})_\times B^T$, where $B$ is the coordinate transformation matrix from above and the central matrix is the “cross-product matrix” defined as follows: for any vector $\mathbf w=(w_1,w_2,w_3)T$, $$\mathbf w_\times=\begin{bmatrix}0&-w_3&w_2\\w_3&0&-w_1\\-w_2&w_1&0\end{bmatrix}.$$ As before, you will need to check if any of these points are on the triangle and you will also have to check that viable candidates for the triangle intersections fall between $\mathbf p$ and $\mathbf q$. Moreover, these coordinates will be unnormalized, so you’ll have to take that into account when making these tests. You will also have to deal with points at infinity, which will be produced when the segment is parallel to one of the sides of the triangle. In barycentric form, the coordinates of points at infinity sum to zero.

Next, we check the possible cases, one at a time (but in whatever order you want):

Not the answer you're looking for? Browse other questions tagged geometry triangles computational-geometry or ask your own question.

3
Determine if a line passes through a triangle ...

1
Find length of segment in triangle
4
Perpendicular line passing through the midpoint of another line
6
Simplest graph that is not a segment intersection graph
0
Can we take any decision about the quadrants, through which a line-segment passes, from its slope?
3
Determine if a line passes through a triangle ...
1
Given a ratio, prove that a variable line passes through one fixed point
0
Can you compute line segment that crosses a triangle?
2
Line segments intersecting at the nine-point center
0
Show that the circumscribed circle passes through the middle of the segment determined by center of the incircle and the center of an excircle.