Finding the largest equilateral triangle inside a given triangle

She also came up with the following heuristic/conjecture: take the largest angle of the given triangle. (It is guaranteed to be at least $60^\circ = \pi/3$, as not all three angles of a triangle can be less than that.) Now the answer (the largest inscribed equilateral triangle) can be found among those made by marking off a $60^\circ$ angle at that vertex, with the two ends chosen somehow. (In other words: the inscribed equilateral triangle can be chosen to have that vertex as one of its vertices.)

My intuition for geometry is not so good. :-) I played with a few examples in Geogebra and couldn't find any counterexamples, nor could I think of a proof, so I'm asking here.

This is similar to Find the maximum area possible of equilateral triangle that inside the given square and a special case of Largest Equilateral Triangle in a Polygon (whose paper I don't have access to—all I could find via citations to that paper is that it gives an $O(n^3)$ algorithm—and in any case the problem may be simpler for a triangle). 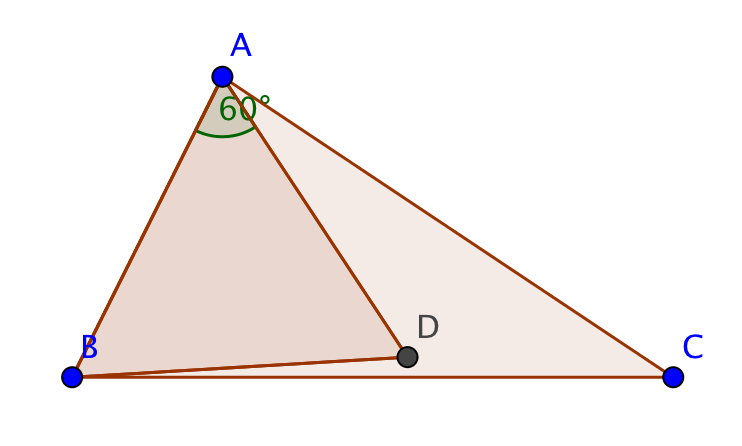 Consider an arbitrary triangle PQR. Excluding the trivial case of an equilateral triangle, either one or two of the angles are at least 60 degrees, and wlog let P be the minimal example of these. I.e. P is the smallest angle of at least 60 degrees, and Q is either the largest angle or the second largest after P. Then the largest enclosed equilateral triangle (call it E) has one vertex at P.

Otherwise the second vertex is at Q.

Motivation: The interesting case to consider is a triangle of angles 62, 89, 29 degrees. (Actually this is almost exactly the OP's triangle ABC above. 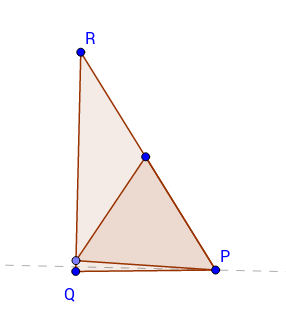 If Q<90, there will be a local maximum E based on P and Q. The diagram shows the perpendicular dropped from P to QR, and shows that there will be an equal E if it is possible to rotate this about P so that the vertex on QR is the same distance on the opposite side of the perpendicular. In this case, since angle Q is 89 degrees, we need to be able to rotate E through 2 degrees, which is exactly possible. Of course if angle Q is more than 90 degrees, rotation will always increase the size of E.

This is a sketch of an answer; it depends on proving that one vertex of E is at a vertex of PQR, and a messy set of cases for optimisation. But I hope I have captured the distinction between the two cases illustrated by (62, 89, 29).

Let $T$ be the given triangle, having vertices $A_i$, angles $\alpha_i$, and edges $a_i=[A_{i-1},A_{i+1}]$. Use $\triangle$ as variable for equilateral triangles contained in $T$, and denote the vertices of such triangles by $v_j$. Given an instance $I:=(\triangle, T)$ call the number of incidences $v_j\in a_i$ the defect of this instance. Then one has

Lemma. If the defect of the instance $I$ is $\leq3$ then $\triangle$ is not maximal.

We therefore have to consider only instances $I$ with a defect of $4$ or more (the latter can happen if one or three of the $\alpha_i$ are $=60^\circ$). A defect $\geq4$ can be realized in the following ways:

In this way the problem has been reduced to the (computational) analysis of a finite number of cases.

If $T$ has two angles $<60^\circ$ then we have to compare the three colored $\triangle$s in the following figure. It is obvious that the red triangle is the largest.

Take the two vertices on the shortest side and draw circles from each to the other: 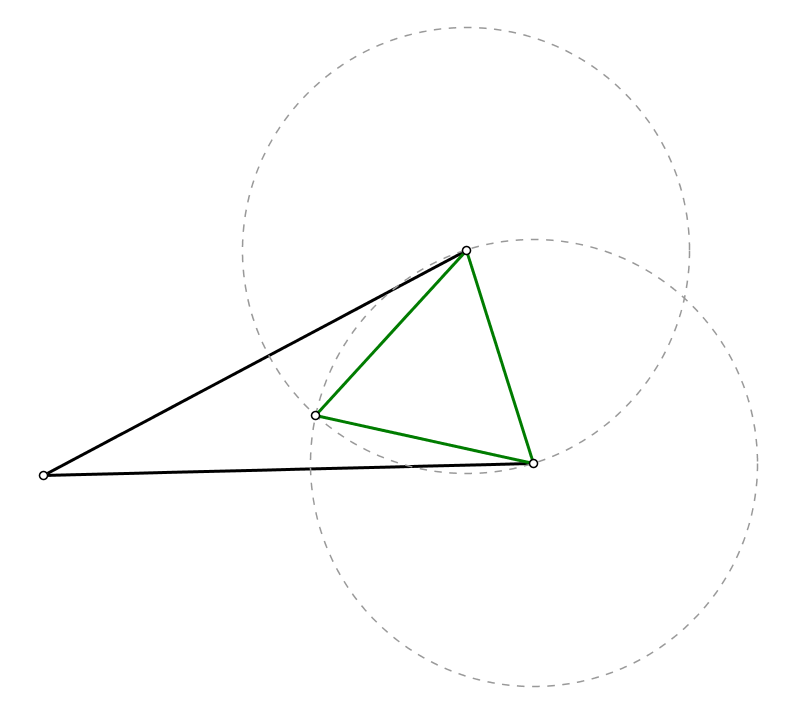 If the circles intersect within the triangle as above, the largest equilateral is as shown in green. It can be seen that if the green triangle is rotated around either vertex, it will have to be smaller.

If the circles don't intersect within the triangle as in the following case: 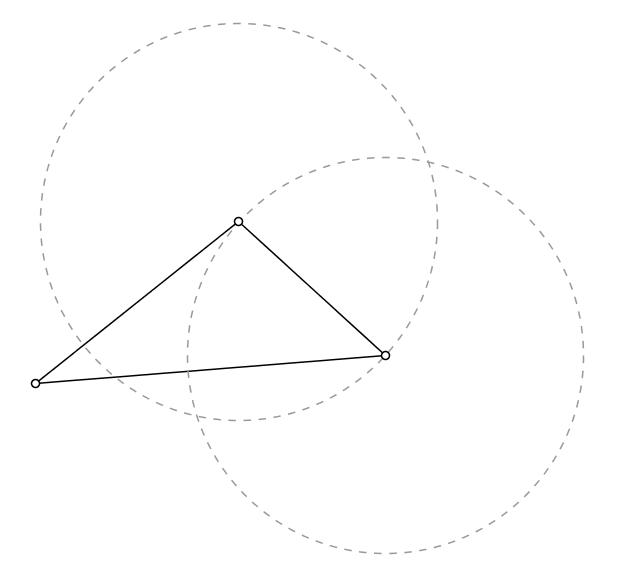 ...then draw a perpendicular from the vertex opposite the longest side and form the equilateral as shown: 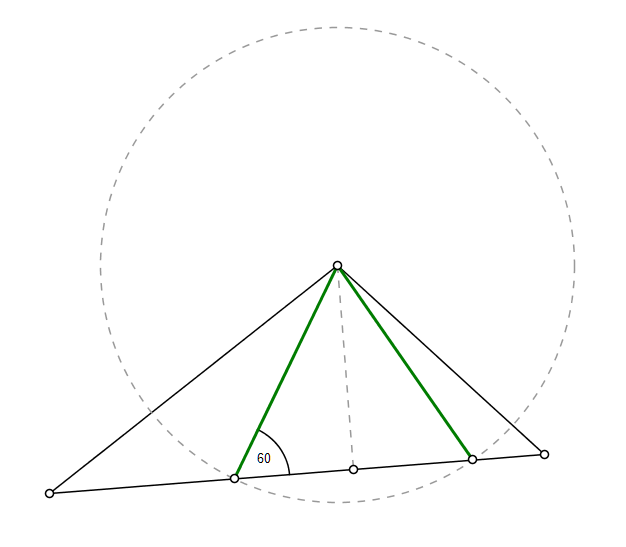 In that case it can also be seen that if the green triangle is rotated around the vertex it would have to be smaller.

EDIT: One more case where the inscribed triangle occupies none of the vertices

But that isn't optimal since the triangle can be rotated to afford more room. 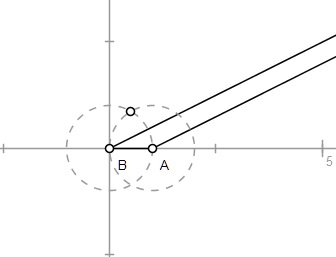 My answer is not a formal one and is mainly based on qualitative reasoning and some goniometry. It follows the remarks of @Christian Blatter and tries to complete them.

The generic triangle $T$ on which to inscribe the maximum equilateral triangle $T_e$ (whose side we'll call $w$) can be uniquely specified by the lenght $c$ of one side $AB$ and by the adjacent angles to this side $\alpha$ and $\beta$ (see figure). Naturally it must be $\alpha+\beta\le 180^\circ$ 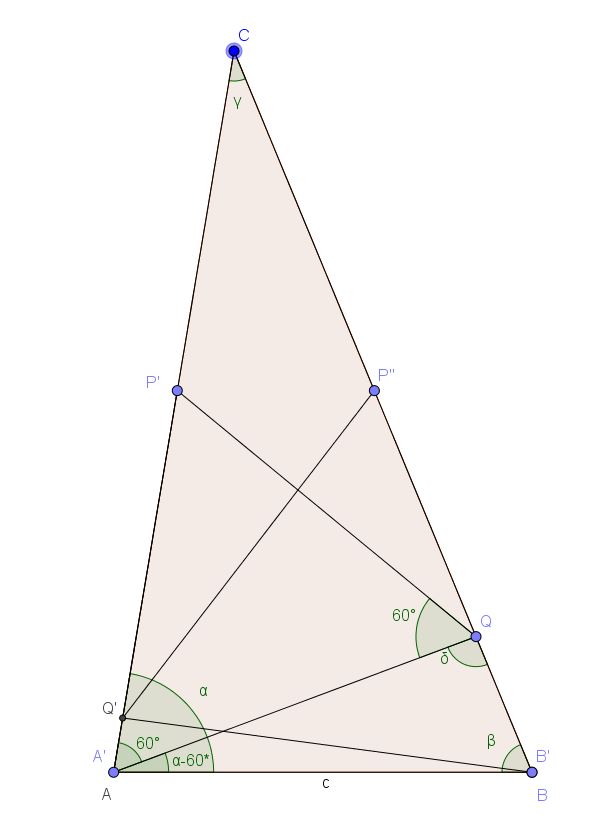 There are two main cases for the ampliude of the angles:

Moving the vertex of $T_e$ from, say $B$ to another point $B'$ its like working on another triangle $A', B', C$ with reduced size. The inner equilateral triangle will also have a reduced size (this part could be right but should probably need some more detail).

I think that the optimal strategy for positioning the $T_e$ with maximum size is: 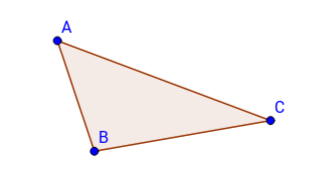 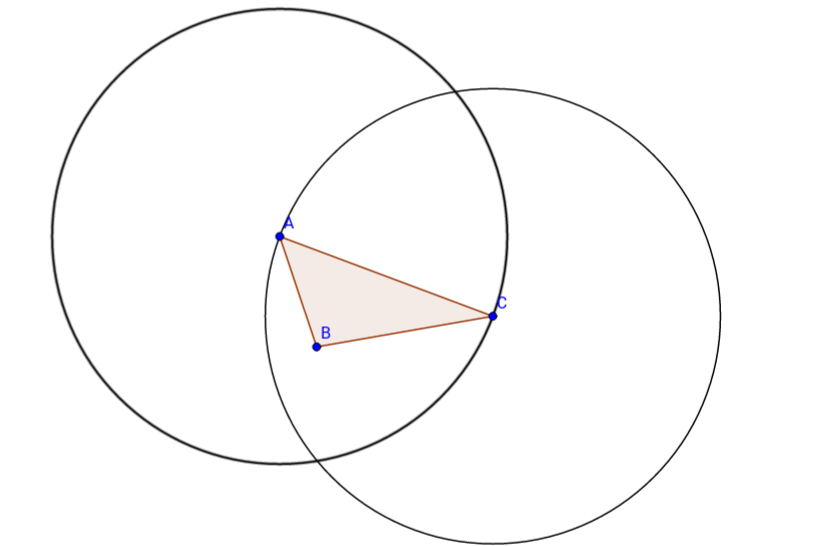 2. Mark D, the intersection point of the two circles, and draw intervals DA and DC. 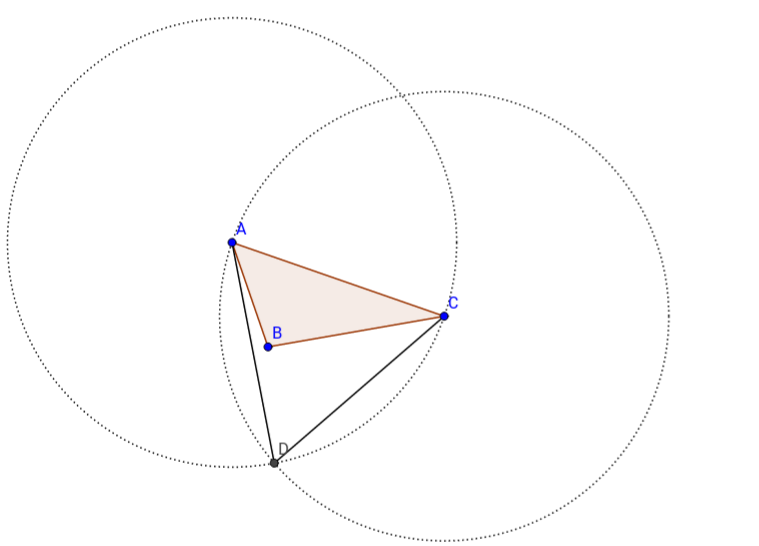 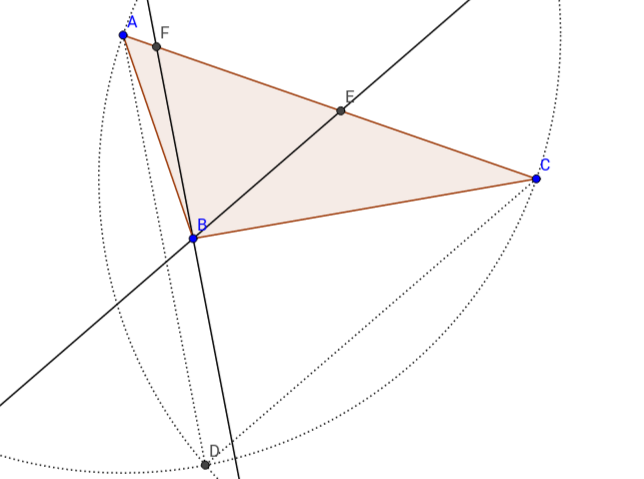 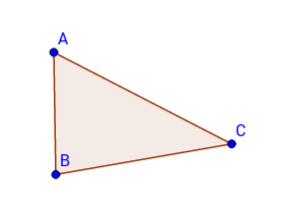 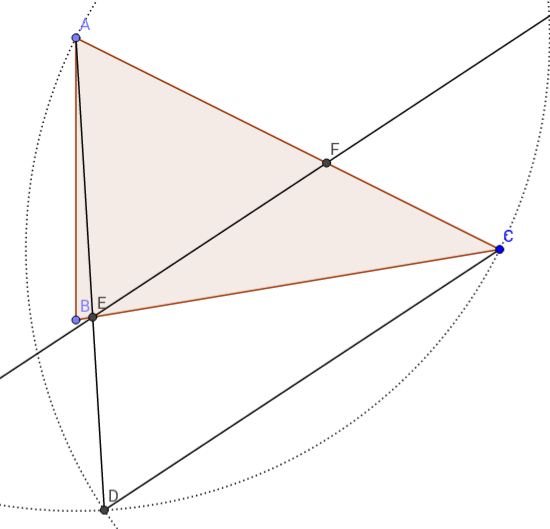 The proofs are elementary: corresponding angles between parallel lines are equal.

This is a late attempt to contribute to an interesting discussion I only recently became aware of. I hope the question is still alive.

If only one angle in the given triangle is greater than $60^o$, then the greatest inscribable equilateral triangle shares a vertex with this greatest angle and has its base on a portion of the opposite side, as in the OP's first figure.

Presuming this as agreed on, and also that the greatest equilateral triangle must share at least one vertex with the given triangle, I consider only the case where two angles are greater than $60^o$,

1) showing that the greatest equilateral triangle does not always share a vertex with the largest angle in the given triangle, while

2) revealing the conditions under which it does, and

3) the method for finding the greatest equilateral triangle when it does not.

Suppose two angles of the given triangle are greater than $60^o$ and equal. 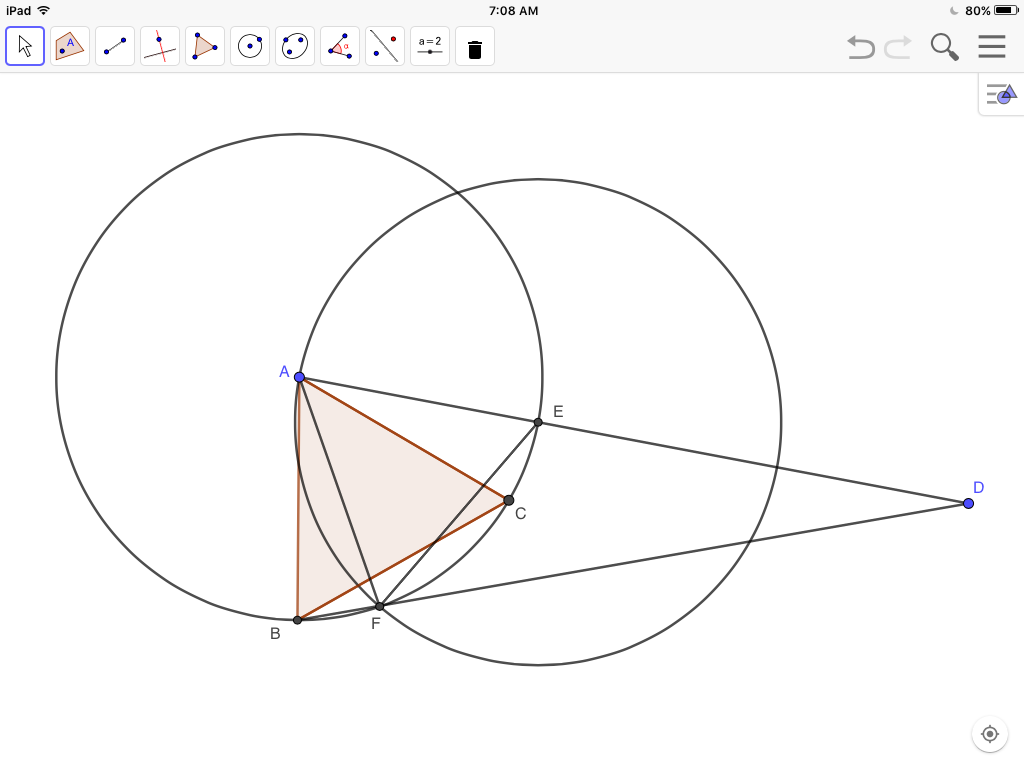 In isosceles triangle $ABD$, the greatest equilateral triangle has $AB$ as base when the base angles of $ABD$ are greater than $60^o$ but less than $80^o$, i.e.$$\frac{\pi}{3}<\angle DAB=\angle DBA<\frac{4\pi}{9}$$ For if on $AD$ we make $AE=AB$ and construct equilateral triangle $AEF$, vertex $F$ lies outside of triangle $ABD$ unless$$\angle ABF\le\angle ABD$$If $\angle ABF=\angle ABD$, as in the figure above, then $\triangle ABD$ and $\triangle BFA$ similar isosceles triangles, 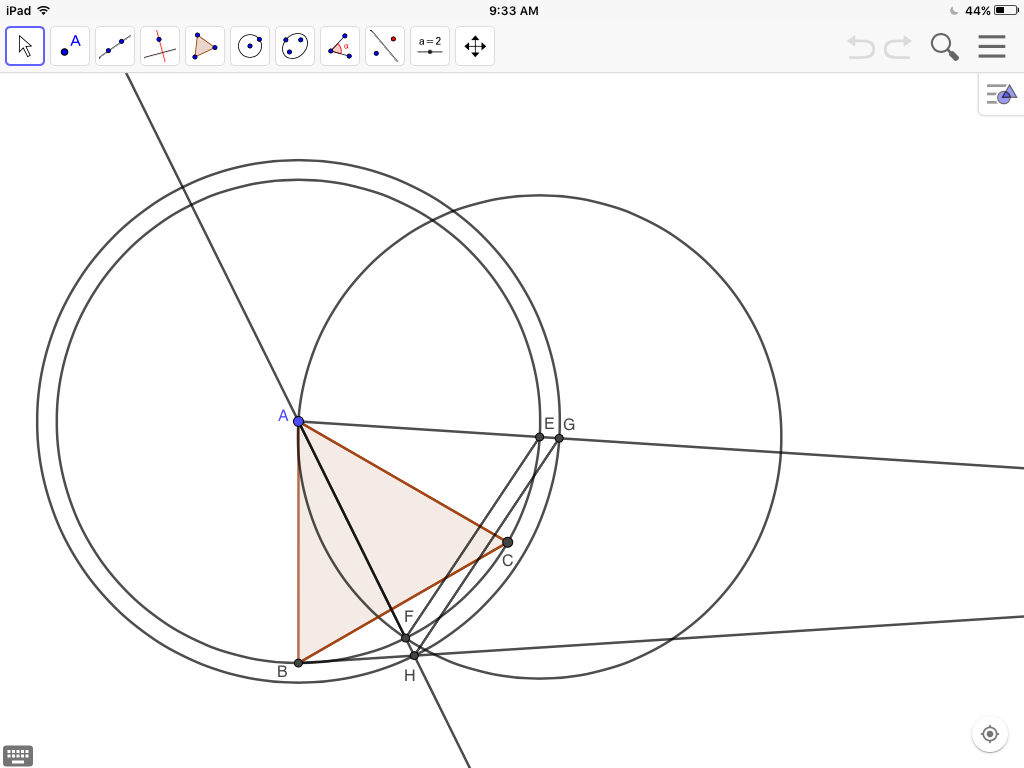 Accordingly, in the second figure (vertex $D$ of isosceles $\triangle ABD$ is out of view on the right), $F$ is within $\triangle ABD$. The maximum equilateral triangle $AHG$ is constructed by extending $AF$ to $H$ on $BD$, drawing a circle with radius $AH$, cutting $AD$ at $G$, and joining $HG$.

If two angles of the given triangle are greater than $60^o$ but not equal, then the greatest equilateral triangle is either on the side between the vertices of these two angles, or shares a vertex only with the lesser of the two angles. 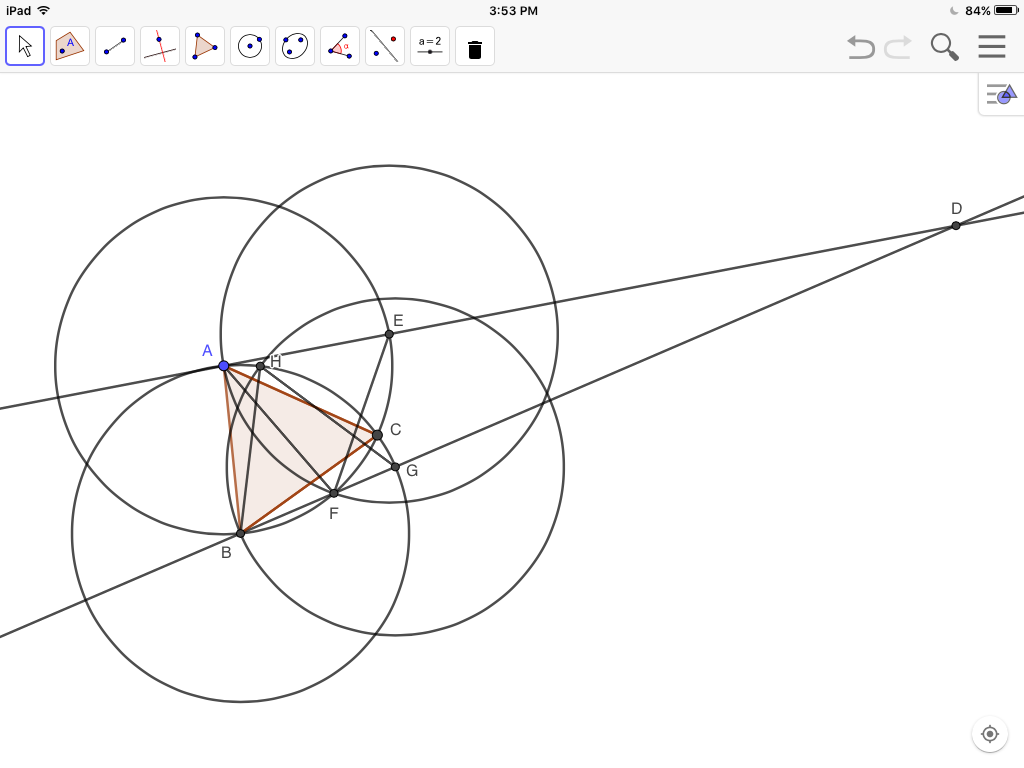 Therefore, $H$ lies within $\triangle ABD$, and, by the method already indicated in the second figure, an equilateral triangle greater than $\triangle BGH$ can be constructed on $BD$, sharing a vertex with the angle at $B$, which is less than the angle at $A$.

Although this case by itself, i.e. where $F$ lies on $BD$, proves that the conjecture is not always true, it appears that when two angles are greater than $60^o$ the conjecture is in fact universally false: when $D$ is remote enough so that $H$ and $F$ both lie within $\triangle ADB$, the greatest equilateral triangle inscribable on $BD$ with vertex at lesser angle $B$ is always greater than that inscribable on $AD$ with vertex at greater angle $A$. 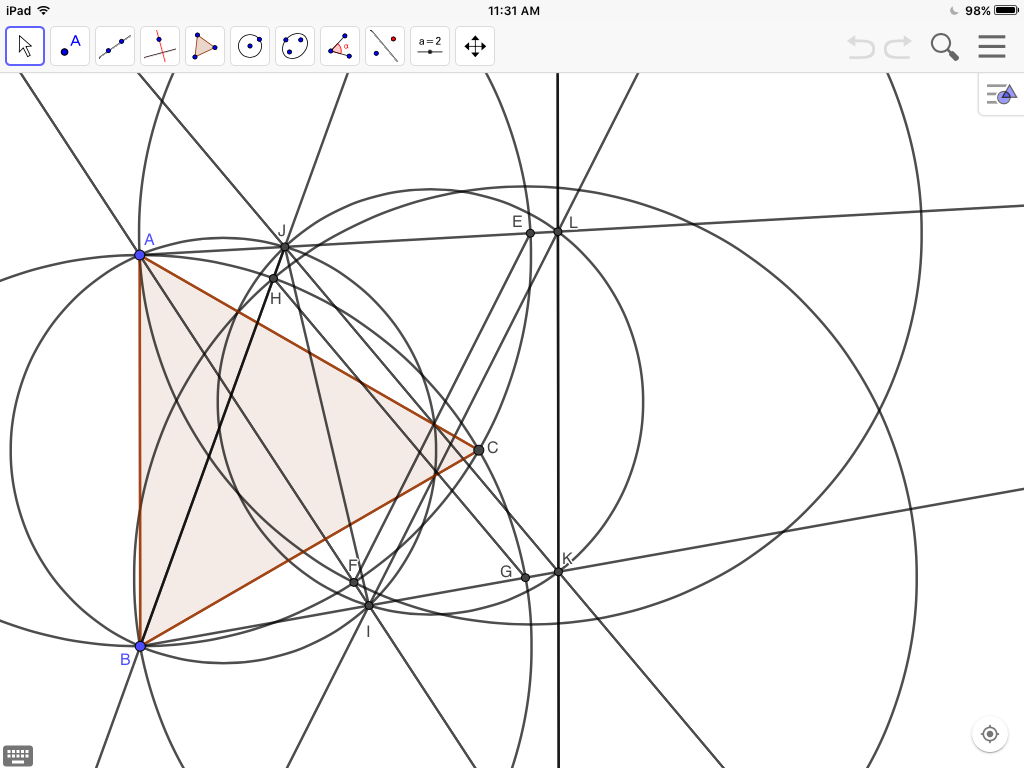 Not the answer you're looking for? Browse other questions tagged calculus geometry optimization algorithms maxima-minima or ask your own question.