What is degree of freedom in statistics?

However, it is still hard for me to understand the concept intuitively.

Could anyone provide a intuitive explain to the concept and anything can help me understand?

I'm NOT asking how to calculate degree of freedom.

Let me give an example: 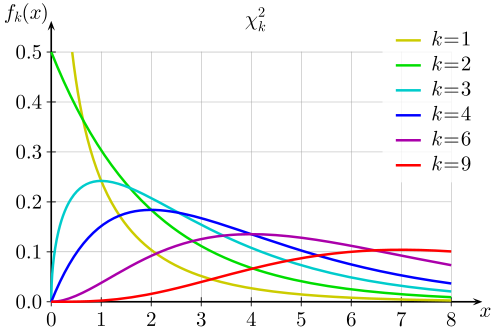 Intuitively degrees of freedom denotes how many independent things are there. As we introduce constraints, we take away the degree of freedom.

First I'll try to answer your question about Chi-square.

I'll start with mechanical example, as degree of freedom is similar in every field.

Consider an airplane flying. It has three degrees of freedom in the usual universe of space, and can be located only if three coordinates are known. These might be latitude, longitude, and altitude; or might be altitude, horizontal distance from some origin, and an angle; or might be direct distance from some origin, and two direction angles. If we consider a given instant of time as a section through the space-time universe, the airplane moves in a four‑dimensional path and can be located by four coordinates, the three previously named and a time coordinate.Hence it now has $4$ d.f.

Note that we assumed that plane is not rotating.

Consider the calculation of mean $\frac {\sum_{i=1}^n X_n }{n}$, we are interested in estimation of error which are estimated by residues. Sum of residuals is $0$. Knowledge of any $n-1$ residues gives the remaining residue. So, only $n-1$ can vary independently. Hence they have $n-1$ d.f.

However d.f is mainly used in regression analysis, and ANOVA. You may note that all the distributions with so called d.f correspond to particular cases in linear statistics. Hence d.f is at the best artificial as they are not constraints on the random variable, but are actually degree of freedom of some quantities in some application from where these distributions originated.

Also, For people who are interested, < http://courses.ncssm.edu/math/Stat_Inst/Worddocs/DFWalker.doc > seems to be quite good read.

Two people are sitting at a bar, you and your friend. There are two sorts of juice before you, one sweet, one sour. After you have chosen your drink, say the sweet one, your friend has no more choice - so degree of freedom is "1": only one of you can choose.

Generalize it to a group of friends to understand higher degrees of freedom...

When you estimate parameters in statistics, suppose you use a parameter (which you have estimated) to estimate another parameter, then you lose $1$ degree of freedom and you end up with $n-1$ degrees of freedom where $n$ is the number of 'individuals' in the population with which you are working.

One example is when working with normal distributions

let $s$ be the estimate of the population standard deviation ($\sigma$). We use the mean value $\bar x$ instead of $\mu$.

I've always viewed "degrees of freedom" as a measure of the number of choices that are available to you in a situation. This of course is not meant to be rigorous, but works intuitively in examples.

Consider the problem of choosing a polynomial of degree $2$ (with coefficients in some fixed field $k$). Then we have three choices to make, corresponding to the selection of $a_0,a_1,a_2$ in $$f(x):=a_2x^2+a_1x+a_0.$$ We should then expect the number of degrees of freedom in this example to be three. And indeed, the space of such polynomials is a vector space, of degree $3$. If we suppose now that we only care for polynomials admitting $x=1$ as a root, we have -- on an intuitive level -- used up one of our degrees of freedom, and we should expect to be able to make two more independent choices. This is indeed the case: we are left with a vector space of dimension $2$.

Note that these notions only really make sense for vector spaces and "choices" that correspond to the intersection of hyperplanes. This all can be generalized within the framework of algebraic geometry (and intersection theory), but matters become complicated when hypersurfaces need not intersect as expected.

To understand the concept intuitively, ask the question of why it is needed. And start from a simpler question, why is the variance computed as $V = \frac 1 {N-1} \sum (x_i-\bar x)^2$ with a $N-1$ as denominator.

You have to correct the bias.

When you follow the computations, you start by replacing $\bar X$ by its definition $\bar X = \frac 1 N \sum X_i$, develop the squares, expand the sum, and then one of the term disappears. Namely $N\bar X=\sum X_i$ appears twice with opposite sign, negative in the double product $2 \bar X X$ and positive in the square $\bar X^2$. So $\sum (X_i-\bar X)^2$ is the sum of $N-1$ terms equal in expectation.

In two words, the degree of freedom is the number of independent relationships linking a set of variables, taking into account the variable introduced for intermediary estimators.