Understanding the graphic proof of homotopy

I am learning algebraic topology and reading Lee's book. Here he used the graphs to prove that two paths are homotopic. Although there is some explaination in the book, I can not understand clearly what does the graph mean, why we can draw it like this and how to use these graphs to prove two paths are homotopic. So may I please ask if someone could explain it to me? Thanks. 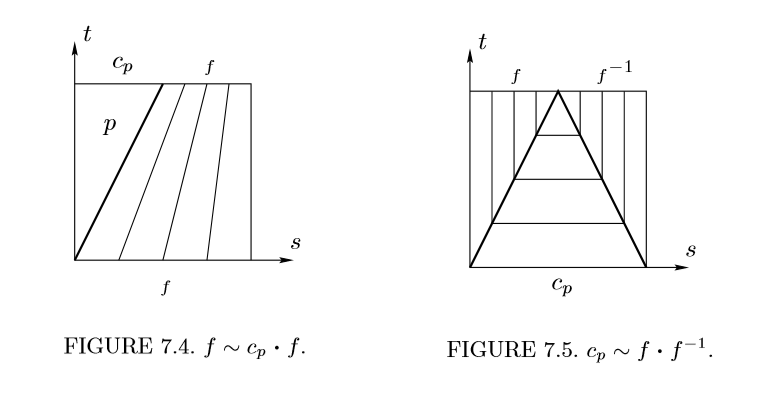 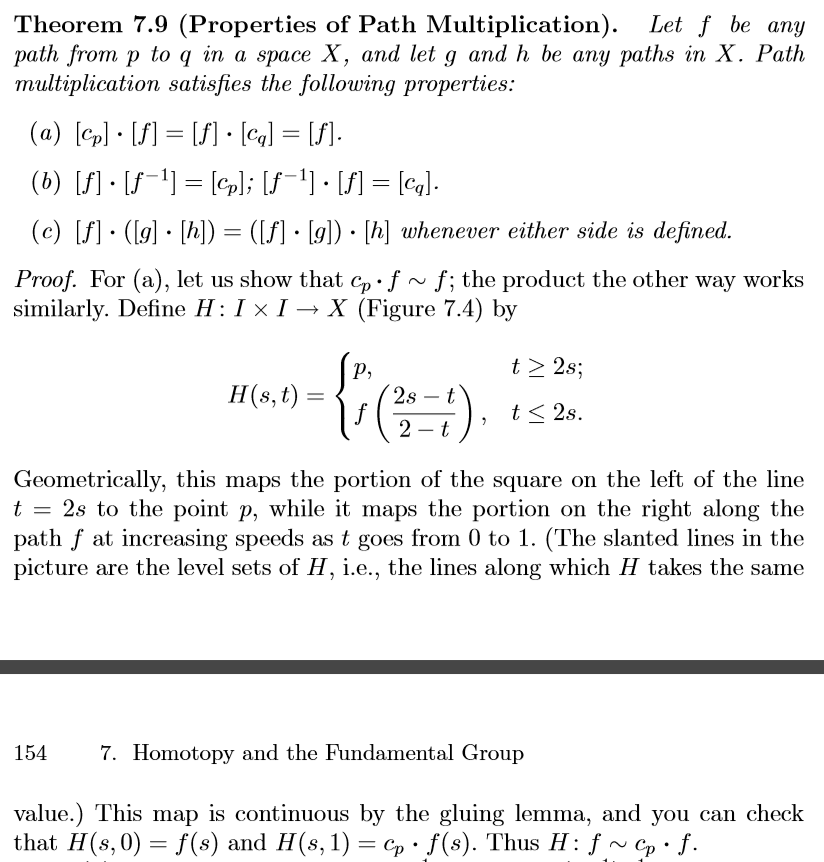 One is trying to define a map from $I\times I \to X$. The idea of these pictures is that he decomposes $I \times I$ into certain regions, on which the map is something easy to define. For example, the function that sends a region of $I \times I$ constantly to $p$.

This function is different from the one defined by the author, and in particular the domain is less nice (the domain is $s \in [t / ( 1+ t),1]$, which you can verify by some algebra), but maybe it brings out more clearly that the construction is an interpolation.

I'm tempted to call $s$ the spatial parameter and $t$ the time parameter, because if $t$ is fixed we imagine a path parametrized with coordinate $s$, and the path evolves as $t$ changes.

Then you use the following lemma to glue together these partially defined functions into a continuous function. (The author calls this the gluing lemma.)

So the idea for building these kind of pictures is that we know what we want to homotopy to look like in certain situations, and so we write down analytic formula inspired by our intuition, and check that they glue using the above lemma. Generally this involves setting up various interpolations.

For the second picture, with words:

On each triangle write down an analytic expression for these descriptions, and check that they glue according to the lemma. Then the top gives you f followed by backwards f, and the bottom gives you the constant path, so the square gives you a nullhomotopy of $[f] [f]^{-1}$.

You can visualize this homotopy as follows: At first, we run f followed by f inverse. Then we run $f$ not quite to the end let it wait a bit and run f inverse from where we stopped $f$. We continue on in this way - this is how one might guess the decomposition of $I^2$ as in the second picture.

Hope it helps. I agree this is confusing.

This is a typical representation of a homotopy.

In particular, The author is asking you to interpret the "time" interval $[0,1]$ as a geometric object.

Not the answer you're looking for? Browse other questions tagged algebraic-topology homotopy-theory or ask your own question.

1
Path homotopy in two-holed torus
3
Understanding homotopy types
1
Intuitive understanding of homotopy of continuous maps
4
Is there any analogy between homotopy of spaces and homotopy between maps?
2
How to prove no homotopy of paths in $\mathbb{R}^2\setminus\{(0,0)\}$?
0
Understanding why path $p*p^{-1}$ is homotopic to the identity/trivial loop
0
Proof of a basic theorem in Algebraic topology course related to homotopy
4
How to interpret homotopy diagrams