This was inspired by this Stack Overflow question.

It's currently on hold as off-topic and downvoted, so just in case it's deleted here's the screenshot (for us lesser mortals with less than 10K rep on that site): 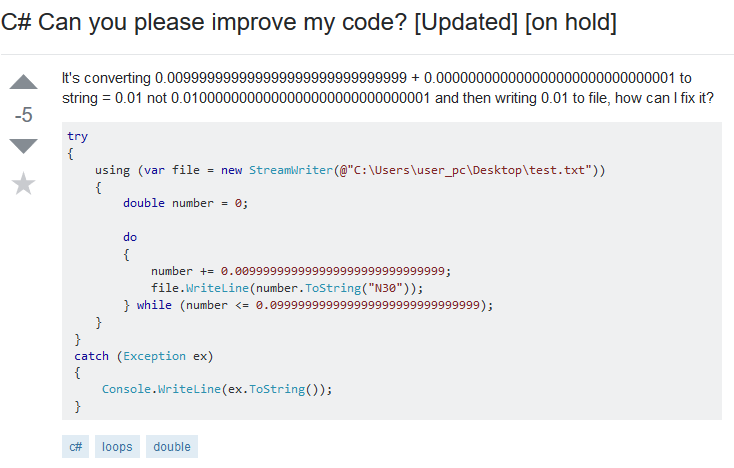 The program is trying to list all of the double values between these two numbers:

The code in the screenshot won't actually do that, but let's leave that aside for now.

For those who are unfamiliar with the C# type system, a double is a floating-point number (which is used to represent real numbers) with the following attributes:

The Double value type represents a double-precision 64-bit number with values ranging from negative 1.79769313486232e308 to positive 1.79769313486232e308, as well as positive or negative zero, PositiveInfinity, NegativeInfinity, and not a number (NaN). It is intended to represent values that are extremely large (such as distances between planets or galaxies) or extremely small (the molecular mass of a substance in kilograms) and that often are imprecise (such as the distance from earth to another solar system). The Double type complies with the IEC 60559:1989 (IEEE 754) standard for binary floating-point arithmetic.

The other thing to understand is Double.Epsilon, which is the following constant:

The value of the Epsilon property reflects the smallest positive Double value that is significant in numeric operations or comparisons when the value of the Double instance is zero...

As an experiment, I tried the following program to get a better sense of the size of the number (never expecting it to actually complete execution):

I strongly suspect that you could either do some form of arithmetic on the exponents or possibly set this up as a permutation of some kind; is there an equation that can describe this problem?

If you have the right tool available, you could just get the binary representation of $n_1$ and $n_2$ and subtract them. As the floating point representations are ordered the same way the corresponding values are, that will give you the count. Remember to subtract one because you shouldn't count either end.

Not the answer you're looking for? Browse other questions tagged arithmetic computer-science floating-point or ask your own question.