Example of countably infinite sets that is connected?

This question arises after the realisation that countable sets and uncountable sets does not necessary differ in the way where the former has gaps while the latter has no gaps. The best topological notion that capture the property of gaps is total disconnectedness. Quoting Wikipedia:

A totally disconnected set is a set $S$ where the only connected subsets are the singletons and the empty set.

$\Bbb{Z},\Bbb{N}$ are totally disconnected because they are discrete.

$\Bbb{R}$ is connected "everywhere" (under the open interval topology) since any intervals cannot be wrote as unions of open intervals without overlapping.

whereas $\Bbb{Q}$ is totally disconnected as between any two rationals, we can pick an irrational $r$ and construct open intervals $(-\infty,r)\cup(r,\infty)$ to separate them.

and via the proof here, the p adics $\Bbb{Z}_p$ are also totally disconnected

All ordinals, and in general, well ordered sets, are totally disconnected. Take any ordinal $\alpha$ as an example, as shown here, we can take the partitions $\{[0,\beta +1)\cup(\beta,\infty),\beta \in \alpha\}$ thus the only connected components are the singletons.

So we basically have the following table: 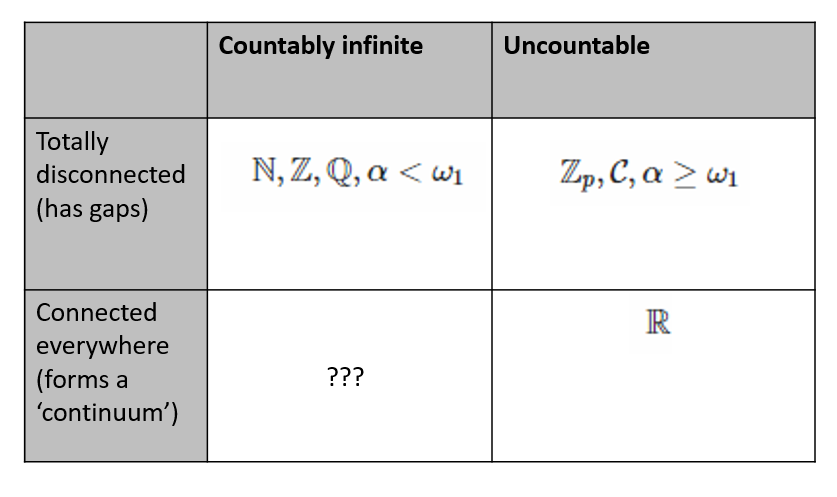 Regardless of whether we accept or reject the axiom of choice, (generalied) continuum hypothesis. Using ZF, do non well ordered countably infinite sets $X$ which has no gaps exists (i.e. can we have a "countable continuum", analogous to how $\Bbb{R}$ formed a continuum), if yes what are the examples?

If such set cannot exists, what is the theorem that suggests that?

First of all, it is meaningless to talk about a set being "connected" or "totally disconnected". These words only have meaning when you are talking about a topological space, not just a set.

As for a countably infinite connected topological space, there are plenty of such spaces. The easiest example is to take any countably infinite set $X$ and give it the indiscrete topology, where the only open sets are $X$ and $\emptyset$. Intuitively, you can think of this as a "space" where all the points are right on top of each other, so you can't tell any of them apart (but there are nevertheless infinitely many of them).

It is connected, as any two non -empty open sets have infinite intersection. And if $Y$ is any infinite subspace of $X$ then $Y$ is homeomorphic to $X$, so $Y$ is connected. And if $p\in V\subset X,$ where $V$ is a nbhd of $p$, then $V$ is connected.

Not the answer you're looking for? Browse other questions tagged general-topology set-theory connectedness or ask your own question.