Packing problem -uniform distribution by Percentage of coverage - circles on a plane .

After reading the comments, I understood that in fact, my question was not so clear . so I will put it in simple terms of programming :

$per == Wanted Coverage in percentage .

An array of aligned ( x-axis && Y-axis ) circles with given radius ( $r ) distributed in $row,$column to cover the exact wanted percentage ( $per ) .

$per = Wanted Coverage in percentage .

An array of aligned ( x-axis && Y-axis ) with radius $r circles with the given distances between $row and $column, that will result in a coverage of exact $per of $a .

So, first, I am not a mathematician, and I only encounter kids-level math on my daily work when programming.

I need to write a simple CAD macro that given a wanted percentage coverage of a plane, and the diameter ( or radius ) of a "dot", actually a circle , will distribute the points in such distances to allow the exact wanted coverage percentage .

In other words : given the percentage of wanted coverage , circles size and plane size , what is the distance between the points ( straight line circumference , not center if possible )

Or with a simple image 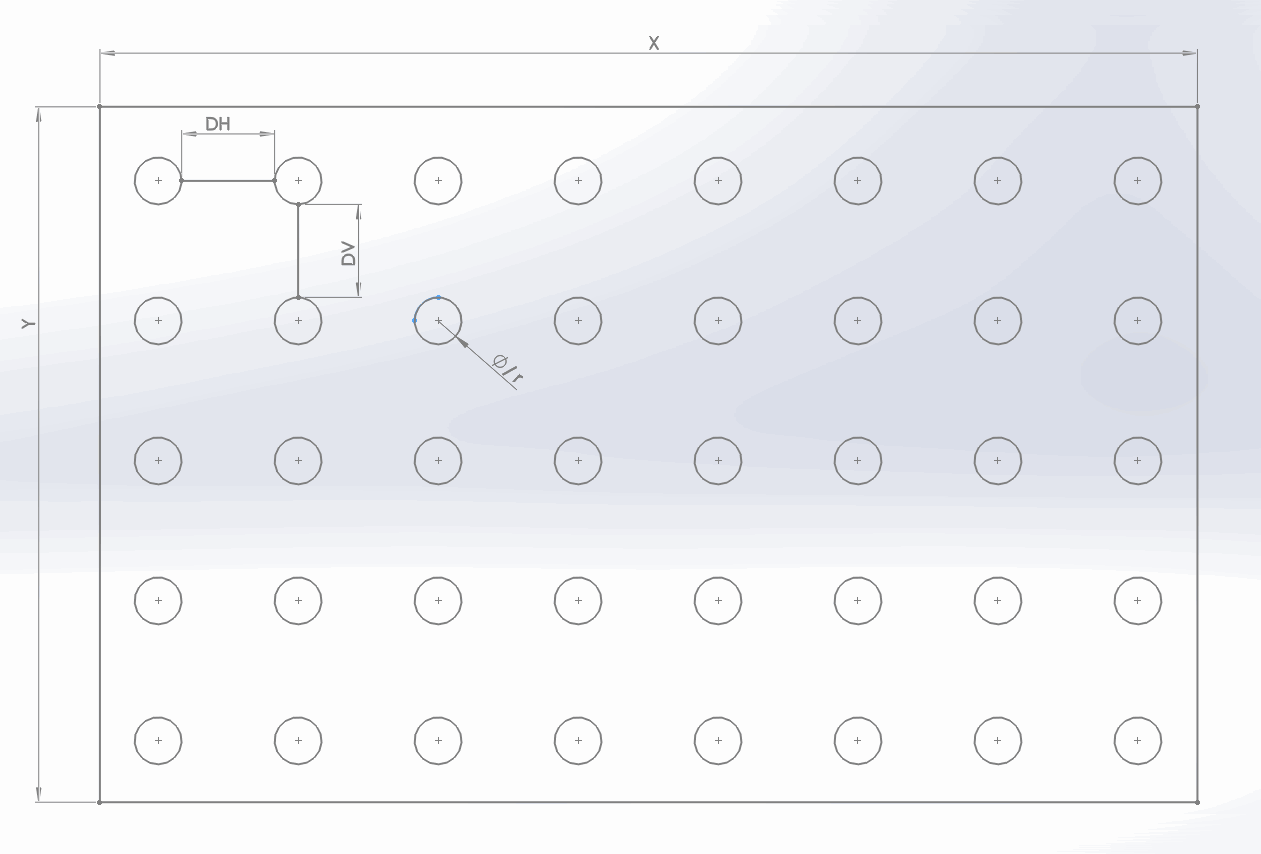 Given Y,X of a plane and [r] of circle, and wanted coverage percentage of plane by "dots" or circles ( say 32% ) how to know the distance D[H] - horizontal and D[V]- vertical

I know I also need to assume that the "dots" center in edge rows are on the edge itself, or alternative the distance from edges is equal to the distance between them ..

If it were a square and not a circle, I could have managed with very simple calculations . But now I am not sure of myself . Does calculating the circle area πr2 and subtracting from the coinciding square and then distribute the squares will work ? (Later I also need the reverse - given the distances and the percentage - calculate the circles diameter ( or r )

I ended up using some combination of the first answer by Kimchi lover and second Ross Millikan .

Both valid as far as my non-mathematical self can understand .(too bad can only accept one .. )
I thought I would post The result ( which is not final - but works ) , so to show what your help produced : 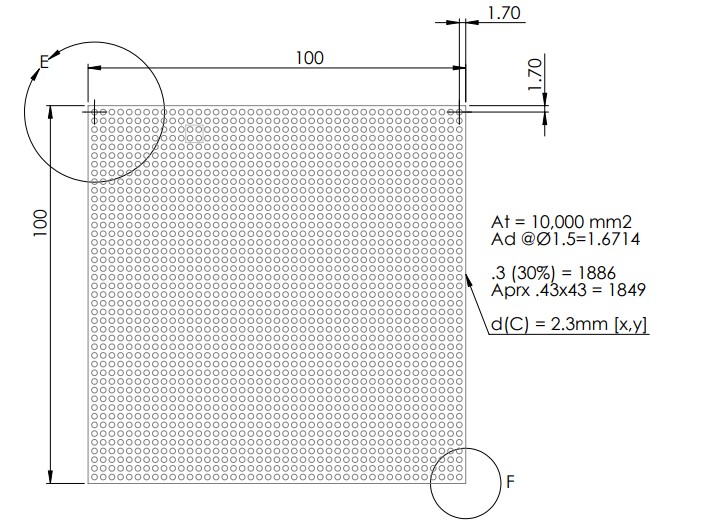 I hope I have understood what is giving you difficulty.

An equilateral triangular grid will allow denser dot placement and a different set of formulas. Here the $(m,n)$-th dot is centered at $((m+n/2)H, n (\sqrt 3 / 2)H)$, with $C= \pi R^2/ (H^2 \sqrt 3 / 2)$. The fundamental region is an equilateral triangle, with side length $H$. This is what you get if you put a dot at the center of each hexagon in a honeycomb grid. The dots don't overlap condition is $2R<H$. Describing the $(m,n)$ for which the dots land in your area $a$ is more intricate, so I'll skip that issue.

In general, the coverage $C$ is the ratio of the area of a dot to the area of the fundamental region of the pattern of dots. In the edited version of the problem, both scenarios are covered by the equation $\pi R^2 / (V\times H) = C$ but in scenario 1 the unknowns are $H$ and $V$ and in scenario 2, $R$ is the unknown.

For your first scenario: Each disk covers an area of $\pi r^2$, so covers $\frac {\pi r^2}a$ of your area. Divide this into your desired coverage to find the number of disks to use. The maximum number of disks you can put in one horizontal line is $\frac X{2r}$ because they will touch otherwise. Similarly the maximum number you can put vertically is $\frac Y{2r}$ Choose a rectanglar arrangement that gives the right number of disks. If there are $n$ disks horizontally and you want the outer margins to be half the spacing between disks, you have $nDH$ in empty space and $2rn$ in diameters of the disks, so $nDH+2rn=X, DH=\frac {X-2rn}n$ and similarly in the other direction.

For your second scenario: You have $n$ disks in a horizontal row where $n=\frac X{dx}-1$ because you have spaces outside the row of disks. Similarly you have $m$ vertical, so a total of $nm$ disks. The total area is then $nm\pi r^2$. Choose $r$ to be the proper fraction of the total area.

Not the answer you're looking for? Browse other questions tagged geometry circles area uniform-distribution or ask your own question.

2
finding the radius of a circle that intersects a sphere
4
Distance between 2 circles with same radius to overlap a desired percentage?
1
Diameter of nth circle between two circles problem
0
Given the y-values of points sampled at a constant angle on a circle with unknown center and radius, find corresponding x-coordinates