He says (direct quote): "In higher mathematics the absolute value of a number, $|x|$, is equal to positive and negative $x$, if $x$ is a positive number."

The geometrical definition for absolute value of x is 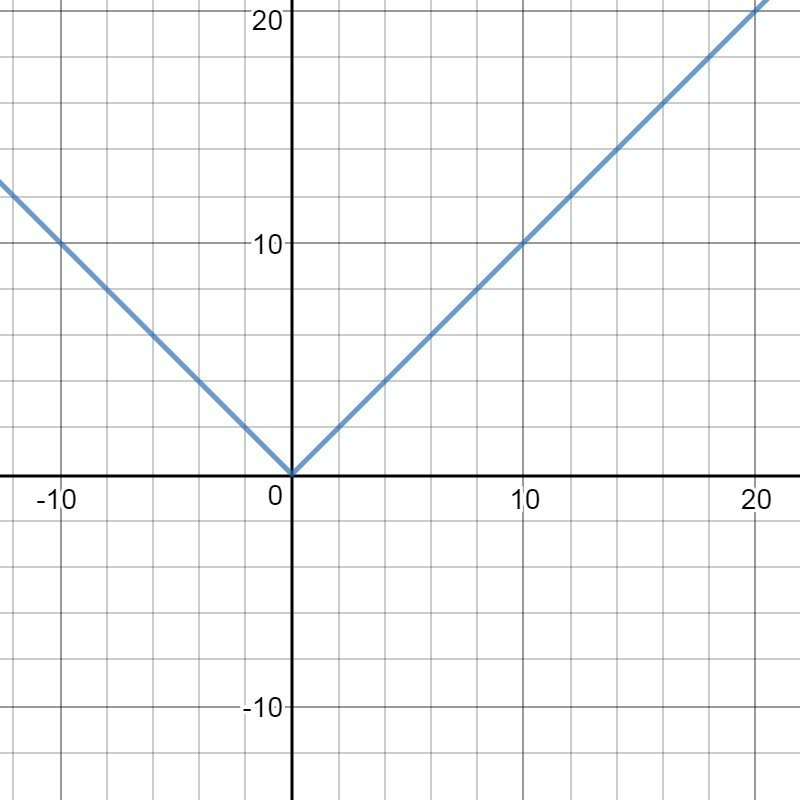 Notice that they will always make the value of y non-negative.

I think you are right, and your teacher - though I would assume he knows the definition - was too sloppy when he introduced the absolute value.

And, to round things up, as pointed out above in the comments, if you want to solve an equation involving an absolute value, you typically get two solutions. Let us say you are looking for all $x$ that satisfy the equation $$ |x| = 4. $$ Then there are two solutions, namely $x = \pm 4$, but note that the absolute value itself is NOT $\pm 4$. It is just $4$, in either case.

From this definition we obtain:

What your teacher might've meant by:

In higher mathematics, the absolute value of a number, |x|, is equal to positive and negative x if x is a positive number.

The last: "if x is a positive number" is incorrect. It must've been a result of misinterpretation. So, we usually end up using this in places like this:

Point your teacher to this discussion to show him the truth, the whole truth and nothing but the truth!

Hmm... I'm a little confused by some of the comments here.

My understanding of Absolute value is that it is the distance FROM 0.

Meaning, that unless x has a value of 0, the Absolute value of x is ALWAYS positive...

|x| = |x| Because Absolute value depicts only the distance from 0, not direction, and there is no way to graphically depict a number stripped of it's +/-. So the value of x is irrelevant: Absolute value of a number is the whole number value (+) of the variable.

DISTANCE from 0 is the depiction, not direction. So while saying that |(+/-)x| = x would be true, but trying to say -x = |x| = +x would be false. After all, in absolute value, ALL values are positive, because they are an ABSOLUTE value as a distance from 0, and as THAT is never depicted in direction, on a graph Absolute value would be depicted as more a vertical line, as long as to the left was (+) numbers, and to the right (-) numbers (or vise-versa)...

That would be a proper understanding of Absolute value, no?

I cannot comment, so I have to add this down here:

The last: "if x is a positive number" is incorrect. It must've been a result of misinterpretation. So, we usually end up using this in places like this:

Did I miss something? Absolute value HAS no sign, and in fact DENIES the application OF a sign...

Then, to make it even worse for me, the poster then adds under that 'As, x can be both 3,-3 simultaneously'... What? No, x MUST be a value of LESS than 3 if the second inequity IS intended to be a second statement, AND MUST be GREATER than -3 for the same reason. Thus in the second, x = (-3,3) meaning that the value of x is any number (whole or not) that is greater than -3, and less than 3.

Not the answer you're looking for? Browse other questions tagged algebra-precalculus proof-writing absolute-value or ask your own question.