Suppose you are inside a perfectly spherical mirror. You shoot one beam of light and it reflects on the walls of the mirror. Considering the intensity is constant will the beam of light hit you again?

I can shoot it from anywhere inside the sphere and I am a point.

One answer mentions that the beam will always come arbitrarily close. How to prove this?

I thought of this question while sleeping. But even after a day of thinking about this problem I couldn't solve it.

The only answer is brief and does not explain or prove what is says. Looking for detailed answers preferably using illustration and valid mathematical proofs for the statements they make. Would like to read about possible generalizations and variations of this question. Please don;t restrict yourself to this specific situation and do not hesitate to write long answers which give a wide overview of these type problems. Bounty-awarded answer is likely to be long, detailed and self-sufficient mathematically in terms of proving the facts it states.

By the laws of optics, the reflections will occur in the plane formed by the initial ray and the center of the sphere, and this is a planar problem.

Now consider the circle where you are standing and the successive intersection points of the reflected rays with it. 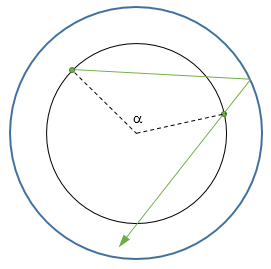 By symmetry, these points will be located at angles that follow an arithmetic progression, and the angular delta from the initial point is $n\alpha\bmod1=\{n\alpha\}$, where the angles are expressed in turns. Now it is clear that the ray will come back iff $\alpha$ is a rational number. If it is irrational it will never come back exactly but you can always find an $n>0$ such that $\{n\alpha\}<\epsilon$ for any $\epsilon$.

The situation is similar for the second intersection points with the ray, at angles $n\alpha+\beta$, where $\beta$ is independent of $\alpha$*. But then, it may turn out that $n\alpha+\beta$ is a integer by coincidence so that even with irrational $\alpha$ there can be an exact return (only one because $n'\alpha+\beta$ cannot be another integer).

Each time the light reflects it then traverses a chord, and all such chords will be the same length because of Snell's Law of reflection. If this length is $2r\sin(\theta /2)$ for $\theta=$ some rational multiple of $\pi$, the beam will trace out a convex or stellated polygon and hit you again. Else the beam misses you, but it fills in a ring whose outer boundary is on the sphere and whose inner boundary is inside the sphere (corresponding to how closely a chord of fixed length comes close to the center). This causes the beam to come arbitrarily close if given enough reflections.

Here's a partial answer, with diagrams and further elaborations expected to follow soon.

In general, the answer should depend on the radius of the sphere, your position inside the sphere, and the direction in which you fire the laser.

But by symmetry, I believe we can reduce the number of parameters in this problem to two:

For an explanation as to why you can completely determine the answer from just knowing $\rho$ and $\theta$, see the note [*] below.

As a result, though, this problem seems to be a 2D problem, fundamentally the same as firing a laser from within a 2D unit circle, as opposed to an arbitrarily-sized sphere.

(To see that the problem is 2D, consider two rays: the ray from the center of the circle to your current position, and the ray from your laser in the direction the light travels. Those two rays define a plane, and the bouncing light will always remain within that plane. The intersection of the plane with the sphere is, of course, a circle.)

The 2D problem has a nice solution explained here: Reflected rays /lines bouncing in a circle?

Here is an explanation of the diagram in that picture, to relate it to this problem:

[*] Here is a short explanation as to why two numbers $\rho$ and $\theta$ completely determine the problem. Of course, from the description of the problem, we need to know six numbers in order to decide whether the light will hit or miss you:

However, we can cut down on these numbers because of symmetry: the fact that observers in different positions and orientations will agree about whether the light will hit or miss you.

Now let's assume that you don't do any of that.

A good first step is to simplify the problem.

The first simplification I will make is this: there exists a plane containing the entirety of the path of your light beam; that plane also contains you and the center of the sphere.

So the simpler problem, which will have the same answer, is this: If you shine a beam of light at the wall of a mirrored circular enclosure from any point inside the enclosure, will the light hit you?

Well, let's again look at the simplest case remaining: your first angle of incidence is a rational multiple of 2π.

In this case, your beam will hit you. This is because its path loops, which it will not do otherwise.

So in the remaining cases, your initial angle of incidence is not a rational multiple of 2π, and so your path will not loop.

Let's start with a case in which your beam will certainly not hit you: your starting beam is perpendicular to the line containing you and the center of the circle.

The final cases are those in which your angle of incidence is not a rational multiple of 2π and your beam is not perpendicular to the line containing you and the center of your circle. Your beam's path will not loop.

Given a point in a circle and a length, if that length is greater than the length of the shortest chord that goes through that point and shorter than the diameter of the circle. then there are exactly two chords of that length that go through that point. So given the length that your beam segments take and your location in the circle, if your beam hits you, it hits you on the chord of that length that goes through you, but does not contain your initial beam segment, because your path will not be retraced. If there exist nonnegative m, n such that the angle between these two chords (the one that the line from the circle's center to you goes through) is equal to (m*2*the angle of incidence) minus 2πn, then your beam will include that chord and hit you; otherwise, it never will. This is because after m reflections, your beam's direction will have rotated by (m*2*the angle of incidence), which will be 2πn plus the difference in angle between your initial and final beam segments. This will select the final beam segment as the chord that will hit you. Otherwise, your beam will never traverse that chord.

I might have been flaky on a few details, but I hope this answers your question.

As has been mentioned, one should consider the plane formed by the source of the light, the first contact point, and the center of the sphere. The light beam will be confined to this plane, because the vector orthogonal to this plane will be tangent to the sphere at every point of contact. Now the problem is reduced to a similar argument, but considering a circle intead of a sphere.

Using Snell's Law (as Oscar Lanzi has pointed out), the length of each chord formed by the light beam will be the same. Now consider the angle 'a' around the circle formed by one of the chords. We will define the initial chord along which the beam was fired to be the 0'th chord, the next one to be the 1st chord, etc.

There are now two possibilities:

2) If 'a' is an irrational multiple of 2pi, let m[0] be the least positive integer such that:

We are guaranteed that such an m[0] exists, indeed m[0] will simply be the least positive integer such that m[0]*a > 2pi. Notice this implies that the angle between the m[0]'th chord and the 0'th chord is less than 'a'.

We can simply repeat this process by defining m[n+1] to be the least positive integer multiple of m[n] such that:

Define k[n] to be the angle between the m[n]'th chord and the 0'th chord, where k[0] is let to be 'a'. It is simple to see that the sequence k[n] is positive and decreasing. This means the sequence is convergent; in other words:

It could also be the case that one chooses wisely the initial firing point in a way that 'a' is an irrational multiple of 2pi, but the initial firing point is met anyway; consider, for instance, the case where one fires the beam of light from the intersection of chord 0 and chord m[0]. In this case, the beam of light will clearly pass through the firing point, but will only do so once, since a given point on a given chord is shared only with exactly one other chord (of the same length), and for 'a' being an irrational multiple of 2pi, we are guaranteed that no chord is ever repeated.

Sorry for the lack of fancy formatting, I'm new here and haven't had a chance to learn how to do that properly.

I realize this is a bit of a tome, so feel free to ask me about any uncertainties that might arise!

Not the answer you're looking for? Browse other questions tagged geometry physics proof-explanation or ask your own question.

5
Reflected rays /lines bouncing in a circle?
10
The case of Captain America's shield: a variation of Alhazen's Billard problem

1
Ring-shaped mirror chaos points
3
Periodical reflection conditions in a sphere.
2
Geometry brain teaser (Candle in the room with mirrored walls)
1
Calculating the acceleration of an object on the end of a lever.
2
Reflected rays bouncing in a regular polygon?
11
What would you see inside a spherical mirror?
0
Formula for the diameter of an emerging beam