Difference Between Double vs Single Integration in Polar Coordinates

I am familiar with integrating polar equations in single variable calculus to find area. For example, to find the area enclosed by one loop of the four-leaved rose $r= \cos(2\theta)$ I would preform the integral $\frac {1}{2}\int^{\pi/4}_{-\pi/4}\cos^{2}\left(2\theta \right) d\theta$. Now, I am learning to do double integrals on polar coordinates, but I am conceptually stuck. A problem given by my textbook is to evaluate $$\int^{2\pi}_{\pi}\int^{7}_{4}rdrd\theta$$ the answer to the question is found here.

The answer states that the region described looks like this: 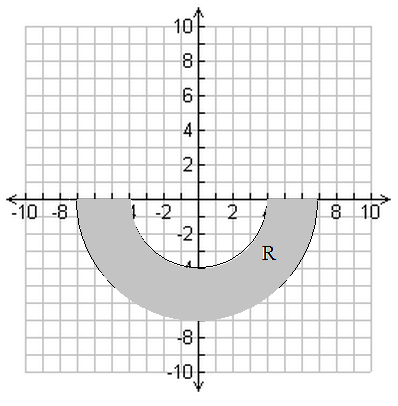 I am used to thinking that an integral essentially takes a function in one dimension makes its antiderivative, which is described in one higher dimension. So, when performing a double integral I expect a volume, although the answer is an area. Because it is an area, it is no different than a single integral, but this must be wrong. I am thinking that the inter integral creates a line from $r=4$ to $r=7$, and then the outer integral sweeps this line from $\pi$ to $2\pi$ to create an area. I do not understand what the purpose of this would be, when we could essentially use single variable calculus to find the areas of two half circles and subtract the smaller one.

What is the purpose and conceptual background of double integrals like the one above?

I will get to the purpose/conceptual background part of your question in a moment, but first let me say that you are correct in your interpretation of the integral $\int^{2\pi}_{\pi}\int^{7}_{4}r\, dr\, d\theta$. The inner integral sticks out a radial line from $r=4$ to $r=7$, and the outer integral sweeps this line from $\pi$ thru $2\pi$. The reason the integral corresponds to this geometric process perhaps can be understood by thinking of one method by which we can use calculus to compute areas.

You are probably familiar from 1D calculus that an integral like this $\int_a^b f(x)\, dx$ returns the area under the curve of the graph of $f$, and the usual way to interpret how it does, is that the integral is adding up a lot rectangles with very tiny widths (i.e. $f(x)$ represents the height of one of these rectangles, and $dx$ represents its tiny width). But instead of adding bunches of thin rectangles, we could alternatively compute the area under a curve by trying to fill it up with lots and lots of tiny squares or rectangles. Think of imposing a very, very fine grid on top of the graph of $f$. The grid line intersections form many tiny rectangles (not necessarily squares, because the grid lines don't need to be evenly spaced). Looking at an arbitrary one of these tiny rectangles, we may call $dx$ its width and $dy$ its height.

With this setup, we can express the area under the curve by the double integral $$ \iint_D dx\, dy $$ where $D$ represents the region whose area we want to measure.

Now, the way we would probably go about computing this double integral is to note that we can add up all these tiny rectangles by adding "column-by-column". If you imagine yourself manually placing the tiny rectangles within the region $D$, you could just stuff them all in at random (that's like writing the double integral expression above), or you could decide to do it more methodically by starting from the left-most side, and stacking rectangles one on top of the other till you hit the top of the curve, then moving a little to the right and repeating the process again, and so fill up the curve "column-by-column".

This process amounts to rewriting the double integral as an iterated integral like so: $$ \int_a^b \int_0 ^{f(x)} dy\, dx $$ which (would you know it!) turns into $$ \int_a^b f(x)\, dx $$ Something similar is happening in your polar example $\int^{2\pi}_{\pi}\int^{7}_{4}r\, dr\, d\theta$. We are filling up the region with tiny little shapes (whose tiny areas are individually given approximately by the quantity $r\,dr\,d\theta$) but filling "radial-by-radial" instead of "column-by-column".

So why are we doing this? Why add in an extra integral into the expression if it's just going to collapse into a single integral that we could have come up with in the first place? What advantage is there to thinking about filling up regions with a bunch of a little rectangles over two dimensions instead of just adding together lots of thin strips in one dimension?

Maybe nothing! Indeed, in many cases, I think it's quicker to just use the old-fashioned integration method to discern areas rather than introduce another integral into the matter. But I think there is at least one major reason why such an exercise and such a concept is useful:

It gives us a more general way to express the area of an arbitrary region in space.

You are probably aware that some shapes lend themselves easily to integration under Cartesian/Rectangular coordinate systems, while others (like washers and four-leaved clovers) are much simpler to integrate on using polar coordinates. And other regions (like those you might get if you give a child a marker and a piece of paper) don't lend themselves to any system we know of at all!

But the method of filling a region with lots of tiny shapes works for virtually any region we can think of, and thus gives us a way to talk about (and analyze) integration over a region without (yet) worrying about how to compute it (what coordinate system to use, how to "stack" the area elements, etc.). I mean, hey! maybe it'll turn out that crazy integral will just cancel itself out later on or something. It'd be quite annoying to have to do all the work of figuring out bounds and what not in order to write the integral over some pathological region just to find out that it cancels later!

But perhaps more importantly, there are theorems in Vector Calculus that describe relationships between various integrals regardless of the particular region of integration used. Thus, this concept is essential in expressing those theorems, because there is no way we could impose a coordinate system in advance on all possible regions. If we tried, we would either wind up needlessly complicating the statement of the theorems, or needlessly restricting their application to certain "nice" regions.

P.S. A quick way you might convince yourself that the double integral $\int^{2\pi}_{\pi}\int^{7}_{4}r\, dr\, d\theta$ is indeed returning an area and not a volume is to look at some imagined units for quantities in the integrand: $r$ has units of length, so does $dr$ (it's just really tiny), $d\theta$ is measured in radians, which, if you recall, are dimensionless. Thus the product of all three is $$ \mathrm{length} \times \mathrm{length} \times \mathrm{number} = \mathrm{length}^2 = \mathrm{area} $$ The integral signs $\int$ just mean "add" and so don't change the units.

Not the answer you're looking for? Browse other questions tagged multivariable-calculus polar-coordinates or ask your own question.