Influence of small constant term on roots of polynomial

Suppose that $|a_0|$ is very small (compared to the other coefficients' magnitude).

Why am I asking this?

I try to incorporate a not selfwritten custom root finder into my Matlab-program but unfortunately in some rare cases one of its loops doesn't converge if the input vector's constant coefficient is of the magnitude $\approx 10^{-18}$ and then the algorithm crashes. However it does converge if I set the constant term to zero but I worry whether I could get wrong results.

Based on the answer by @Fixed Point, I could find a successor (NAClab) of the Matlab root finder that I was using and it doesn't crash anymore. I then went on to quickly investigate the polynomials Fixed Point proposed. Here are the results:

Figure1: Up to degree 17 the root finder keeps the results on the real axis. From degree 18 onwards the calculated roots gain an imaginary part which grows linearly with the degree of the polynomial.

The ratio between the constant coefficient $a_0$ and the highest order coefficient $a_n$ is in the order of $10^{-16}$ when the roots begin to diverge from the real axis and grows with approximately one order of magnitude per increase of polynomial degree.

Figure2: Here the constant coefficient is set to zero, one can see that the roots that are close to each other get perturbed quite significantly.

The Matlab code to reproduce the results can be downloaded here.

Since Brent's algorithm is guaranteed to converge (it could be slow but it will converge), I am curious as to why you were having the problem that you said you were.

When developing the MIMO extension for ANP (animated nyquist diagram, a leisure project for educational purposes) I came to realize that the program would have to deal with high order polynomials even for small MIMO systems. I then noticed that Matlab's 'roots' would produce very inaccurate results when there were roots with high multiplicity present - even in trivial, obvious cases like $(x+1)^4=0$ (try roots(poly([-1,-1,-1,-1]))).

Even if my program should only be used for entertainment, that wasn't good enough. After finding Multroot (by Zeng) and unit-testing it with quite some success using randomized MIMO systems I found that besides some trivial to solve crashes it had a more severe flaw that had to do with a small constant term.

How/why was your application crashing?

One such polynomial can be defined in Matlab as follows (it's the one that finally lead me to this SE question):

Use it as input to Multroot: multroot(p) Most likely it will end with an error saying that an output argument hasn't been assigned. (Beware that the algorithm uses randomized initial vectors and thus succeeds with a small chance)

Was this MATLAB's fzero which was crashing?

As explained I didn't use 'fzero' and unfortunately it can't help me here, as it says in the documentation that it needs a change of sign to detect a zero - which isn't the case for all roots of a general polynomial.

As you can see that some of the roots stay the same or don't change much. But the majority of the roots "changed significantly" and became complex instead of purely real. So the answer to your question is, don't set the constant term to be zero. It won't work in general and can give you wacky answers.

If these coefficients are too large for you, then just divide the polynomial $p_2(x)$ by $20!$ and you get the coefficients

James Wilkinson is one of the most respected numerical analysts of the 20th century and his specialty was coming up with counter examples. He demonstrated that the problem of finding the roots of an arbitrary polynomial using its coefficients is an ill-conditioned problem in general.

Remember, this is despite the fact that the coefficients were integers (albeit very large integers). The roots were all real integers and well-separated and look what happened by a tiny perturbation. This polynomial is the one on which my answer is based.

Wilkinson presented another polynomial. Define $$q(x)=(x-2^{-1})(x-2^{-2})(x-2^{-3})...(x-2^{-19})(x-2^{-20}).$$ He showed that this polynomial $q(x)$ is rather insensitive to relatively large changes in the coefficients. Therefore in general, one cannot say anything either way. Check out this page for some more detail and I also urge you to read his published works (like the references at the bottom of the wikipedia page). They may be a bit hard to find but they are totally worth it.

Just out of curiosity - how did you calculate the new roots (for p3) in the third table? Is it an analytical result?

the answer is that no, this is not an analytical result. Plain floating point arithmetic was used to numerically estimate the roots of $p_3(x)$.

I want to point out here that lots of new or improved methods were presented in the past century. We know quite a bit about polynomials and their roots. But there is (still) no single numerical method which will work for all polynomials in an optimal fashion. You can always come up with counterexamples where a well-liked method will be "slow" or sub-optimal for finding the roots of a polynomial. However, there are methods which are much better than others.

One of the most popular is Brent's method which is a hybrid method. Brent actually wrote a book, "Algorithms for Minimization without Derivatives" but the book is now out of print. So they scanned a copy and made it available to public here. In this books, you want chapter 4, "An Algorithm with Guaranteed Convergence for Finding a Zero of a Function" which describes his method. His method has also been peer-reviewed published.

Furthermore, one of the cofounders of MATLAB, Cleve Moler has a blog (useful in itself) and once he had a three-part post (one, two, and three) describing various algorithms and how MATLAB's fzero works. Part two is where he discusses Brent's method which is implemented in MATLAB's fzero. Since Brent's algorithm is guaranteed to converge (it could be slow but it will converge), I am curious as to why you were having the problem that you said you were. How/why was your application crashing? Was this something you yourself wrote? But then I would advise you against this. There are plenty of canned routines and there shouldn't be a need to reinvent the wheel. Was this MATLAB's fzero which was crashing? In which case I would be very interested in knowing those polynomials. Perhaps you can post a few examples here? Lastly, there is this fun book, one of my all-time favorites and talks quite a bit about zeros of polynomials and how to find them. 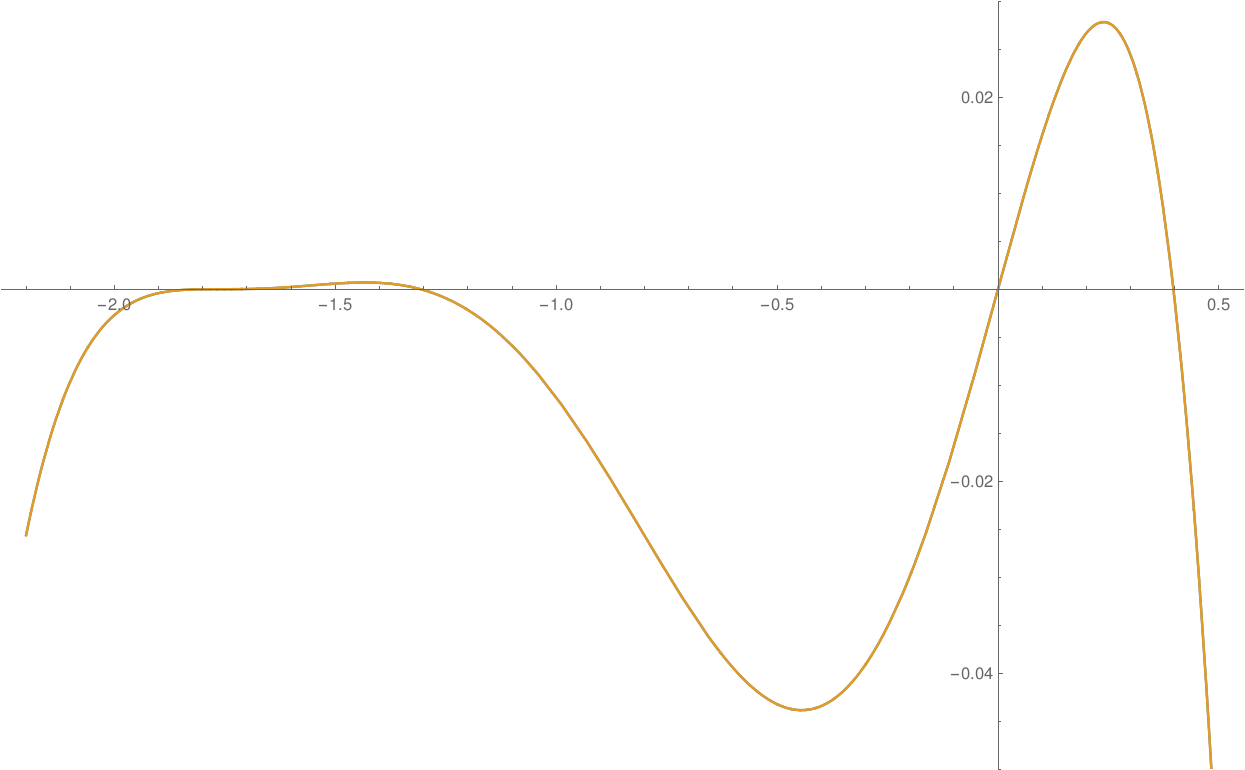 This picture above plots both $p(x)$ and $q(x)$. Look at the axis limits and the scales. I can see the three simple real distinct roots easily enough (the three right-most roots). On the left, the graph is very flat near the $x$-axis but there is at least one root there for sure. It could be just one real root with multiplicity three or it could be three distinct real roots very close together or any other combination in between. My guess would be there aren't any complex roots. Notice how both polynomials are indistinguishable from each other. We just see a single curve. 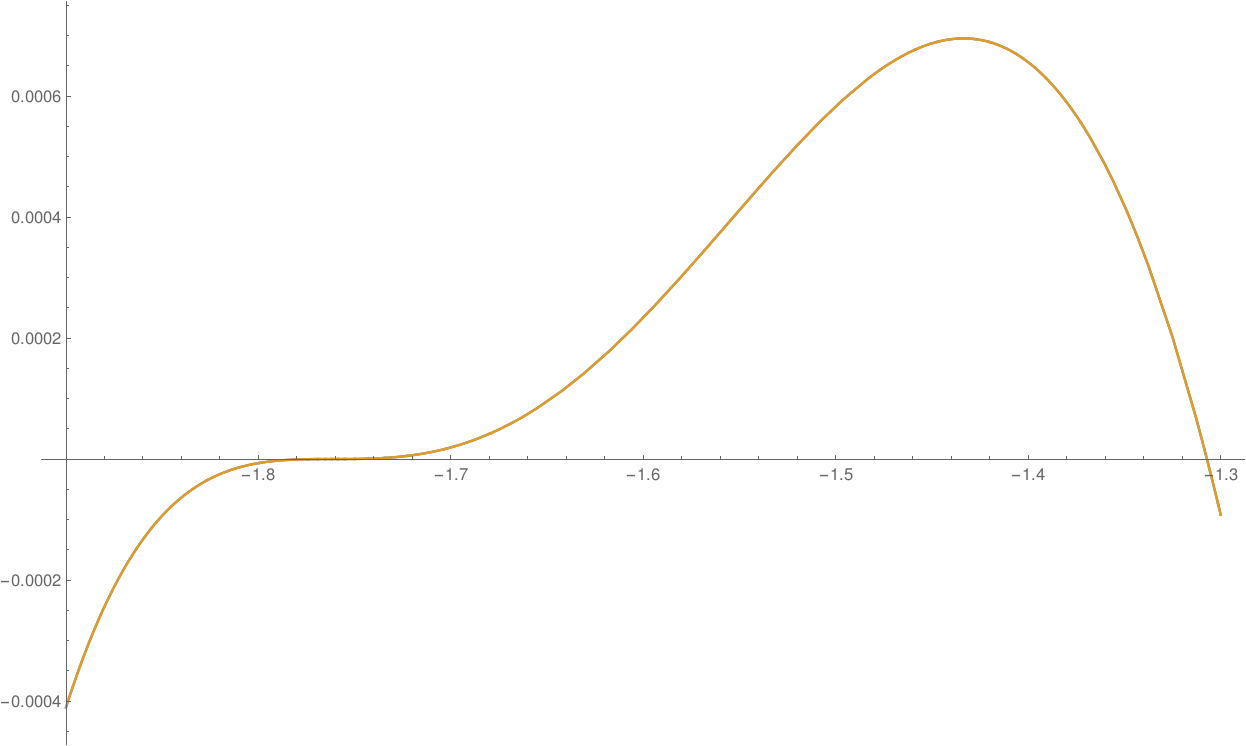 This second image, above, zooms in on that flat region. The third simple root (the one on the right in this plot) is even more obvious now. But we still can't tell what is happening with the other three roots on the left. The graph is still too flat. Note we still cannot distinguish between $p(x)$ and $q(x)$. This means that for this specific polynomial, the polynomial which prompted this question, setting the constant term to zero actually doesn't change the roots by much. We'll verify this now.

Starting with the exact coefficients and carrying about a hundred digits throughout the computations for precision and accuracy, I got the following roots.

The magnitude of the entire difference vector of the roots is $$||\text{Roots}(p(x))-\text{Roots}(q(x))||_2=9.995367\times10^{-7}$$ and indeed the roots changed very little. This is all relative because another perspective is that a change of the order $10^{-17}$ to the coefficient vector caused the magnitude of the roots vector to change by almost $10^{-6}$ which is eleven orders of magnitude. This is gigantic from another point of view. The vector function which maps the coefficients of a polynomial to its roots is indeed continuous. But being continuous doesn't restrict the gradient in anyway. It can be large or small. And in this case, the gradient of this vector function just happens to be very large at this particular point in its domain.

EDIT: On the other hand: given any simple closed contour $\Gamma$ such that no root is on $\Gamma$, let $\eta = \inf_{z \in \Gamma} |p(z)|$. Then any change to $a_0$ by less than $\eta$ in absolute value will leave constant the number of roots inside $\Gamma$, counted by multiplicity.

The general dictum is that the roots of the polynomial vary continuously with the coefficients, but not analytically.

Typical of what makes the "trajectories" of roots follow curves that are not analytic is what happens to a double root as it reaches the origin. That is consider $x^2 = \varepsilon$, so that small positive values of $\varepsilon$ give you a pair of distinct (positive/negative) real roots which become a double root at $\varepsilon = 0$. If $\varepsilon$ become small negative, the two roots which coalesced at zero fly off as a conjugate pair, i.e. going along a trajectory at right angles to the trajectory that brought the pair together as a double root.

Not the answer you're looking for? Browse other questions tagged calculus polynomials continuity numerical-methods roots or ask your own question.