Construct a perpendicular to a given line from a given (external) point, using a compass only once

Given a line $AB$ and a point $C$ not on $AB$ it is easy enough to construct a perpendicular line to $AB$ passing through $C$ using two circles as demonstrated in the following picture. 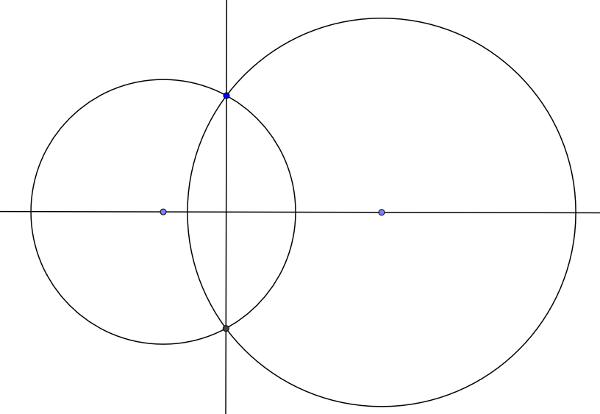 Here we pick two arbitrary points $E$ and $F$ on $AB$ and draw circles with centres $E$ and $F$ and radii $EC$ and $FC$. Then we take the two points of intersection of these circles (one of which is $C$) and draw a line between them. This gives a perpendicular line to $AB$ passing through $C$.

A similar proof is given in Euclid's Elements which uses the same idea and constructs two circles.

I am interested to know if we can construct a perpendicular from a given point to given line using the compass just a single time.

Yes we can! By exploiting the properties of orthocentric systems. 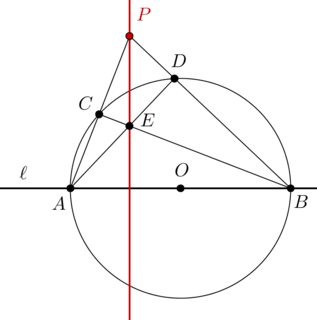 Not the answer you're looking for? Browse other questions tagged euclidean-geometry geometric-construction or ask your own question.

7
Constructing a circle through a given point, tangent to a given line, and tangent to a given circle
0
Construct circle tangent to two lines
21
How can I construct a square using a compass and straight edge in only 8 moves?
2
Construct a circle with straight edge and compass with some given conditions.
8
Construct 60° angle through point, other line in only four compass-and-straightedge steps
2
Construct a tangent line through a given point
1
Intersection of a circle and a line with only compasses
4
Geometric proof of equivalence between two constructs of ellipse
2
How can an angle bisector be constructed using just a pair of perpendicular straightedges (no compass)