I bet you know this game, Euclidea - if not I recommend it... although I'm stuck on level 2.8 which is different on iOS than other platforms for which there are already walk throughs available. 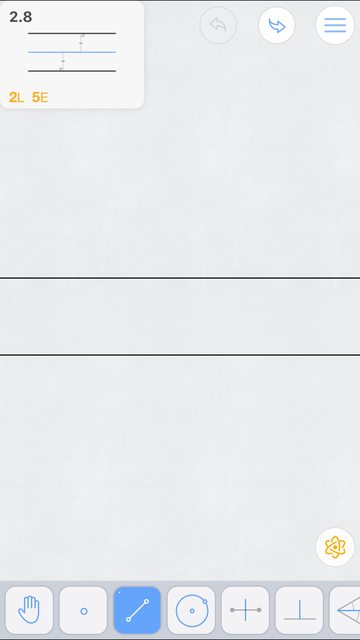 I need to build using compass and ruler an equdistant line between two parallel lines (the equidistant will be parallel to those two). I did it, but there's an additional challenge to do it with 5 moves in this order- Two circles and 3 lines. Obviously, it's possible to construct a perpendicular to the two parallel lines and then a perpendicular bisector for that one, but 5 steps is pretty tricky. Is it even possible?! I'm breaking my head over this..

Goal Construct line ${m}$ (for 'middle') parallel to and equidistant from both given lines, i.e., separated by a distance $D$ from both $a$ and $b$.

Constraints Only an unmarked straightedge and a non-rusty collapsible compass (i.e., a compass that, while on paper, can have any radius but which cannot maintain said radius when not on paper) can be used. Use only from the construction steps below a number of steps that together require just five elementary steps; the fifth step must construct the goal line itself.

Hints from Euclidea (including Twitter support) A known 5E solution employs five elementary steps in the order: circle, circle, line, line, line. The first circle is twice the radius of the second one. Homothety is used in the known solution.

SOLUTION Please refer to the figure below. Apologies for not having labels on this figure. 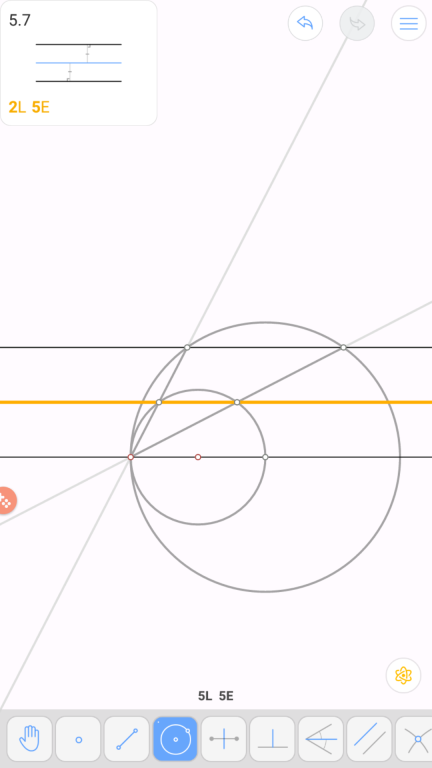 PROOF OF THE SOLUTION

I contacted their support and they came back very promptly with following hint: "The 5E solution in level 2.8 uses homothety. The radius of the second circle is twice the radius of the first one."

After googling and some 10 minutes I managed to solve it :) Let me know if you want me to post the solution here.

PatrikPatrik
1
$\endgroup$
Add a comment  |
Highly active question. Earn 10 reputation (not counting the association bonus) in order to answer this question. The reputation requirement helps protect this question from spam and non-answer activity.

3
Construct a midpoint of two parallel lines with only straightedge

8
Construct 60° angle through point, other line in only four compass-and-straightedge steps
3
Construct an equilateral triangle with area equal to a given triangle
7
Five-line inscription: Equilateral triangle, one of whose points is given, in circle with unknown center
0
construction with compass and ruler
2
Three-step construction: Euclid's fourth proportional
15
Constructing the incenter of a triangle in only six steps
8
Inscribing rhombus in a triangle's angle in only eight compass-and-straightedge steps
2
Construction of a rhombus with given conditions
1
Is it possible to construct the angle bisector of two lines with only a right-angled ruler?