Through a point outside a triangle, use straightedge and compass to construct a line that divides the triangle into 2 equal areas. (This is my friend's challenge, It was so hard, I don't know where to start, please help me) 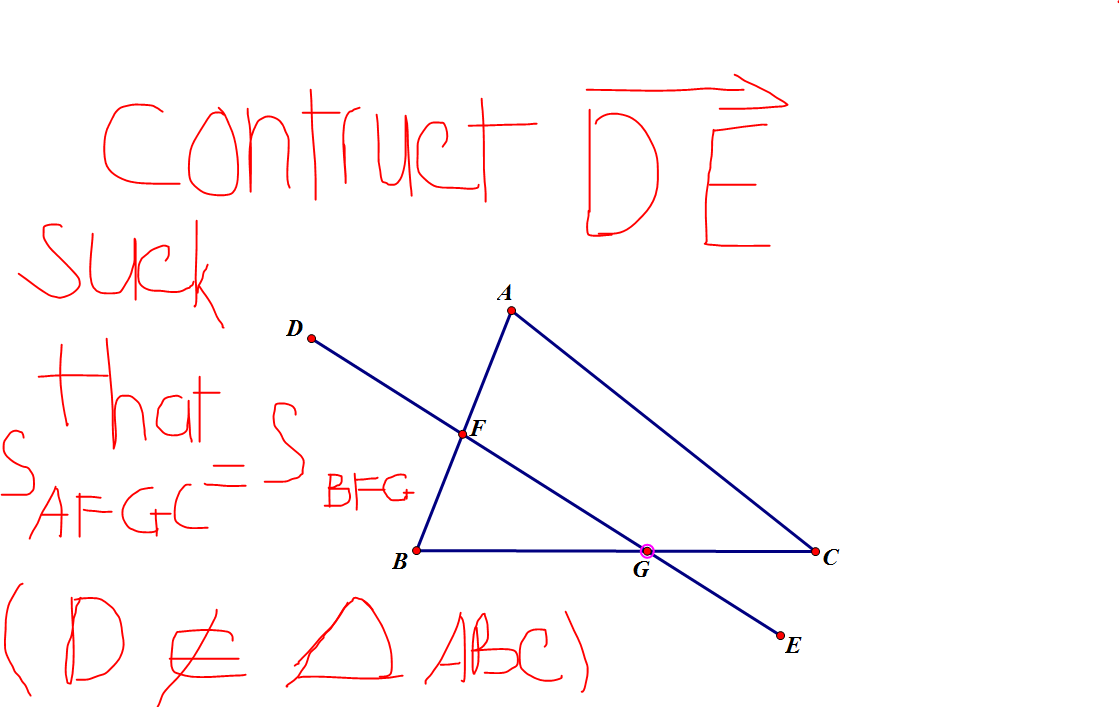 D is an arbitrary given point outside ABC

OK, here is a geometric construction. It is quite lengthy, so I will omit many details. Also, there is one assumption: I assume that the correct line will indeed intersect segments $BA$ and $BC$, just like it does on the diagram in the question. This may not be the case in general, but in general the line will still intersect at least two of the three sides of the triangle, and we can still apply this solution after reassigning letters $A$, $B$ and $C$ appropriately.

Here is how we can think of the problem: build a line that goes through $D$, meets $BA$ and $BC$ at $F$ and $G$ respectively, and such that the product $|BF| \cdot |BG|$ equals to some fixed value $s$. By using an appropriate $s$ we can make the area of $\triangle BFG$ equal to any perscribed value.

So, how do we control the value of $|BF| \cdot |BG|$? With compass and ruler, it's hard to control products. In my experience, it's easier to control quotients, probably because it is easier to imagine what two segments with a given quotient look like. I know this sounds vague, but I can't help it.

Still, there is one cool place in "constructive" geometry where products appear. They appear in the definition of inversions. Inversions can be really helpful, plus it is possible to implement inversions with ruler and compass. Maybe we can use an inversion here too?

But hold on, $B$, $F$ and $G$ are not on the same line, and points appearing in the definition of an inversion should be on the same line! What to do? Well, if you want only a hint, then I have already said enough. Now that you really know that there is a solution that involves an inversion, you can try to finish it yourself. If you want the whole solution -- read on.

I took my time really doing all the construction in CaR, here is the resulting diagram (with most of the details hidden): 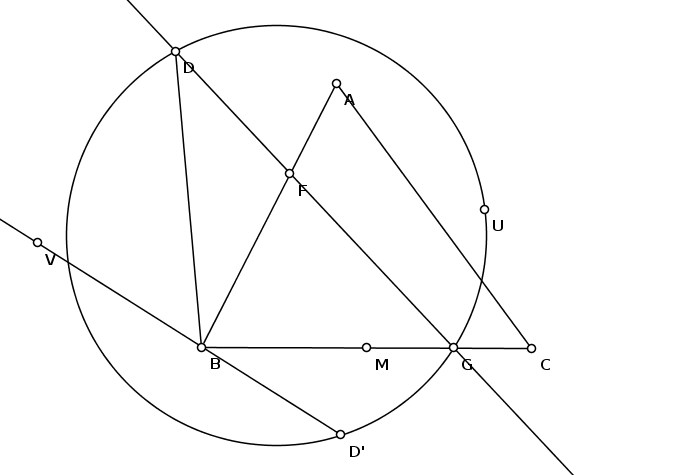 We will now prove that line $DG$ that we have built really splits $\triangle ABC$ into a triangle and a quadrilateral with equal areas. The order of the proof will be more or less opposite to the order of the construction above.

So, as it turns out we can prove the construction without using inversions at all.

Rhombus since 1 part and the 2nd part are equal. And this is a much simple way of calculating than your complicated ways. This simple way will help smaller kids like in 3rd and 2nd grades understand the concept better. For 4th and above, these ways are great. But, I prefer you make simpler calculations than this.

And don't forget this answer for 3rd and 2nd graders!

Rhombus since 1 part and the 2nd part are equal!

1
divide triangle into ratio 1:2
1
Dividing a Triangle into Two Parts of Equal Area with Constraints
1
Triangle divided into equal halves
5
Archimedes trisection of equilateral triangle?
3
Construct an equilateral triangle with area equal to a given triangle
1
Geometrical problem to show equal areas
2
How to find a point that divides a triangle into to pieces with equal area
0
Geometry Problem: In Triangle ABC, draw a perpendicular on line BC such that Area of ABXY is equal to Area of XYC