Ask Question
Asked 4 years, 11 months ago
Modified 1 year, 8 months ago
Viewed 793 times
7
$\begingroup$
This question already has an answer here:
The union of growing circles is not homeomorphic to wedge sum of circles (1 answer)
Closed 1 year ago.

This is problem 1.2.20 from Hatcher's algebraic topology.

I am able to complete the first part. But I have trouble proving they are homotopy equivalent but not homeomorphic. Can someone please give some hints? Thanks. 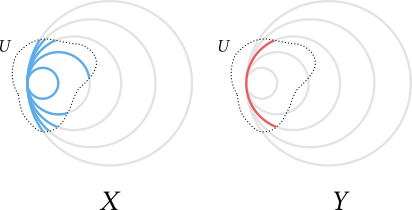 Here's the visual intuition. The problem for homeomorphism is that the wedge sum makes all the circle-copies $S^1$ independent of one another. You can make an open set in $Y$ by choosing one arc (such as the red curve, above) independently from each of the circles; the union of arcs is an open set.

In contrast, the circles of $X$ are clustered together at the origin. Any open neighborhood of the origin will intersect all of the circles, and the resulting arc lengths (blue curves) are not independent of each other. Instead, we know that the neighborhood contains an open ball around the origin, and so each curve must be at least as long as the ball's radius.

This is the fundamental difference between the two topologies: In both $X$ and $Y$, the neighborhoods of the origin include families of arcs, one per circle. In $Y$, the arcs from different circles may have arbitrary lengths. In $X$, the arcs always have some lower limit $r$.

You can use this intuition to prove that $X$ is first countable (it's a subspace of a metric space $\mathbb{R}^2$) but $Y$ is not; hence they're not homeomorphic. ($Y$ is not first countable: for any collection $B_1, B_2, \ldots,$ of neighborhoods of the origin, you can find for each $B_k$ a "red arc" $A_k$ in the $k$th circle that is sufficiently small that it does not contain $B_k$; from the combination of these arcs, you can obtain a neighborhood $ \bigvee A_k$ of the origin that (by diagonal argument) contains none of the $B_k$; hence the collection $B_1,B_2,\ldots$ isn't a neighborhood basis. It can be useful to think about why this construction doesn't transfer over to $X$.)

The intuition that $X$ and $Y$ are homotopy equivalent: note that you can construct either space following the same construction technique: start with an infinite disjoint union of circles $\coprod_\infty S^1$, select one point from each circle, and glue the selected points together. In other words, $X$ and $Y$ are cell complexes made of the same parts and constructed in the same way.

Here's one way to construct a homotopy equivalence explicitly. There's a bijective map $f:Y\rightarrow X$ that sends circles to circles in the obvious way, mapping the origin onto the origin. Roughly speaking, it is continuous because $Y$ includes all the same open sets as $X$ (plus some more).

Next, in the space $X$, consider a small closed ball around the origin, say of radius $r=1/4$. There is a continuous map $\alpha:X\rightarrow X$ which shrinks all points in the ball to the origin, pulling the rest of each circle closed. This map is continuous and moreover homotopic to the identity (you can gradually shrink the ball to a point.) 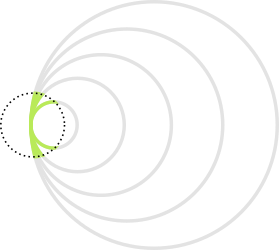 There is a bijective function $\tilde{g}:X\rightarrow Y$ which sends circles to circles, mapping the origin onto the origin. It is not continuous, because there's no analogue in $X$ to the open neighborhoods made of arbitrary-sized arcs through the origin in $Y$. In contrast, the composition $g \equiv \tilde g\circ \alpha$ repairs this problem— it is continuous. Indeed, then the inverse image of every neighborhood of the origin in $Y$ contains the previously shrunk-to-zero ball of radius 1/4.

The pair $f$ and $g$ comprise the homotopic equivalence. The composition $f\circ g:X\rightarrow X$ is just the map $\alpha$ again, which shrinks the $1/4$-radius ball to zero. The composition $g\circ f:Y\rightarrow Y$ performs an analogue of that quotienting operation on $\bigvee_\infty S^1$, sending various arcs of the origin, one from each circle, to the base point. It is similarly homotopic to the identity.