Let $P$ be a mathematical statement or a mathematical problem. I am looking for a couple of nice examples for $P$ that satisfy the following criteria:

Any ideas? A short explanation of the problem from the different angels is welcome and appreciated.

Now, the very statement of this theorem uses the concept of primality and a limit of a real function, so any proof must, at the very least, use some elementary number theory and some basic real analysis. It turns out that it is indeed possible to prove the prime number theorem with only these basic tools (Selberg/Erdős discovered such a proof) but this proof is (relatively) quite difficult.

It was discovered several decades after the first proofs were found by Hadamard and de la Vallée-Poussin (independently) in 1896. Both of their proofs used complex analysis (in fact, they developed quite a lot of the theory of complex analysis largely with this purpose in mind I recall). So the Prime number theorem is an example of a theorem that can be stated with only elementary number theory and real analysis, and can be proved with much effort with only these theories, but is much more easily established by complex analytic methods.

Matrix multiplication is associative: you could prove this by a computation, but it's obvious once you realize a matrix gives a function $\mathbb{R}^n \to \mathbb{R}^n$. This one is sort of cheating, because it's not clear why you'd want to multiply matrices unless you understood this property already.

Subgroups of free groups are free: this can be shown group-theoretically but is not obvious. Topologically, this says covers of graphs are graphs, which is obvious.

Hilbert's Theorem 90 can be proved directly in a couple paragraphs, using linear independence of characters, but spotting the theory of etale cohomology it just says that there are no non-trivial line bundles on a point.

I propose something of a more elementary nature.

As it is stated this is a statement in classical plane geometry which is not that easy to prove. If you are giving a lecture you could draw a picture at the blackboard and invite the public to think a bit about it: I'm quite confident that nobody will find the solution in one minute or so.

Now if you change the point of view, moving into analytical geometry, you'll see that the problem is solved by a completely straightforward computation: indeed, vectorizing the picture (the following is taken from Wikipedia) 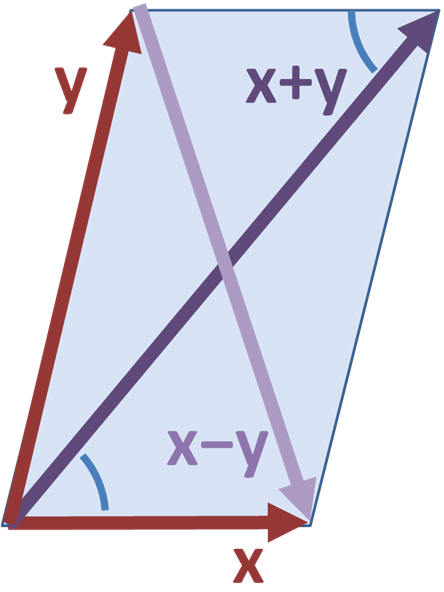 you see that you only need to expand the squares $(x+y)\cdot(x+y)$ and $(x-y)\cdot(x-y)$, which is a familiar task to everybody who has had a course in elementary algebra.

The following theorem is quite easy to prove using model theoretic tools, but I heard it is very difficult with plain analysis tools:

Let $f\colon\mathbb{C^n\to C^n}$ be a polynomial function. If $f$ is injective then $f$ is a bijection.

There is a nice class of theorems in forcing whose proof is unclear (if even possible) when approaching to forcing by posets, whereas the proof is immediate when working with Boolean algebras (the completion of the separative quotient of the poset).

This is a whole class of examples of the phenomenon you ask for, where a problem that is difficult in one theory is easy in another.

For example, given a field extension E/F, could you fathom how to classify all the intermediate fields? If you are a pessimist, it seems like it even may be too hard a question to hope to be able to answer. With Galois theory however, this problem is converted to classifying the subgroups of a given group, which brings us back to much more familiar territory.

Goodstein's theorem, which makes an easily-understood assertion about easily-understood operations on integers, is not just 'difficult' to prove, but unprovable in Peano arithmetic; however, if we're allowed to use transfinite ordinals, the proof is really quite short.

As for "it is ok if the problem is not pure math but must have a clear link to maths", I think you're going to have trouble, because of things like the objections raised in Feynman's challenge.

There are uncountably many equations (e.g. $x^2 = -4$), and for that matter uncountably many problems which are unsolvable when restricted to real analysis -- but that have complex solutions. $$i = \sqrt{-1}\;\;\text{ to the rescue, so to speak}.$$

As an added side note:
Similarly, a crucial advancement in mathematics occurred way back in ancient Greece, when Euclid concluded that there is no way to compute the diagonal of a $1\times1$ square in terms of the ratio of two lengths, geometrically or otherwise. From this he was motivated to establish that there must exist numbers $x$ (e.g. $\sqrt{2}$) such that $x \notin \mathbb{Q}$. In this case, $$\mathbb{R} \text{ to the rescue!}\;$$

I think this might be an example. Proving the fundamental theorem of arithmetic using topological methods. However, the proof is not very difficult. Check http://en.wikipedia.org/wiki/Furstenberg%27s_proof_of_the_infinitude_of_primes

This might be an example too. Abraham Robinson and Allen Bernstein proved that every polynomially compact linear operator on a Hilbert space has an invariant subspace using non standard analysis.

I know that the areas concerned are not entirely different, but here's another example.

The theorem was proved by William Burnside in 1904 using character-theoretic methods (or the method of linear substitutions as Burnside referred to it). However, it was not until 1970 - over 65 years after Burnside's original proof - that David Goldschmidt - using the ideas of John Thompson - produced a group-theoretic proof in the case that $p,q$ were odd primes. In 1973, Hiroshi Matsuyama completed the proof of Burnside's Theorem by proving that a group of order $2^{a}p^{b}$ was soluble. A year earlier, Helmut Bender had also given a full proof of the theorem in his paper A group theoretic proof of Burnside's $p^{a}q^{b}$-theorem.

The character-theoretic proof is a few pages long, whilst the group theoretic one takes up 15-20 pages.

Brouwer fixed point theorem has many proofs. The one via Sperner's lemma is elementary and tedious (sorry sperners lemma), but as you develop more tools in topology the proofs become shorter and shorter. It's not that any particular viewpoint makes BFPT particularly hard, but in the course of developing topological tools you make thinking about the problem easier and easier.

If you need this for a presentation, then going into all this stuff will be way beyond your time limit probably. But at least Brouwer FPT has interesting explanations and applications.

Another interesting problem is proving that $e$ is irrational. There's Fourier's proof (from the BOOK) using Taylor series, a small variation on this approach, I've seen one using Niven polynomials, a geometric one involving an intersection of nested sets in the real line, and Euler's proof via continued fractions (which he somehow got while doing differential equations).

The interesting thing about each of these is that they all have something extra unique to them. Taylor series makes this very short and sweet. Niven polynomials are actually powerful enough to prove that any rational power of $e$ is irrational, and I believe $\pi$ as well. The geometric one allows one to derive an "irrationality measure." And continued fractions are always cool, no exceptions. All are elementary (i.e. assumes no more than differentiation, integration, and Taylor series) except for Euler's continued fraction stuff, I couldn't get at this original work to figure out what he did.

Not the answer you're looking for? Browse other questions tagged soft-question math-history big-list education or ask your own question.

334
A challenge by R. P. Feynman: give counter-intuitive theorems that can be translated into everyday language

93
What are Your Favourite Maths Puzzles?
2
Looking for a simple problem for math demonstration
10
Independent undergraduate research -- what to do?
33
When is something "obvious"?
18
Interviews of famous modern mathematicians
2
What is the most appropriate book for teaching, not the content but skills of mathematics
0
Introductory book on Group Theory for physicists