I would like help identifying the rigorous classification of this 'surface' geometry based on my interpretation of 3D models.

I want to try and identify a geometric structure I thought up while doing some weird stuff with making things walk on the surface of a 3D model and trying to incorporate backface culling into the surface geometry itself. See, in computer graphics each side of a polygon or triangle are considered separate entities and so I specifically desired to capture this within the geometry I constructed. Below, I will describe the different properties I know of to see if anyone can identify it as anything previously studied.

Now comes the somewhat weird part. We can say that a half-triangle only has one side. If we look at it from a geodesic perspective and a physics perspective, from the side in space where the points are in clockwise order, there is nothing on that side. Literal emptiness. The geodesics will behave as if that triangle isn't there. However, from the other side, the half-triangle does exist and geodesics extending onto that triangle will behave as if it is there. Think of it like a one way window.

Now I did technically say a bit about the geodesics, but let me be more rigorous. When triangles facing the right direction form a surface like in a triangular mesh or this image geodesics behave like you would expect. In fact, two half-triangles with the same three points but facing in opposite directions form a regular triangle.

The unusual case is if we had a shape like in the T-surface within the below thing I found on google images. If all the protrusions are formed by normal triangles, then under my system the blue line is a geodesic/straight line. 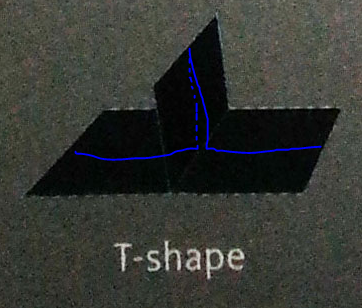 Whereas if the surface was formed by half-triangles and the unseen backsides did not have any half-triangles, then by extending the green lines according to the allowed rule set forth in Euclid's second postulate which states "lines may be extended infinitely in either direction" we get the following: 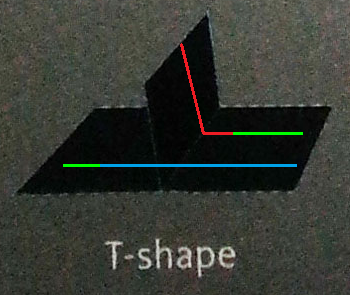 I hope the image makes sense. Basically, when there is no side from where the line is coming from, the line just ignores it and passes by it (hence the action of the blue line). Furthermore because there is no backside for the red line to wrap around onto, it just ends. These are just two examples.

Note, that this also means that by extending backwards along the blue line, the blue line can essentially grow a perpendicular segment that is part of the line. This essentially means that the lines in this system can split and branch wherever a lone half-triangle intersects a plane on the side that exists. I feel that this is in particular an important property of this geometric system.

Let's presume that this concept can be extended to 'surfaces' in general. Not just polygons. I dare not attempt it myself, but I'm sure the polygonal case is clear enough for people to get an idea of how that might extend. What sort of 'surface' geometry am I doing it and what is it classified under?

We can drop a dimension, since you can assume that locally the structure is the product of $\Bbb{R}$ and another geometric structure that I will describe.

This structure is a topological space together with a continuous action of the semigroup $\Bbb{R}_+$.

It is very similar to a switch in a train track structure. There are two semigroup actions of $\Bbb{R}_+=\{x\in\Bbb{R}$, s.t.\ $x\ge 0\}$, corresponding to moving forward and backwards. There can be no group action of $\Bbb{R}$, since that would imply time reversibility. 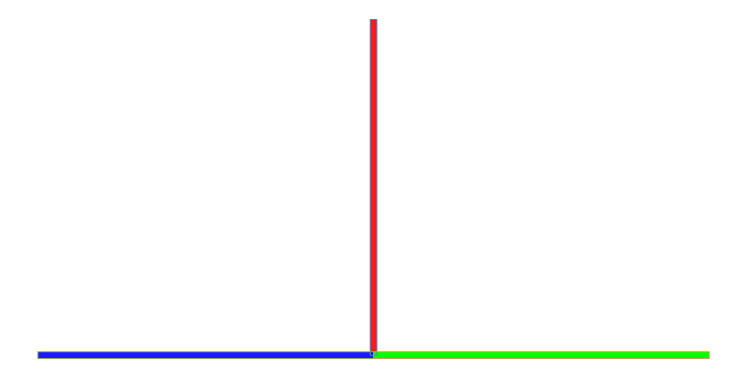 With this topology both actions are continuous.

The topology is not Hausdorff, in particular it comes not from a metric structure (but there is a pseudometric structure with the distance between the endpoints being zero) the point $(b,0)$ is closed, but the points $(r,0)$ and $(g,0)$ are not closed (the union of both points $\{(r,0),(g,0)\}$ is closed.

If you take the quotient space and collapse the three endpoints (identifying them as only one point), then the action is no longer well defined.

In general topological spaces with continuous actions of $\Bbb{R}$ which are also called flows, is very well studied, for example in the theory of differential equations. However, if you only have a semigroup action, or two actions that are not symmetric, there is very few literature.

If you now return to dimension two, you are dealing with oriented geodesics, I didn't find anything specifically referring to your particular problem, but Thurston has worked in related areas.

In the 2dim case you would have the semigroup $\Bbb{R}_+\times\Bbb{R}$ acting on three halfplanes (with two different actions). 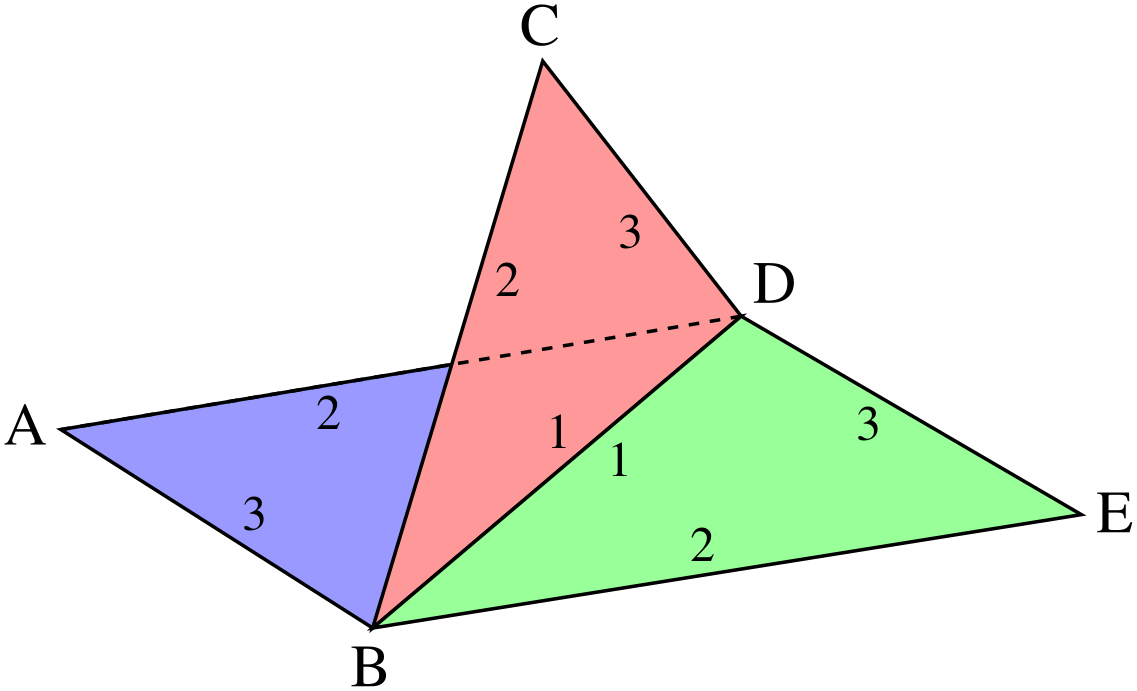 The "real" side of the triangle is the one where the edges are numbered in counterclockwise order.

If we consider the two-dimensional (and "one-sided") surface on those three "one-sided triangles", the geometry within each triangle is strictly Euclidean, but there are discontinuities at the edges of the 3D triangles. If we draw a directed graph of how a point on one triangle can pass to another triangle, by walking over an edge, we get:

The problem is that a 2D point in the $BDE$ (green) triangle traveling to the edge $1$ experiences a discontinuity at the edge. When it passes to the surface on the $ABD$ (blue) triangle, suddenly the entire halfspace (half-plane) behind it snaps to the $BDC$ (red) triangle!

If there were no such discontinuities, the geometry on the surface could be considered Euclidean.

A particular issue is that it is undefined which half-plane the 2D point observes, if it travels from the surface on the $BDE$ (green) triangle to the edge $1$, and then along the edge $1$: we cannot mathematically determine it based on the location of the point alone.

In computer programs, this problem is avoided by always having the point exist on the surface of exactly one triangle, and only changing to another triangle when the point passes over the edge. The discontinuous "snapping" happens only when the point goes outside the current triangle, onto a new one.

$\newcommand{\Reals}{\mathbf{R}}$This may not be an answer, but is too lengthy for a comment.

I read the question as

How are we to describe such a geometric structure using the language/concepts and machinery of topology?

This violates the fact that in topology, a composition of continuous maps is continuous.

Not the answer you're looking for? Browse other questions tagged geometry 3d surfaces computational-geometry paradoxes or ask your own question.

6
Need for triangle congruency axioms
3
Two Equilateral Triangles and the Golden Ratio: Simple Geomtric Proof
7
Triangle in perspective to a given triangle but similar to another
4
Algorithm to find the shortest path between 2 points on a 3D triangle strip
1
Walking on the surface of a triangular mesh
2
Identifying the Plane at Infinity in the World Necessitates Determining the Affine Geometry of the World?
0
For any surface bounded by a sphere is there always an upper bound of the set of all lengths of all shortest length geodesics between pairs of points?
0
Hyperbolic half plane and the fith postulate