Why does the area of two base vectors form a square and not a triangle? 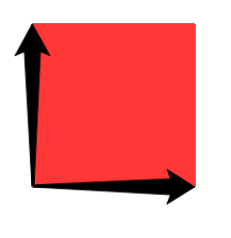 Please note that this is merely a graphic to illustrate my point and salient details of the vector's size and coordinate system have been omitted.

Why, however, is the enclosed area not this, as it seems more intuitive to me?: 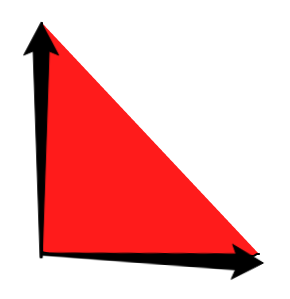 The vectors in both graphics are of the same magnitudes and only visually aren't due to my lack of artistic skills, but in this one I have half the enclosed area. This seems more intuitive to me because it's now a shape using the two length projections of $\hat i$ and $\hat j$ instead of using all the enclosed area. Is it convention? Or is there something else to it? Let me know if my question is unclear and I'll try to clarify, but I'm essentially asking why we establish that the enclosed area of the matrix I've stated above forms a square and not a triangle, when I imagine you would need $4$ lengths to create a square, and $2$ to create a triangle. What contradicts my logic is that by that logic the area of a triangle would be $base \ \dot \ \ height$, but I can't explain why beyond that point, as visually it would make sense to me.

The basis vectors tell you where in the space you can go. Let us say you want to go one unit up and one unit to the right. In this situation, the shaded triangle area does not cover this point.

Another way to think of it is to take a vector and move it along the path of the other vector. Doing this and shading any point that is touched tells you where you can go (assuming you are limited to the length of the vectors). If you do this with your drawn vectors you will see it shades out a square.

Not the answer you're looking for? Browse other questions tagged vectors or ask your own question.

6
How does law of cosines work with vectors?
0
Finding the position vector of the midpoint of a line formed by the difference of two vectors
0
Draw the standard basis vectors $\hat\imath$, $\hat\jmath$, $\hat{k}$ co-directional to the two parts of the water main given
2
Simplistic question about position vectors
4
Area of the triangle formed by three vector lines
1
Compute area of triangle
0
Operations with Algebraic Vectors in R2
0
Can one prove that whether a triangle is a right-angled triangle just by looking at the position vectors of its vertices