Have incompletable Sudokus ever been studied?

Weird question, I know, but this is in relation to an extension of Sudoku into a set of sequential, partisan games which always results in incompletable Sudoku. (i.e. the requirements of strategic play lead to choices that create "dead cells" in which no integer may be placed without violating the orthogonal constraints. Typical games on 9x9 seems to result in Sudoku with about a dozen dead cells.)

If this has been looked at, I'd appreciate any links (with the understanding that it probably hasn't, but that it never hurts to ask.)

Part of the impetus for the question is that we're trying to get a handle on the size of the gametrees. Enumeration of Sudoku doesn't really help because it doesn't take into account sequence or the number of incompletable grids of a given order.

You can read the concise rules for the "multiplayer partisan Sudoku" here.

Here are some screenshots to illustrate how "broken" Sudoku can be formed: 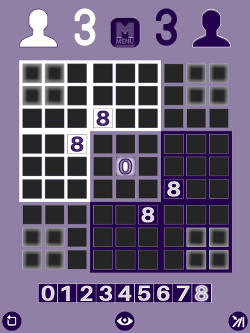 In this example, 5 placements result in an incompletable Sudoku--all the positions that can take an 8 are highlighted, but an 8 may no longer be legally placed in the center Region. 5 placements is the minimum I've be able to utilize to produce this effect on a 9x9, and there are a number of different 5 integer combinations that can produce it.

"Dead cells" in a typical game would look more like this: 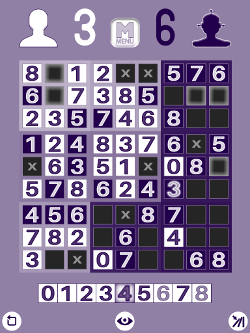 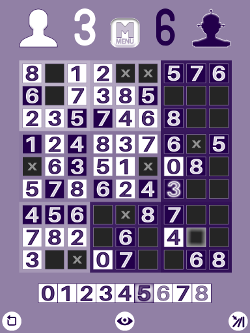 In this example you will note that neither a 5 nor a 4 can be legally placed in the bottom-center Region. For a fuller example of how partisan, strategic placement works in conjunction with Sudoku, see "Power of M"

There has been a bit of work on this problem, I think this 2012 result is the most well known. It basically says that if there are less than 17 filled entries, then a Sudoku cannot be uniquely completed (there will be more than one way to complete it).

Not the answer you're looking for? Browse other questions tagged combinatorial-game-theory sudoku or ask your own question.

39
Sudokus as composition tables of finite groups
13
Create the most 'stressful' tennis game ever!
1
Necessary conditions for a Sudoku puzzle to have no repetitions
3
Arrange 81 two-digit numbers to form two sudokus?
1
Does this position in generalized domineering have temperature greater than two?
0
How many strategies do the players have?
0
How to determine the size of the complete game tree for basic [M]?