A quick disclaimer that I'm working on all of this for recreational reasons, so I might be missing a lot of the precise language. I haven't taken any complex analysis, yet. (really excited for it, however)

Also, real quickly, I'm not asking about how to represent a complex number in polar form i.e. representing $a+bi$ as $re^{i\theta}$. (I just don't want to get marked as a duplicate right off the bat and I couldn't find this question among all those.)

Consider $\mathbb C^2$. Does it make sense to talk about transforming a point, $(x,y)$ into a polar form $(\theta,r)$? To begin, I decided to consider the analog of the unit circle in this space (the set of all points one unit from the origin). For this I went with the usual distance function, $r=\sqrt{x^2+y^2}$.

Ok, lets think about the point on this unit "circle" that has a y-coordinate of 2. Applying the distance formula above, this means that $x=\pm\,i\sqrt{3}$. I'll take the positive value. Then by analogy to the familiar unit circle, assume that $y=\sin{\theta}=2$, which gives $\theta = \frac{\pi}{2}-i\, \mathrm{arccosh}\,2$. I've been able to convince myself that the real part of this angle makes sense as $\frac{\pi}{2}$ in this context:

Most fundamentally, sin is the ratio of the opposite side and hypotenuse of a right triangle. If we take the modulus of the side lengths, we get, in this case, $2, \sqrt{3}$, and $1$, but the right angle, is positioned at the angle of interest. (I hope that makes sense it's hard to explain without a picture.)

It's a little harder for me to get my hands on the imaginary part of the angle. I assume that it's related to some hyperbolic stuff that I just haven't learned yet. I know that there's a way to give a meaning to $\mathrm{arccosh}\,2$ as some sort of hyperbolic angle, but for me the intuition isn't there.

My question then, is: What does the complex part of the angle represent intuitively?

Also does any of what I've done really follow/make sense? I'm particularly concerned about the way I defined my metric--it is defined such that a point with coordinates who's moduli are arbitrarily large can still be one unit from the origin. Then again so it is with the so-called unit hyperbola if I understand properly.

And finally, how might we visualize this unit circle (hyper-sphere)?

EDIT: Thank you very much for the comments and answers. I thought I would change up my question so that I can either get answers that are closer to my knowledge base or that answer my question as I clarify it here if the current answers do misunderstand me.

Essentially what I am considering is a "right" triangle which can have complex side lengths. In particular, I was considering the triangle formed from sides of $2$,$1$, and $\sqrt{3}\,i$ side lengths. It seems natural to say that the angle between the shortest two sides (in absolute value) is $\theta = \frac{\pi}{2}-i\, \mathrm{arccosh}\,2$, and then I was asking, what does the imaginary part of that angle represent. I'm not asking about plugging in a complex value to $e^{i \theta}$, which from what I understood of the answers, was what I was taken to be asking.

"Complex length" is something of an oxymoron: a length in geometry is real, mostly because we want lengths to be absolutely comparable (to take values in an ordered field), and we want a limit of lengths to be a length (completeness).

Consequently, trying to extend the circular functions to a complex setting as ratios of sides of right triangles isn't obviously meaningful. (You can think of sides of a real plane triangle as complex numbers, but then the (non-real!) complex ratios are not the usual sine or cosine; matters are complicated further if you move into the realm of complex vectors.)

In case it's of interest, my answer to Parametric equation - of a hyperbola contains a couple of diagrams giving a geometric analogy between the circular and hyperbolic functions: 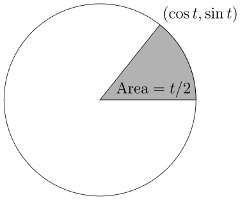 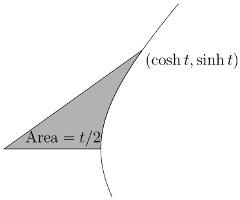 Let us build up an answer by stages.

Therefore, an angle's imaginary part may be said to represent an argument of decay that is to be associated with the real-valued angle.

Regarding the hypersphere, though it is attractive to suppose that $\mathbb C^2$ were four-dimensional, that view does not work out well in practice. Rather, it's two-dimensional with complex elements. Where you really see this is in $\mathbb C^3$, in which, say, the spatial Fourier transform of a magnetic field is represented. Maybe you haven't studied Fourier, yet, but when you do, you'll see that it just does not make much sense to think of the three-dimensional complex field as though it were six-dimensional.

I doesn't work like that. We never encounter imaginary angles in complex variables. Okay, suppose you concoct an imaginary $\theta=\alpha+i\beta$, then your complex number would be, say

This is, in fact, a logarithmic spiral with a flair coefficient of $-\beta$, i.e., it's shrinking.

There's no imaginary part to the angle. To state it another way, a point in the complex plane has a distance $r$ from the origin and an angle $\theta$ anticlockwise from the $x$-axis. An imaginary angle would simply tell you that the point is somewhere else.

Not the answer you're looking for? Browse other questions tagged complex-analysis trigonometry complex-numbers hyperbolic-functions or ask your own question.

8
Parametric equation - of a hyperbola

2
Finding the argument $\theta$ of a complex number
0
Euclidean circle in complex plane
0
If a complex number $z$ satisfies $|2z+10+10i| \leq 5\sqrt{3}-5$ then find ....
2
What does the parameter of hyperbolic functions represent?
0
How do we know complex number modification results in a rotation? How do we derive the $e$ piece?
0
Equivalence of two methods to obtain $\sin \theta \geq 1$ with a complex $\theta$
2
Trouble understanding sine, cosine of angles greater than $90$ degrees