A column of cubes 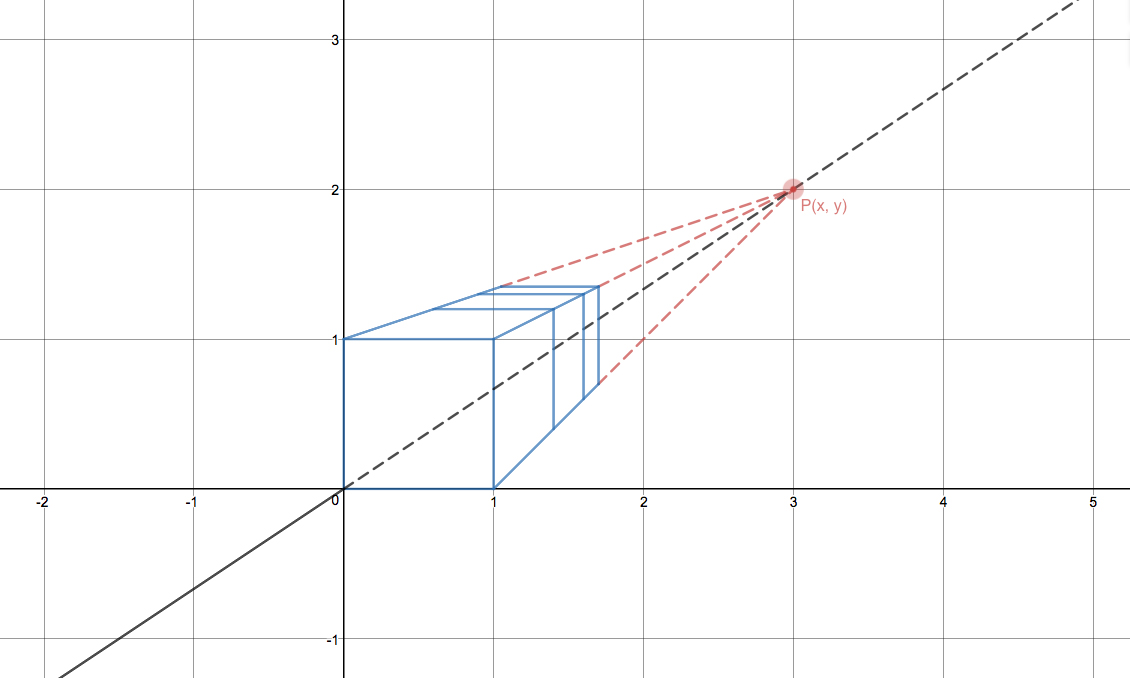 In the image, the length of the side of each cube is one unit. The dotted black line represents the negative side of the z axis. Given a vanishing point P(x, y) on the image plane, how do I calculate the distances between the horizontal and vertical blue lines? Another way to ask the same question is: how do I calculate the x and y coordinates of the unit marks on the z axis?

I've watched many videos on one-point perspective drawing, but none of them talk about the mathematical aspect of it. I've also read about a matrix multiplication method, but I don't quite understand it, and I wonder if there is a way to get my answer using just trigonometry and the given point P(x, y). Any help is greatly appreciated!

This is not a trick. It is not an approximation either. If the coordinate systems and the location of the observer are defined this way, you do get the 2D-projected coordinates simply by multiplying them by $d / z$, where $d$ is the distance from the observer to the projection plane (picture), and $z$ is the 3D $z$-coordinate for that point. I've explained why at the beginning of this answer.

The case where the eye is at $(0, 0, -d)$ but vanishing point at $( x_0 , y_0 )$ on the image plane, is a bit funny and somewhat more complicated, because the picture plane is skewed: it is not perpendicular to the line between the eye and the vanishing point $(0, 0, \infty)$. I haven't worked out the math for that case, because I've never needed to find out how to project an image that would be mostly viewed from the side.

Other projection models can be constructed from the same principles I outlined here, but the corresponding formulae are more complicated.

(After all, vanishing points are nothing special or magical: any point infinitely far away is a vanishing point. When used as a geometric tool for perspective, we simply utilize the fact that all parallel lines meet at the same vanishing point. If you wanted to draw a picture of a quarter henge with say five monoliths, you could use five vanishing points, one for each monolith.)

Non-planar projections, for example projecting on a cylinder, are derived the same way using optics and linear algebra: simply put, by finding where the line between the eye and the detail we are interested in, intersects the projection surface.

Matrices are only used in this kind of math, because they let us write the operations needed in more concise form: in shorthand, in a way. In fact, if you can add, subtract, multiply, divide, and use up to three variables in a formula, you know enough math to start delving into descriptive geometry. If you then learn about vectors, matrices, and versors, you can quickly master the principles used in 3D graphics, ray tracing, and descriptive geometry applications in general.

Using the fact that the columns of a transformation matrix are the images of the domain’s basis, we can immediately write down a matrix for the projection represented by the image: $$P=\begin{bmatrix}1&0&-\mu x_P&0\\0&1&-\mu y_P&0\\0&0&-\mu&1\end{bmatrix}.$$ The first two columns say that the vanishing points of the $x$- and $y$-axes are still at infinity (and that there’s no scaling in those directions), and the last column represents the origin’s image, which I’m assuming is the origin in the image’s coordinate system. The third column is the $z$-axis vanishing point, negated because we’re sighting “down” along the $z$-axis. It also includes a “foreshortening factor” $\mu$ which you’ll need to calibrate to get the desired spacing.

We want to generate a graduation of points $P_n(a_n,b_n)$ on line segment $AB$ such that $P_0(a_0,b_0)$, and $P_1$ is an arbitrary point that will give the "arbitrary scale" (corresponding to factor $\mu$ in @amd 's very interesting answer). Let us consider that (based on what you have taken for your own figure)

How formulas (1) (a) and (b) can be explained ? By preservation of cross ratio by projective transformations / perspectivities (http://www.cut-the-knot.org/pythagoras/Cross-Ratio.shtml).

Let us look at the case of the formula for the $a_n$: we just have to consider that what we look is the image of a real wall of cubes with their lower left corner at points $0,1,2,...$:

out of which one can deduce

Not the answer you're looking for? Browse other questions tagged 3d coordinate-systems or ask your own question.