In other words, I'm interested in comprehending and somehow describing perturbation of such vector field caused by the presence of singularity

I suppose there's some mind-blowing interpretation with vortices, sources, sinks and molecules travelling through the field analogous to those appearing in multivariable calculus. I really hope someone happens to see it and is so kind to share his or hers views.

I've come up with my own idea, the explanation may not be rigorous, but I'm quite convinced it can be made such. My question was restricted to meromorphic functions only, which is in fact misleading. It should be extended to a broader non-holomorphic class.

The intuition standing behind this observation is quite remarkable. 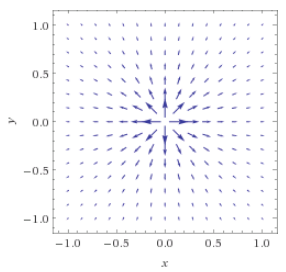 Here's a picture output with WolframAlpha for $\overrightarrow{F_{100}}$. As expected, there's no vortex and the field diverges evenly around $z_0=0$. In a limiting sense divergence at all the non-zero points vanishes with $n$ growing large and concentrates as a infinite peak at zero - just like the so called $\mathrm{\textit{Dirac's delta}}.$ Therefore my guess is that Dirac's measure would help to prove it formally. Other elegant intuitive way to explain the phenomenon is to imagine there's a source of evenly intensive light at $z_0$. No matter the distance and shape if we surround it by some closed curve, all the density is captured and thus must sum up to the same value $2\pi$. Other example would be straight wall which must capture exactly $i\pi$ of light density - same as half of a circle. This density by some trigonometry is $\frac{i}{1+t^2}$ and its antiderivative then equals $i\mathrm{arctan}(t)$, which gives $\pm i\pi$ as desired when evaluated over any straight line not passing through $z_0$ (plus or minus sign depends on whether singularity is on the left-hand side or on the right-hand side of the line).

Next step shall be driven by the question: what would happen if we'd consider $f(z)=\frac{i}{z}$. The integral by linearity is obviously equal to $-2\pi$, but take a look at another picture. 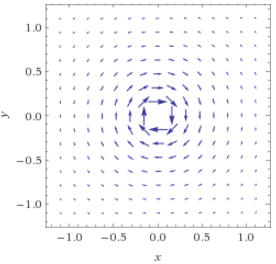 Can you guess what happens with the field for $-\frac{i}{z}$ and $-\frac{1}{z}$? Probably it's now obvious. It twists clockwise and converges to zero respectively. 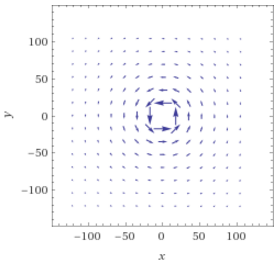 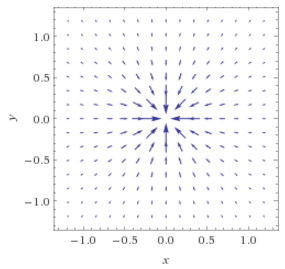 That corresponds to the fact that multiplacation of complex numbers of modulus $1$ is rotation. In terms of vectors it curls the field. Contour integral can be interpreted as work of the field on a travelling particle anti-clockwise around circle. Parallel work adds up as the real component and perpendicular as the imaginary one. Then you can easily guess the looks of any 'multiplied' field, it just combines forces. Modulus of the multiplier stands for its power.

The $2\pi$ constant is due to the circle circumference. However, what would happen if we've taken an ellipse to begin with? Nothing much really because of the transition to polar coordinates later on, which would convert it back to a circle anyway. The same would occur with any other closed curve, but integration would just become unnecessarily complicated. The choice of a circle is most natural. What's more that explains why contour integral value of a meromorphic function does not depend on the shape of region of integration 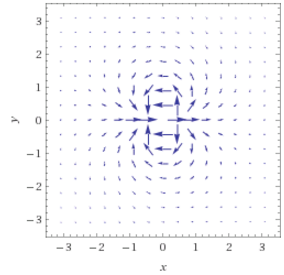 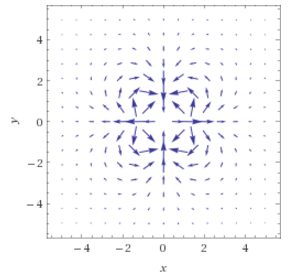 Here the complex plane is divided into even number of cancelling out subfields implying that the integral is equal to $0$, which is in fact true when computing according either to the definition or to given formula.

The above deals with all the negative powers of $z$. Positive ones and zero-th are holomorphic functions, so we know they get integrated to zero also. Notice now that vector fields are additive. Also, any complex function has non-zero radii annulus in which its Laurent series converges. To recall, Laurent series is defined as a power series including negative powers $$f(z)=\sum_{n=-\infty}^{\infty}a_nz^n, \quad a_i\in\mathbb{C}, \quad r<z<R\,.$$

We arrive with a conclusion that contour integral of any Laurent-expandable complex function depends solely on its $-1$st term and whether singularity is contained in the region of integration or not. If there's more than one singularity in such particular region, we know all the divergence and rotation is concentrated at these points so the fields don't interfere with each other and can be simply added with the restriction, that singularities have to be isolated ones, otherwise the limiting argument fails. That's quite exactly what residue theorem states.

The residue itself can be thought of as a setting of the field of $\frac{1}{z}$. It determines the power, sign and curl/divergence ratio. That fact can be used to transform the field to a irrotational normalised one just with multiplying by a single complex constant. Here the interpretation with light source comes in handy.

The formula holds also for any function with continuously differentiable real and imaginary part both bounded on a subset of $\mathbb{C}$ (to suffice Green's theorem assumptions and for existence of vector field).

Well, maybe someone happens to read it through and finds it interesting.

Not the answer you're looking for? Browse other questions tagged complex-analysis intuition complex-integration vector-fields or ask your own question.

5
Magnetic fields and the complex plane
3
Relationship between Cauchy-Goursat Theorem and conservative vector fields
0
Finding a potential function using integration (vector fields)
11
Vector fields, line integrals and surface integrals - Why one measures flux across the boundary and the other along?
5
$1/z^2$ and Morera's theorem - contradiction?
0
How to calculate $\iint \operatorname{curl}F\cdot ndS$ over semi-sphere with overly complex field?
2
Integral Curves of Vector Fields with Zero Divergence or Zero Curl
7
Evaluating a Lie Derivative of a Meromorphic Complex Form over a Holomorphic Vector Field.
3
Contour integral around a triangle equals the remainder term of the derivative - why?