Odd and even numbers in Pascal's triangle-Sierpinski's triangle

Moderator Note: At the time that this question was posted, it was from an ongoing contest. The relevant deadline has now passed. 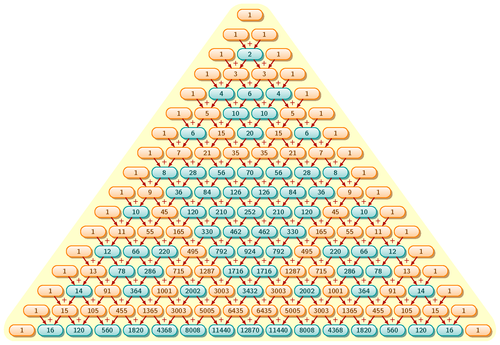 If anyone could give further direct/explicit proof and explanation for the modulo 2 relations Micah mentions(whether or not you do this through making it explicit in terms of Lucas' theorem is not a matter) and why the rules can determine whether a string is in Pascal's mod 2 triangle the way they do, that would be fantastic! I am not sure I understand where they are coming from, as neat as they are.

The following relations all hold modulo 2 (you can think of them as a special case of Lucas' theorem, or just prove them directly):

Using these, you can recursively check whether any given bit sequence $B=(b_1,b_2,\dots,b_k)$ could possibly occur:

Each application of one of these rules will approximately halve the length of $B$; if neither rule can be made to apply at any step, we eliminate $B$ from consideration. So eventually, if you don't eliminate $B$ from consideration, you'll end up at the trivial string $1$ (which gets sent to itself by both rules, and clearly appears in the triangle).

Applying this algorithm, we can see that your $1101$ fails immediately; it doesn't consist either of repetitions or of something padded with zeroes. The other specific examples you're asking about will fail for similar reasons. Any sequence with two adjacent $1$s cannot have rule 1. applied to it: that already means it's impossible for every other bit to be a $0$. Moreover, any sequence with an odd-length run of either $1$s or $0$s cannot have rule 2. applied to it, unless the run starts or ends the sequence; it makes it impossible to pair the bits off with each other. Since your sequences end with two $1$s, and have a run of $2^n-1$ $0$s in the middle, neither rule can be applied to them, so they can't possibly be in the triangle.

If you want to enumerate all sequences that appear somewhere, you can apply these two rules in reverse. For a given sequence $B=(b_1,b_2,\dots,b_k)$, how could it have been produced from rules 1. and 2.?

We know that, for any string which appears in the triangle, we can repeatedly apply rules 1. and 2. until the string $1$ is obtained. So we must be able to obtain all possible strings by repeatedly applying the backwards versions of rules 1. and 2. to the string $1$. Moreover, each backwards rule goes from a string of length $k$ to a string of length at least $2k-2$. So if we want to find all strings of length $k$, we'll only have to apply the algorithm until the shortest strings being produced at any given stage are of length at least $k$, and this will take about $\log_2 k$ steps.

This already gives us a pretty good algorithm for enumerating all possible strings. But we can do better. The implication of everything above is that any sequence comes from a $1$ floating somewhere in the triangle. But no matter which $1$ we start with, we'll end up with the same set of bit strings (as long as we adopt the standard convention that ${a \choose b}=0$ whenever $b<0$ or $b>a$; otherwise, some of the sequences we produce might go out of bounds).

Not the answer you're looking for? Browse other questions tagged combinatorics recurrence-relations fractals or ask your own question.

7
Behavior of Pascal's triangle in $n\mod m$ where $m>2$, any fractals?
2
Find the smallest positive integer $m$ such that $ {2015}\choose{m} $ is an even number
7
Exploring Properties of Pascal's Triangle $\pmod 2$
1
Combination is odd or even