The construction of such a function has proven difficult to me. The simplest example of flat Schwartz functions are Bump functions which are constant around zero. However since, by the Paley-Wiener theorem, the Fourier transform of a bump function is real analytic, it cannot be flat as the Taylor series in zero is a constant.

Also note that the important identity

implies that all but the zeroth moment of the fourier transform of a flat function vanish. Typically the graph of a function whose moments are almost all zero looks similar to a sinc function: oscillating indefinitely and decaying as $|x|\to\infty$.

As a second remark, if such a function exists, it can w.l.o.g. be chosen as an Eigenfunction of the Fourier transform since for arbitrary $f$

is an Eigenfunction of the Fourier transform, and the property of the derivatives being $0$ in the origin carries over to $g$ (since $\mathcal F^2(f)(t) = f(-t)$). This leads to a slight reformulation

Question: Does there exist an (even) Schwartz function $f\in\mathcal S(\mathbb R)$ such that

Any ideas, remarks, or references to relevant literature are greatly appreciated!

I am still interested in this question and have started a bounty. My progress towards finding such a function has been minimal. Although it is easy to find Schwartz functions that are flat - take e.g. $e^{-x^2-1/x^2}$ - it seems very hard to impossible to control both the moments in time and frequency space simultaneously. It doesn't help that concrete examples like the above have seemingly no closed form Fourier transform. Moreover forcing $f(0)=1$ makes thing even harder. The simplest example of such a flat schwartz function I was able to find is $\exp(-\exp(x^2-1/x^2))$.

On the other hand there might be an avenue towards disproving the existence of such function. As pointed out above a flat function cannot be real analytic, but there are theorems connecting analyticity of the Fourier transform to properties like its decay rate. However the one I am familiar with (Schwartz-Payley-Wiener) deals with functions of compact support only. There seem to be generalizations with some interesting discussion found here https://mathoverflow.net/questions/23679/fourier-transform-of-analytic-functions

Not sure why you want the $0$th moment to be $1$, this construction makes $f$ Schwartz such that all the moments of $f,\hat{f}$ vanish :

I think a simple inductive construction will work, though the details are somewhat tedious. My function $f(x)=\sum g_j(x-a_j)$ will consist of (widely) separated bumps located at $0<a_1<a_2<\ldots$.

The key observation is that the orthogonality that I impose to preserve earlier achievements is translation invariant in the sense that $g(x)$ is orthogonal to $1,x,\ldots , x^N$ precisely if $g(x-a)$ is. This means that by taking $a$ large, I can make $g_n$ as small as I want to in a given step, and this allows me to keep $f\in\mathcal S$ overall. (This requirement is really the list of conditions $|f^{(k)}(x^2+1)^m|\le 1$, $x\ge x_{N,k}$, and I satisfy these by paying attention to the first $N$ of these at a given step, and $N$ is increased gingerly.)

Remark: I'm no expert on these things, but I think it's known that there are measures (and functions, I would think) $f$ such that both $f$ and $\widehat{f}$ vanish on an interval, but I don't know if there are such examples in $\mathcal S$.

Here is some numerical evidence to the affirmative. 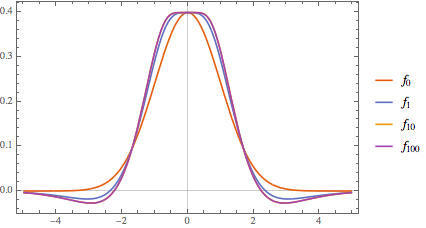 Sure seems to be converging to something.

Not the answer you're looking for? Browse other questions tagged fourier-transform schwartz-space or ask your own question.