There are a lot of problems that can be modeled with linear transformations, and the eigenvectors give very simply solutions. For example, consider the system of linear differential equations \begin{align*} \frac{dx}{dt} &= ax + by\\\ \frac{dy}{dt} &= cx + dy. \end{align*} This kind of system arises when you describe, for example, the growth of population of two species that affect one another. For example, you might have that species $x$ is a predator on species $y$; the more $x$ you have, the fewer $y$ will be around to reproduce; but the fewer $y$ that are around, the less food there is for $x$, so fewer $x$s will reproduce; but then fewer $x$s are around so that takes pressure off $y$, which increases; but then there is more food for $x$, so $x$ increases; and so on and so forth. It also arises when you have certain physical phenomena, such a particle on a moving fluid, where the velocity vector depends on the position along the fluid.

Solving this system directly is complicated. But suppose that you could do a change of variable so that instead of working with $x$ and $y$, you could work with $z$ and $w$ (which depend linearly on $x$ and also $y$; that is, $z=\alpha x+\beta y$ for some constants $\alpha$ and $\beta$, and $w=\gamma x + \delta y$, for some constants $\gamma$ and $\delta$) and the system transformed into something like \begin{align*} \frac{dz}{dt} &= \kappa z\\\ \frac{dw}{dt} &= \lambda w \end{align*} that is, you can "decouple" the system, so that now you are dealing with two independent functions. Then solving this problem becomes rather easy: $z=Ae^{\kappa t}$, and $w=Be^{\lambda t}$. Then you can use the formulas for $z$ and $w$ to find expressions for $x$ and $y$..

Can this be done? Well, it amounts precisely to finding two linearly independent eigenvectors for the matrix $\left(\begin{array}{cc}a & b\\c & d\end{array}\right)$! $z$ and $w$ correspond to the eigenvectors, and $\kappa$ and $\lambda$ to the eigenvalues. By taking an expression that "mixes" $x$ and $y$, and "decoupling it" into one that acts independently on two different functions, the problem becomes a lot easier.

Consider a matrix $A$, for an example one representing a physical transformation (e.g rotation). When this matrix is used to transform a given vector $x$ the result is $y = A x$.

Now an interesting question is

Are there any vectors $x$ which does not change their direction under this transformation, but allow the vector magnitude to vary by scalar $ \lambda $?

So, such special $x$ are called eigenvector(s) and the change in magnitude depends on the eigenvalue $ \lambda $.

I think if you want a better answer, you need to tell us more precisely what you may have in mind: are you interested in theoretical aspects of eigenvalues; do you have a specific application in mind? Matrices by themselves are just arrays of numbers, which take meaning once you set up a context. Without the context, it seems difficult to give you a good answer. If you use matrices to describe adjacency relations, then eigenvalues/vectors may mean one thing; if you use them to represent linear maps something else, etc.

One possible application: In some cases, you may be able to diagonalize your matrix $M$ using the eigenvalues, which gives you a nice expression for $M^k$. Specifically, you may be able to decompose your matrix into a product $SDS^{-1}$ , where $D$ is diagonal, with entries the eigenvalues, and $S$ is the matrix with the associated respective eigenvectors. I hope it is not a problem to post this as a comment. I got a couple of Courics here last time for posting a comment in the answer site.

Mr. Arturo: Interesting approach!. This seems to connect with the theory of characteristic curves in PDE's(who knows if it can be generalized to dimensions higher than 1), which are curves along which a PDE becomes an ODE, i.e., as you so brilliantly said, curves along which the PDE decouples.

When you apply transformations to the systems/objects represented by matrices, and you need some characteristics of these matrices you have to calculate eigenvectors (eigenvalues).

"Having an eigenvalue is an accidental property of a real matrix (since it may fail to have an eigenvalue), but every complex matrix has an eigenvalue."(Wikipedia)

In data analysis, the eigenvectors of a covariance (or correlation matrix) are usually calculated.

Eigenvectors are the set of basis functions that are the most efficient set to describe data variability. They are also the coordinate system that the covariance matrix becomes diagonal allowing the new variables referenced to this coordinate system to be uncorrelated. The eigenvalues is a measure of the data variance explained by each of the new coordinate axis.

They are used to reduce the dimension of large data sets by selecting only a few modes with significant eigenvalues and to find new variables that are uncorrelated; very helpful for least-square regressions of badly conditioned systems. It should be noted that the link between these statistical modes and the true dynamical modes of a system is not always straightforward because of sampling problems.

Lets Go Back to the Historical Background to get the motivation!

Given a Basis of V, T is characterized beautifully by a Matrix A,which tells everything about T.

The Bad part about A is that " A changes with the change of Basis of V ".

Why it is bad?

Because the Same Linear Transformation due to two different basis selection are given by two distinct matrices. Believe me! You cannot relate between the two matrices by looking at their entries. Really Not Interesting!

Intuitively, there exist some strong relation between two such Matrices.

Our Aim is to capture THE THING in common(Mathematically).

Now Eigen Values are a necessary condition to check so but not sufficient though!

"The Invariance of a Subspace of V under a Linear Transformation of V" is such a property.

That is if A and B represent the same T, then they must have all the eigenvalues equal. But The Converse is Not True! Hence not Sufficient but NECESSARY!

Measurements are what you do during experiments, so this is obviously of central importance to a Physics subject.

The state of a system is a vector in Hilbert space, an infinite dimensional space square integrable functions.

Then, the definition of "doing a measurement" is to apply a self-adjoint operator to the state, and after a measurement is done:

Self adjoint operators have the following two key properties that allows them to make sense as measurements as a consequence of infinite dimensional generalizations of the spectral theorem:

As a more concrete and super important example, we can take the explicit solution of the Schrodinger equation for the hydrogen atom. In that case, the eigenvalues of the energy operator are proportional to spherical harmonics: 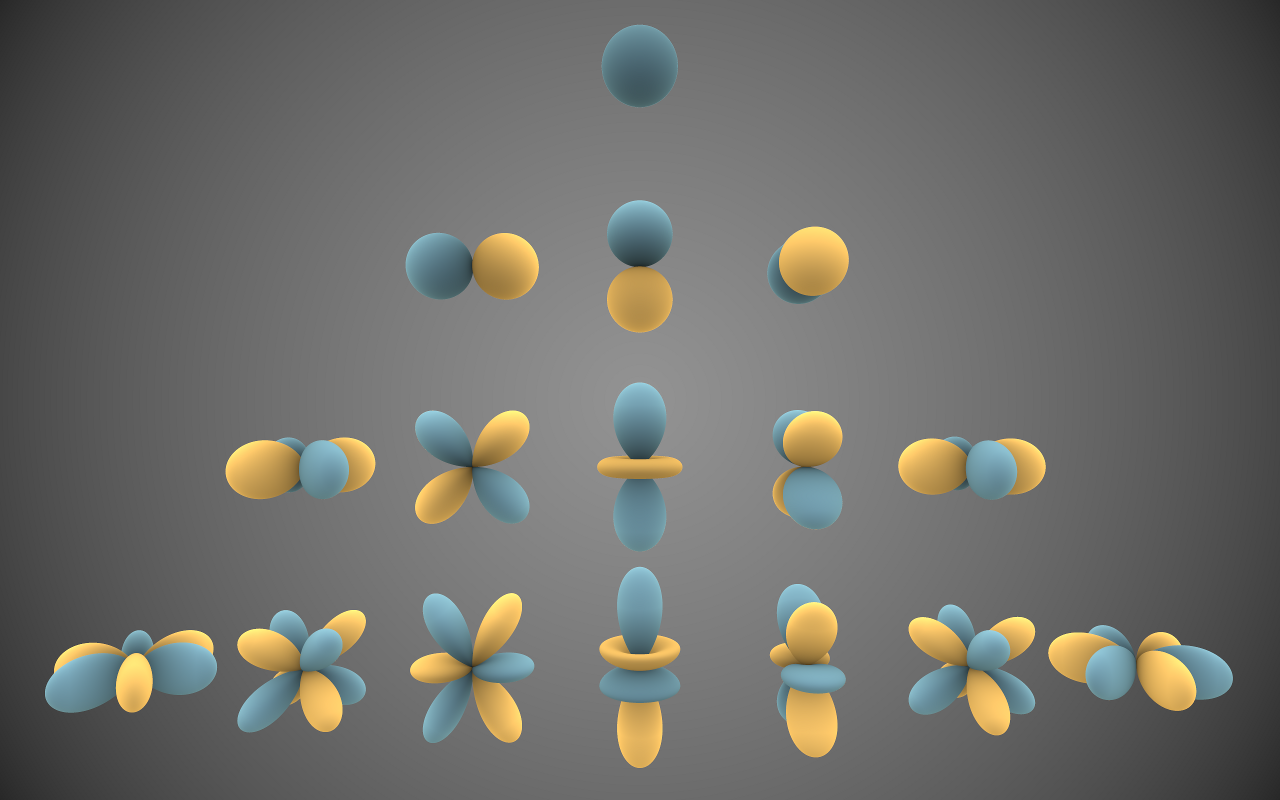 Therefore, if we were to measure the energy of the electron, we are certain that:

The time-independent Schrodinger equation is an eigenvalue equation

The left side of that equation is a linear operator (infinite dimensional matrix acting on vectors of a Hilbert space) acting on the vector $\Psi$ (a function, i.e. a vector of a Hilbert space). And since E is a constant (the energy), this is just an eigenvalue equation.

Have a look at: Real world application of Fourier series to get a feeling for separation of variables works for a simpler equation like the heat equation.

PageRank was mentioned at: at https://math.stackexchange.com/a/263154/53203 but I wanted to add one cute handy wave intuition.

PageRank is designed to have the following properties:

The difficulty then becomes that pages can affect each other circularly, for example suppose:

Therefore, in such a case

Therefore, one can feel that theoretically, an "iterative approach" cannot work: we need to somehow solve the entire system in one go.

And one may hope, that once we assign the correct importance to all nodes, and if the transition probabilities are linear, an equilibrium may be reached:

This is closely related to the above Google PageRank use-case.

The equilibrium also happens on the vector with eigenvalue 1, and convergence speed is dominated by the ratio of the two largest eigenvalues.

I would like to direct you to an answer that I posted here: Importance of eigenvalues

I feel it is a nice example to motivate students who ask this question, in fact I wish it were asked more often. Personally, I hold such students in very high regard.

This made it clear for me https://www.youtube.com/watch?v=PFDu9oVAE-g