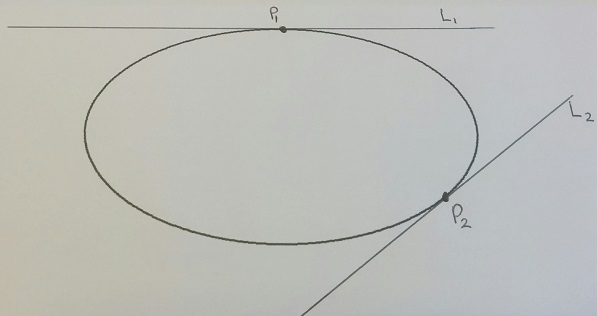 I went down the path of rearranging the derivative equation. I've substituted $m_2$ for $\frac{dy}{dx}$; the slope of $L_2$:

but don't see how this helps me because it's not a linear equation. How can I solve for my ellipse?

EDIT: I used the equation of an ellipse centred at the origin above, but this was a mistake. I'm happy to rotate/translate lines to make the calculations simpler and then transform back e.g. so that $x_1 = 0$.

Here is a geometric hint; I leave it to you to translate this to algebra.

You know the minor symmetry axis of the ellipse: It is the line orthogonal to $L_1$ passing through $P_1$. Now all you need to determine the center $O$ is another non-parallel line known to pass through $O$. Let $M$ be the midpoint between $P_1$ and $P_2$. Let $Q$ be the intersection point of $L_1$ and $L_2$. Then the straight line $MQ$ passes through $O$. 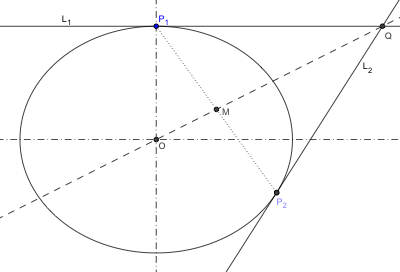 Why? Because that would be the case if the ellipse were a circle. Deforming a circle into an arbitrary ellipse can be done with an invertible affine transformation. Such transformations preserve line straightness, tangency and midpoint relationships. Therefore $MQ$ still passes through $O$ after the transformation.

Quantities $b,h,k,B,C$ are known. We only need to find the value of $a$ to determine the ellipse.

First we can determine $\theta$ as equating $k=b\sin\theta$, and consequently determine a using $h=a\cos\theta$.

By differentiating and using standard formulas, we find that the equation of the tangent at $P$ is

Using values of $a,\theta$ as computed, coefficients in equations $(1),(2)$ should turn out to be equal.

1
Ellipse : Equation to find "h" X co-ordinate of ellipse tangent to circle
0
Calculating Intersection of an Ellipse and a Line
2
find the center of an ellipse given tangent point and angle
1
Computing the Semimajor and Semiminor axis of an Ellipse
1
Create Ellipse From Eccentricity And Semi-Minor Axis
0
An ellipse and a confocal hyperbola meet at P ..
0
Find ellipse axis knowing two tangents and orientation of axis
0
An ellipse with center $(3,4)$ touches the $x$-axis $(0,0)$; the slope of its major axis is $1$. Find its eccentricity and equation.
0
ellipse with its center at the origin and its minor axis along the x-axis
1
An ellipse with major axis $4$ and minor axis $2$ touches both the coordinate axes. Locus of its Center and Focus is?