Are the Euler-Maclaurin formula and the Poisson summation formula related?

The Euler-Maclaurin formula, beautifully explained here by Justin Rheinstadter is expressed as:

while the Poisson summation formula is

where $\hat f$ is the Fourier transform of $f$.

This is the focus of my interest, trying to make some inroads into this other question. Unfortunately for the amateur math-curious, there is a paucity of didactic videos online on this latter topic, basically restricted to this authoritative Princeton video by Winston Ou with so much ambient noise, tiny handwriting, and talking softly to the blackboard that it is difficult to follow, or this horrendously screechy video by Steven Miller (otherwise a very engaging teacher).

I am getting familiarized with both these formulas for the first time, and I'd like to ask whether there are motivational or practical connections (sum from $m$ to $n$ in EMF versus over all integers in PSF), as well as for a bit of context for each one of them.

Both the Euler-Maclaurin formula and Poisson summation are basic examples of deeper ideas. But at their core, the underlying ideas are very different.

The Euler-Maclaurin formula can be thought of as coming from repeated integration by parts, regarding the initial sum as a Rieman-Stieltjes integral $$ \sum f(n) = \int_a^b f(t) d \lfloor t \rfloor, $$ where the constant terms in the antiderivatives appearing in the integrations by parts are chosen to minimize some cross error. This turns out to be the same view as estimating the expected error in an iterated composite trapezoidal rule for estimating an integral.

At its core, Euler-Maclaurin concerns estimating the difference between the discrete and continuous sums of a nice function $f(t)$. To that end, there exist generalizations to higher dimensions, and in particular to functions on polytopes. See this MO question for more on this connection, but the theme remains that one estimates a discretized sum (which is often quite hard to understand, but easier to actually compute) with an integral (which is often much easier to understand properties of, but can be hard to actually compute).

Many examples from elementary and analytic number theory of successes of Euler-Maclaurin formulas arise from computing high accuracy estimates of discrete sums of extremely well-behaved functions, such as computing $$ \sum \log n, \quad \sum \frac{1}{x}.$$ In these cases, the smoothness properties of the function $f$ are more easily viewed from the integral.

Conversely, Euler-Maclaurin formulas are used to give high accuracy estimates of integrals in standard numerical analysis methods, as discrete sums with understandable error terms are actually computable and estimable. Note that when approximating an integral $\int_1^b f(x) dx$, the error comes in the form of high derivatives of $f$, so this still leverages smoothness properties of $f$, but in a different way.

One can study Poisson summation for $\mathbb{Z}^n$ sitting within $\mathbb{R}^n$, or more general group quotients. Carrying this to one extreme leads to the Selberg Trace Formula (and in fact, one can directly view regular Poisson summation as a "trivial" trace formula. This point of view is apparent in the introductory chapter of Bump's Automorphic Forms and Representations, as a way of motivating eventual progress towards discussion trace formulas). From this point of view, it is clear that Poisson summation is fundamentally a consequence of representation-theoretic information.

Although over $\mathbb{R}/\mathbb{Z}$, this looks superficially similar to the integrals in Euler-Maclaurin summation, I would say that the underlying ideas are substantively different.

I don't mean to answer this question... as in providing "the answer", but as I'm researching the topic I'm gathering some interesting bits and pieces I'd like to collect in case I don't get an answer from someone who really knows what he's talking about... So...

From Methods for the Summation of Infinite Series by Henrik Stenlund:

[Poisson summation...] often this converts a long, slowly decaying sum to a short, rapidly decaying one.

From The Euler–Maclaurin and Taylor Formulas: Twin, Elementary Derivations by Vito Lampret:

From The Summation Formulae of Euler–Maclaurin, Abel–Plana, Poisson, and their Interconnections with the Approximate Sampling Formula of Signal Analysis:

The implications to be established in this paper between the assertionsof the summation formulae of Euler–Maclaurin (EMSF), Abel–Plana (APSF),Poisson (PSF) and the approximate sampling formula (ASF), are indicated by the arrows of the graphic in 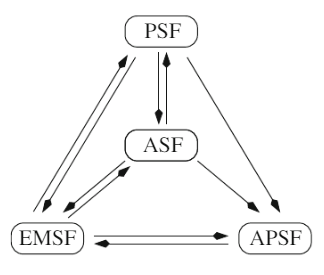 The conclusion: All the formulae are equivalent to each other.

In the question How does one use the Poisson summation formula? Ben Green notes:

... why not have it in mind to try using it whenever you have a discrete sum that you are having trouble estimating, especially if you fancy your chances of understanding the Fourier transform of the summands. You'll end up with a different sum and it might be a lot easier to understand, and you might even be able to approximate your first sum by an integral $\hat f(0)$ in the Poisson summation formula).