I saw this in a proof for the Central Limit Theorem:

It seems to be true when I plug in small values of $x$. But why does it work?

The easiest way to see this is to use the Mean Value Theorem. Note that since $\log(1-x)$ is twice differentiable (in particular its derivative is continuous) that means that

You may also know this process by another name: "linearization."

I am surprised by the earlier answers, all of which agree that the statement

was true. Actually, it is not, and the problem lies in the notion of smallness.

Now let us investigate two approaches suggested among the answers. 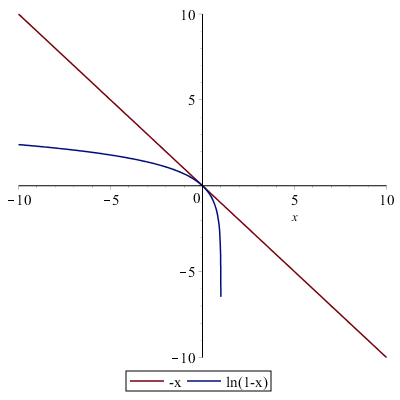 0
What is the characteristic function used for?
1
T statistic has t(n-1) distribution
0
Central Limit Theorem and adjusted standard deviation
2
Why prefer the t-score when the sample size is low?
1
Why do probabilities have to be small in poisson distribution?
0
Why small p-value rejects $H_0$
4
Why does experimental probability approach theoretical probability? Why does it converge only when there are large samples and not when it's small?
0
Why the normal distribution?
0
Why can we use empirical standard deviation when computing mean confidence intervals