Does there always exist a circle through three points such that any other points inside (or lie on) the circle?

Could You help me give a proof that:

Given a finite number $(>3)$ of points in the Euclidean plane, then exist a circle through three points such that any other points inside (or lie on) the circle. 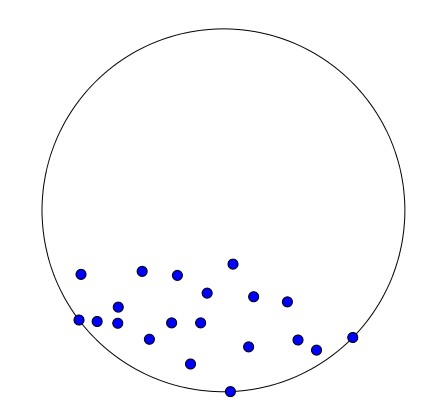 Start with the convex hull of the points. Pick any edge of that hull, and extend it to a line. That line can be seen as a degenerate circle of infinite radius, or more usefully of curvature zero. Now start increasing the curvature while maintaining contact with the two incident points. These two points and the curvature uniquely define the circle, which makes this easy to describe. There are two possible scenarios. Either you at some point encounter a curvature for which the circle starts touching another point from your set. In that case you are done.

Or you increase the curvature as much as you can without encountering that situation. In that case you end up with a circle which has the two points antipodal on a diameter, and all the other points within. Which means that by coincidence you picked points which are particularly far apart, farther than any other pair of points in your set (since two points inside the circle have to be less than the diameter away from one another). Start over with a different edge from the convex hull and you are good.

There are some special cases worth considering. It might happen that you already touch a thrid point in the initial configuration, with curvature zero. That can happen if you have collinear points on your convex hull. If you pick the outermost points from such a collinear edge, you do touch the inner points initially, but move away from them as the curvature increases.

If all your points are in a straight line, then choosing the outermost points of each collinear edge leaves you with exactly one pair to choose. You will end up in the position where the circle of maximal curvature still only touches two points, and you won't have a different edge to choose from. So in that case the statement holds only if you also allow circles of zero curvature.

See also A circle with infinite radius is a line.

Not the answer you're looking for? Browse other questions tagged combinatorics geometry reference-request analytic-geometry or ask your own question.

25
A circle with infinite radius is a line

0
Any finite set of non-collinear points on a plane determines a circle that does not contain other points in the interior
4
Constructing a circle that internally tangents a circle $\gamma$ and passes through two internal points.
1
Equation of circle through three given points.
14
Given $2015$ points, show that it is possible to separate them such that $1007$ of them lie inside the circle
2
There exist three consecutive vertices A, B, C in every convex n-gon with n≥3, such that the circumcircle of triangle ABC covers the whole n-gon
0
Given $2n+1$ points in general position on the plane, show that some 3 of them determine a circle separating the remaining into two sets of $n-1$
0
Finding the position of a given circle that contains the most randomly placed points
1
Equations in trilinear coordinates for the line through two points, and the circle through three
2
Given five coplanar points such that no line passes through exactly two of them, prove that they are all collinear.