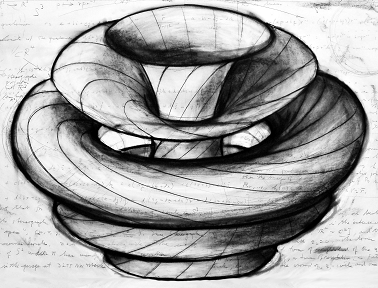 This can be visualized. A vertical line with the point at infninity is a generalized circle, which corresponds to the north pole of the base space $S^2$, while a specific circle around that line corresponds to the south pole of $S^2$. Everywhere in between is a torus which is a circle's worth of circles, just as in between the north and south pole of $S^2$ there are circles' worths of points.

However, another type of visualization should be possible.

Recall smashing pointed spheres is like adding whole numbers; the property $S^n\wedge S^m\simeq S^{n+m}$ implies that homotopy classes of pointed spheres form a free monoid on one generator with respect to the smash product operation. Moreover, there is an adjunction $$\mathrm{Map}(S^n\wedge X,Y)\simeq \mathrm{Map}(X,\Omega^nY),$$ where $\mathrm{Map}(X,Y)$ is the space of basepoint-preserving continuous maps $X\to Y$ equipped with the compact open topology and $\Omega^k=\Omega\cdots\Omega$ where $\Omega Y$ is the loop space $\mathrm{Map}(S^1,Y)$.

Therefore, we should be able to interpret the Hopf fibration $S^3\to S^2$ as a basepoint-preserving continuous map $S^1\to\mathrm{Map}(S^2,S^2)$, which should be mentally visible as a looped animation of a sphere immersed into another sphere.

Question. How do we visualize this?

One idea is to decompose $\mathbb{R}^3$ into (generalized) spheres all tangent to the $xy$-plane at the origin, which is essentially a based map $S^1\to\mathrm{Map}(S^2,S^3)$, and then project down onto $S^2$. Perhaps this can be done by somebody mentally by appropriately intersecting these spheres with the tori of the artist depiction above, but I cannot do that in my head to see the effect in the base space $S^2$.

Here is an analogy to illustrate what I mean some more. The Hopf fibration may be interpreted as a representative of the generator of $\pi_3(S^2)$. Well, $\pi_2(S^2)$ also has a generator, the identity map. It may be interpreted as a based map $S^1\to\mathrm{Map}(S^1,S^2)$ as follows: crumple a rubber band to a single point on the sphere, then wrap the rubber band all the way around the sphere over one side and back down the other until it gets crumpled again down to that single point.

More precisely, if we decompose $\mathbb{R}^2$ into (generalized) circles tangent to the $x$-axis at the origin and then stereographically project up to $S^2$, the result is the same as if we took a tangent plane at the sphere's basepoint, rotated it around a tangent line and intersected with the sphere to get smaller then bigger then smaller again circles.

Presumably something analogous can be done with the Hopf fibration and a "crumpled up balloon" instead of a rubber band.

There are many ways to see this, since there are many choices how to identify our $\mathbb{S}^3$ (seen as the union of your picture with ∞) with the suspension of $\mathbb{S}^2$. The problem is, however, to find a description that is as easy to visualise as possible. I will choose one which I particularly like (and try to explain why I like it).

The picture which you included is the foliation of $\mathbb{R}^3$ by fibres of the Hopf bundle. For concreteness, let us assume that the $z$-axis (call it $N$) maps to the north pole of our target $\mathbb{S}^2$ and let the unit circle in the $xy$-plane (call it $S$) map to the south pole $S$.

One idea would be to write $\mathbb{R}^3$ as the union of spheres centred at the origin. The sphere of radius $0$ maps to $N$, while the sphere of radius $1$ maps onto the target $\mathbb{S}^2$ since it intersects all the fibres. This can be seen as follows. The equator of that sphere is our fibre $S$, so it links with any other fibre once (one of facts about the Hopf bundle). Now any of the hemispheres of that unit sphere is a Seifert surface for $S$, and hence must intersect all other fibres (algebraically) once (by one of the definitions of the linking number). Since it intersects all fibres, it hits all points in the target.

I actually like this sphere more than others, since for them $f_t$ is not surjective. Let me now show one foliation of $\mathbb{S}^3$ for which the resulting $f_t$ are all surjective.

In the picture below, I consider one choice of a solid torus, say the one which is the preimage of the southern hemisphere of the target. It has two caps, which are the disks bounded by the longitude (blue) and meridian (red). The right picture depicts the result of the symmetric surgery on the torus: this is an ambient surgery which uses both disks at once. We see that the resulting sphere (the union of grey, two blues, two reds and the yellow square) intersects all fibres.

Note that using any one of the caps to do surgery would also turn the torus into a sphere, but it would not produce a family of surjective maps as I wanted.

So let us foliate $\mathbb{S}^3$ by tori and the two circles (the blue one $N\cup ∞$ and the red one $S$) and pick caps on all tori. For example, all blue caps are disks centred at origin in the $xy$-plane and all red caps are in the $xz$-plane with boundary containing the origin. When we do symmetric surgeries on all the tori, we will make sure that the yellow region grows around the longitude and shrinks around the meridian, until it collapses to the red unit circle. Symmetrically in the other direction.

Each $f_t$ is almost a $2$-to-$1$ map from $\mathbb{S}^2$ to itself, since each fibre -- except those contained in the corresponding torus for $f_t$ -- intersects each of the spheres in the family precisely twice. Note that the local degrees at those points of the intersection are $+1$ and $-1$ (since the two push-offs of a cap are oppositely oriented), giving the total degree $0$.

You can now pretty much visualise how each $f_t$ looks like. For example, the one from the picture will send the grey region to the equator of the target, the red disks will got the southern hemisphere and the blue disks will go to the northern.

Not the answer you're looking for? Browse other questions tagged algebraic-topology homotopy-theory fiber-bundles visualization hopf-fibration or ask your own question.

2
Topology of a specific 2-manifold embedded in 3-sphere