and I have discovered sentences like these a couple of times in a similar context. I'm not completely sure if I'm understanding this correctly, though. The core of this statement seems to be the more general notion, that we gain an Algebraic viewpoint during this passage.

But in what sense is an Algebraic viewpoint really 'discrete'? Is it the notion that we are looking at structures coming from finitary operations instead of structures together with which we are considering limits? Can somebody elaborate on this a little bit (preferably not by using too much higher category theory, I only know some basic concepts and not all of them...)?

I'm also looking forward to any answers to this question, but no one answered so far. So I'm trying to provide some viewpoints.

Since all paths are glued onto two points (precisely: elements), the notion of path has vanished in the RHS above and discrete information of the original space (the number of path components) has shown.

In $\mathbf{Top}$ we first relate points/mappings/paths by a topological concept, then glue the related objects together, and finally get a new (often discrete) structure where the topological concept we initially introduced vanishes.

It is just like: in algebra we quotient a group $G$ along its commutator subgroup $C_G$, and get an Abelian group $G/C_G$, in which all commutators vanish (become identity).

In advance, let the annulus in the following picture be a pointed topological space $X$. The fundamental group functor $\pi_1:\mathbf{Top^0}\to\mathbf{Grp}$ makes every class of paths that is related by homotopies in $X$ become a single element in $\pi_1(X)$: 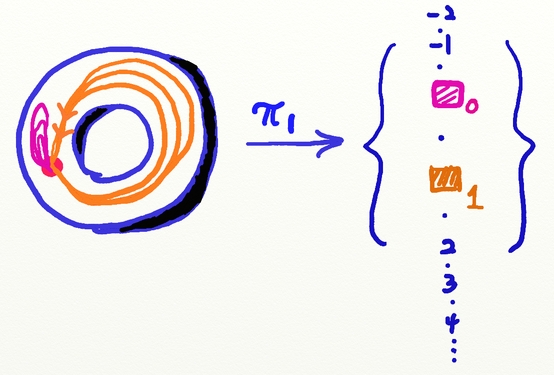 Eliminating such topological concept in a space yields a discrete structure $\pi_1(X)\cong (\mathbb{Z}, +)$. Operations defined for classes of paths (eg. concatenation) may look like manipulating discrete elements in $\pi_1(X)$.

Likewise, in the category $\mathbf{Top}$, there are continuous maps that can be associated by homotopies (in some sense, associated by structures of continuum): 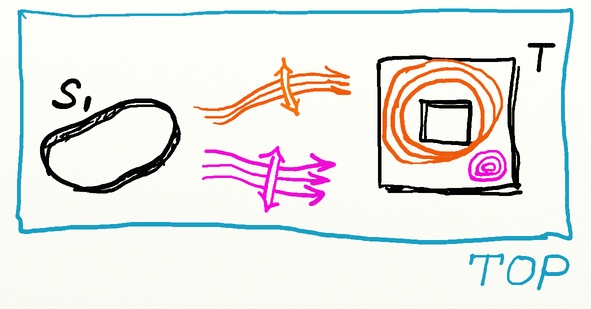 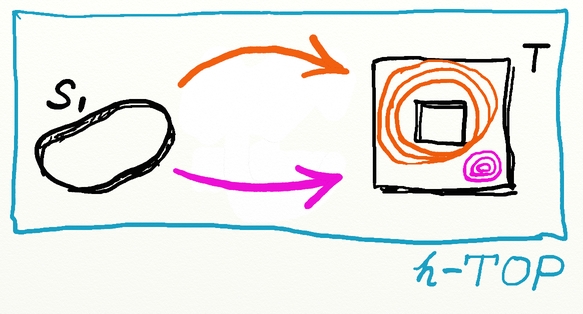 Thus, (maybe more than) a continuum of morphisms are packed into one. We take a "bunch" of morphisms at once, and study interactions between "bunches". These bunches again considered to be discrete, since no pairs of "big" morphisms are homotopic anymore.