Why is Euclidean geometry scale-invariant?

I became curious about the justification of this principle recently when I was asked to explain pi, the ratio of circumference to diameter of a circle, to a young student. It occurred to me half way through the explanation that I do not know a reason why pi exists; I'm not sure why all circles have the same ratio.

I know that Euclidean geometry is distinguished from other geometries by the parallel postulate, the statement that for any line and any point not on the line, there exists a unique line parallel to the original and through the point.

My question is, "How can I go from this parallel postulate and other relevant features of geometry to understanding why Euclidean geometry has no innate length scale involved?"

Similarity is a special feature of Euclidean geometry. It follows from the Euclidean parallel postulate:

For each line and each point not on the line, there is a unique second line, parallel to the first, that contains the point.

As a matter of fact, the following claim, called Wallis's postulate, is equivalent to the parallel postulate:

There is a list of 15 claims all logically equivalent to the Euclidean parallel postulate on the Wikipedia Parallel Postulate article. One of which, not surprisingly, is the Pythagorean theorem.

Perhaps the following will provide some insight.

AAA Similarity Theorem: If two triangles have all three pairs of angles congruent, then the triangles are similar.

the proof of which does not require the parallel postulate but is rather involved. Nonetheless, with it, we can show:

Proof: We can construct a unique ray $\overrightarrow{DP}$ so that $\angle EDP \cong \angle A$. We can similarly construct a unique ray $\overrightarrow{EQ}$ on the same side of $\overleftrightarrow{DE}$ so that $\angle DEQ \cong \angle B$. Since the angle measures of the constructed angles, $\angle EDP$ and $\angle DEQ$, sum to less than $180$, by Euclid's fifth postulate (equivalent to Euclidean parallel postulate), the two rays must intersect at some point $F$ forming a triangle $\triangle DEF$. By the angle-sum theorem (also logically equivalent to the Euclidean parallel postulate), $\angle C \cong \angle F$. Now by the AAA similarity theorem, the two triangles are similar. $\square$

Conversely, let us assume Wallis's postulate and from it derive the Euclidean parallel postulate.

Proof of EPP from Wallis's Postulate: Suppose we have a line $\ell$ and a point $P$ not on the line. We can drop a perpendicular from $P$ to line $\ell$ and let the perpendicular intersect $\ell$ at point $F$. Then construct a new line $m$ at $P$ at $90$ degrees to our perpendicular. This new line will be parallel $\ell$. If it were not, $m$ and $\ell$ would intersect forming a triangle which would violate the exterior angle theorem.

It remains to show the line $m$ is unique. Suppose there were a different line $n$ also through $P$. We must show $n$ is not parallel, that is, line $n$ intersects $\ell$. 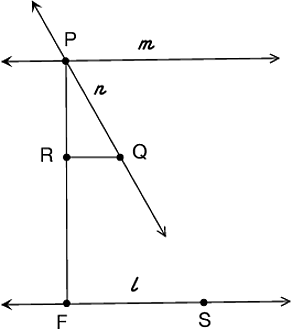 Maybe this reason isn't "deep" enough, but it's because the Euclidean distance formula (the Pythagorean identity) is scale invariant:

whereas the distance formulas in spherical geometry:

I'm not sure if this is making any sense, but this is what I've learned so far from studying Projective geometry. Hope it helps...

3
Why is the ratio of the circumference of a circle to its diameter independent of the circle?
12
What are the postulates that can be used to derive geometry?
7
What types of geometries are scale-invariant?
1
After saw this piece of discussion, i ask myself what is the most rigorous definition of the circle, but i can't figure it out
5
How to prove that Pi exists?
1
What is the operational way of discovering scale invariance of differential equations?