Could someone explain conditional independence?

My understanding right now is that an example of conditional independence would be:

The scenario you describe provides a good example for conditional independence, though you haven't quite described it as such. As the Wikipedia article puts it,

Strictly speaking, this scenario only works if there's always the same amount of traffic delay in the city overall and it just moves to different neighbourhoods. If that's not the case, then it wouldn't be correct to assume independence between the two probabilities, since the fact that one of the two is getting home late would already make it somewhat likelier that there's heavy traffic in the city in general, even without knowing that they live in the same neighbourhood.

The example you've given (the snowstorm) is usually given as a case where you might think two events might be truly independent (since they take totally different routes home), i.e.

A clearer example paraphrased from Norman Fenton's website: if Alice (A) and Bob (B) both flip the same coin, but that coin might be biased, we cannot say

but they are not conditionally independent given $C$:

Other answers have provided great responses elaborating on the intuitive meaning of conditional dependence. Here, I won't add to that; instead I want to address your question about "what it does for us," focusing on computational implications.

Now suppose our information about the problem tells us that $A$ and $B$ are conditionally independent given $C$. A conventional notation for this is: $$ A \perp\!\!\!\perp B \,|\, C, $$ which means (among other implications), $$ P(A|B,C) = P(A|C). $$ This means that the last of the many expressions I displayed for $P(A,B,C)$ above can be written, $$ P(A,B,C) = P(C)P(B|C)P(A|C). $$ From a computational perspective, the key thing to note is that conditional dependence here means we can write the 3-variable function $P(A,B,C)$ in terms of 1-variable and 2-variable functions. In a nutshell, conditional independence means that joint distributions are simpler than they might have been. When there are lots of variables, conditional independence can imply grand simplifications of joint probabilities. And if (as is often the case) you have to sum or integrate over some of the variables, conditional independence can let you pull some factors through a sum/integral, simplifying the summand/integrand.

This can be very important for computational implementation of Bayesian inference. When we want to quantify how strongly some observed data, $D$, support rival hypotheses $H_i$ (with $i$ a label distinguishing the hypotheses), you are probably used to seeing Bayes's theorem (BT) in its "posterior $\propto$ prior times likelihood" form: $$ P(H_i|D) = \frac{P(H_i)P(D|H_i)}{P(D)}, $$ where the terms in the numerator are the prior probability for $H_i$ and the sampling (or conditional predictive) probability for $D$ (aka, the likelihood for $H_i$), and the term in the denominator is the prior predictive probability for $D$ (aka the marginal likelihood, since it is the marginal of $P(D,H_i)$). But recall that $P(H_i,D) = P(H_i)P(D|H_i)$ (in fact, one typically derives BT using this, and equating it to the alternative factorization). So BT can be written as $$ P(H_i|D) = \frac{P(H_i,D)}{P(D)}, $$ or, in words, $$ \mbox{Posterior} = \frac{\mbox{Joint for everything}}{\mbox{Marginal for observations}}. $$ In models with complex dependence structures, this turns out to be the easiest way to think of modeling: The modeler expresses the joint probability for the data and all hypotheses (possibly including latent parameters for things you don't know but need to know in order to predict the data). From the joint, you compute the marginal for the data, to normalize the joint to give you the posterior (you may not even need to do this, e.g., if you use MCMC methods that don't depend on normalization constants).

Now you can see the value of conditional independence. Since the starting point of computation is the joint for everything, anything you can do to simplify the expression for the joint (and its sums/integrals) can be a great help to computation. Probabilistic programming languages (e.g., BUGS, JAGS, and to some degree Stan) use graphical representations of conditional dependence assumptions to organize and simplify computations.

Take a random sample of school children and for each child obtain data on:

The two will be (positively) correlated, in that the bigger the foot size the higher the literacy score.

The random variables $F$ and $L$ are not independent. 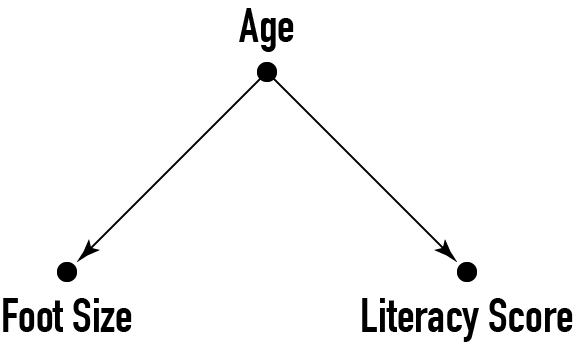 Obviously a bigger foot size is not the direct cause for a higher literacy score. What correlates the two is the child's age ($A$), which is the confounder in the fork structure above.

Again, the random variables $F$ and $L$ are not independent.

By conditioning on age (the confounder), we no longer consider the relationship between foot size and literacy for the whole sample, but per each age group separately.

Doing so annihilates the correlation caused by the confounder, and makes foot size and literacy score independent.

While age does hint at literacy score, if now I tell you someone's foot size it doesn't hint a smidgen about their age because their age is given (we condition on it) - no correlation.

So this was just an example of two random variables $F$ and $L$ that were:

We say that $F$ is conditionally independent of $L$ given $A$:

Not the answer you're looking for? Browse other questions tagged probability independence or ask your own question.

123
Intuition behind Conditional Expectation
5
Why wrong or unacceptable to write Pipes on their own, without any probability?
1
Given a coin's bias, how can two flips be conditionally independent?
0
Probability patient has disease given positive test and a symptom
0
A simple equation between two ratios of probability: any significance?
1
can you give an intuitive example of $X\bot (A\cap B)$ but not $X\bot A$ and not $X\bot B$?