When does a sequence of rotated-and-circumscribed rectangles converge to a square?

Recently I came up with an algebra problem with a nice geometric representation. Basically, I would like to know what happens if we repeatedly circumscribe a rectangle by another rectangle which is rotated by $\alpha \in \left( 0, \frac {\pi} {4}\right)$ radians. Use this picture as reference: 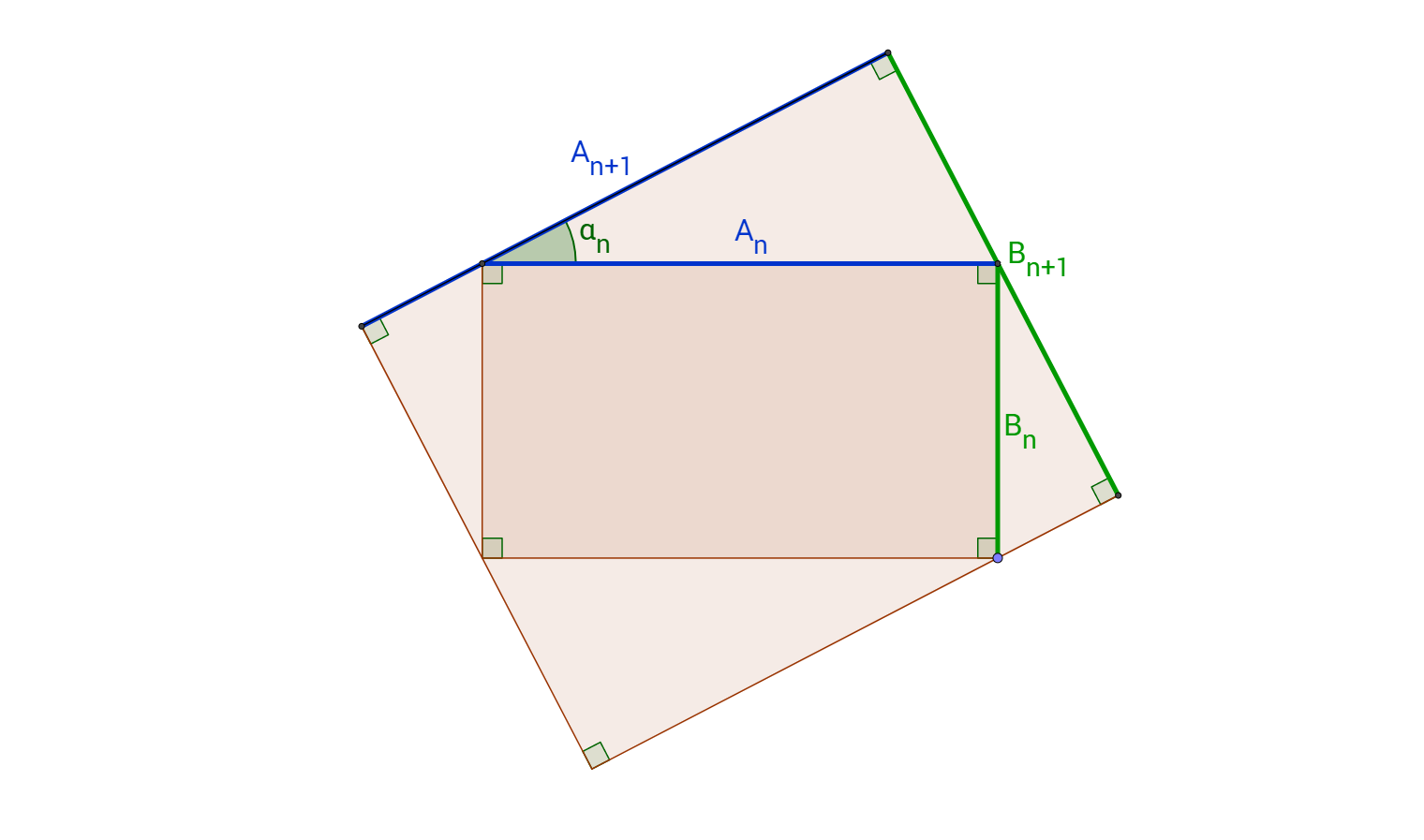 In particular, do the resulting rectangles converge to a square?

It is rather easy to show that the rectangles do converge to a square if $\alpha$ is constant throughout the process. However, if we make it more general by defineing a sequence $\left(\alpha_n\right)_{n=1}^{\infty}$ of angles and use $\alpha_i$ in the $i$'th operation, then the answer seems to depend on the chosen sequence. So, for which sequences $\left(\alpha_n\right)_{n=1}^{\infty}$ do the rectangles converge to a square?

I tried out a few sequences in C++ to notice some patterns. Interestingly, rectangles seem to converge to a square if and only if $\lim_{n \to \infty} \left( \sum_{i=0}^n \alpha_i \right) = \infty$. In particular, for $\alpha_n = \frac{1}{n}$ the convergence is really slow, however, it still seems to be converging.

Also, I believe that showing $\lim_{n \to \infty}\left(A_n-B_n\right)=1$ would be an even stronger result for this problem. Does such a replacement have any influence on the result?

For the record, I am still a high school student, so I have no idea how hard this problem might actually be. Any help would be highly appreciated.

P.S. This is my first question on the site, so please don't judge my wording and style too much. Feel free to ask questions if anything is unclear.

This is a particularly good first question!

Using a little linear algebra, we can actually write sufficiently explicit formulas for $A_n$ and $B_n$ to confirm your conjecture, namely that the divergence of $\sum_{i = 1}^{\infty} \alpha_i$ is sufficient and necessary.

Remark The Jordan decomposition $\Gamma_i = P \pmatrix{\lambda_i^- & 0 \\ 0 & \lambda_i^+} P^{-1}$ is in this problem more than a convenient tool---it also gives some geometrical insight into why rotating and circumscribing makes rectangles more squarelike. The matrix $P^{-1}$ rotates a vector in the $ab$-plane (which we can view as a vector from the rectangle to one of its corners) by $\frac{\pi}{4}$. Then $\Gamma_i$ shears the rotated vector, lengthening its component in the direction that corresponds to the quantity $a + b$ and shortening its component in the direction that corresponds to $a - b$, which we may view as the absolute defect from squareness. Finally, the matrix $P$ rotates back the one-eighth of a turn, which we may view as returning back to the original $ab$-coordinates.

This will not explain all your observations, but might shed some first light on what is going on.

As you noted we can find this nice recursive definition for the sequence of the side lengths:

This looks pretty linear and can be expressed via some vectors and matrices:

So the problem reduces to studying the behavior of the matrices $R(\alpha)$ and their compositions $\prod_i R(\alpha_i)$. This is because

Applying this to the vector $(A_0,B_0)^\top$ describing your initial rectangle will give you

And this is indeed a square as both side lengths are equal (in the limit of course).

Not the answer you're looking for? Browse other questions tagged sequences-and-series convergence-divergence or ask your own question.