I do not care about the spaces $U$, $V$ in the theorem being non-open - one really ought to make that demand if one is going to decompose the space. However, what do you do when the intersection is not path connected? There are many 'nice' spaces which have this property. For instance, I can easily sketch $3$ in Geogebra: 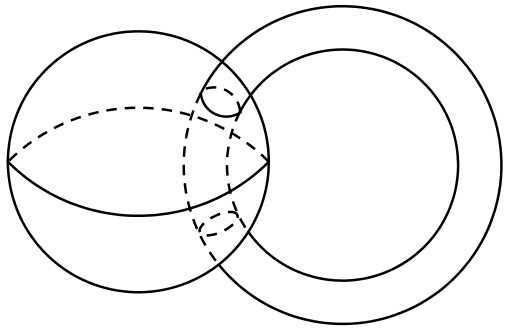 $2.$ The same idea as in $(1)$ but instead we have two tori instead of a sphere and a torus. The issue with the van Kampen Theorem is the same 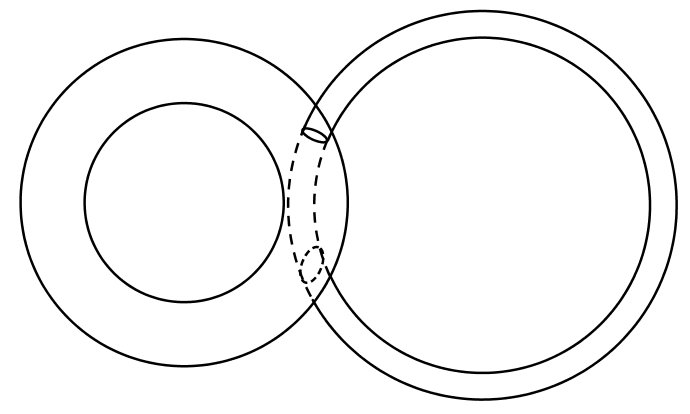 $3.$ $X=U \cup V$, where $U$ is a 'paper strip' and $V$ is the torus. The paper strip enters and exits the torus. Again, each is open and path connected but their intersection is four 'line segments' on the torus - certainly not path connected. The theorem fails again. 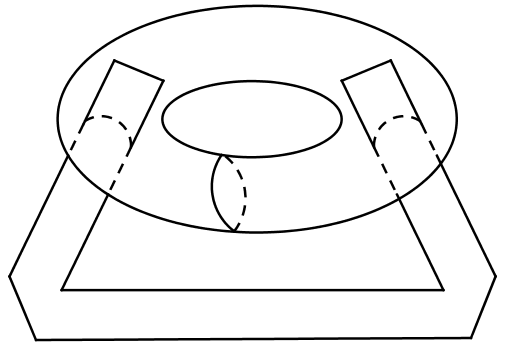 It is easy to think about the same and figure out what the fundamental group 'ought to be' - but I have no idea how one would actually prove it is the correct group. Is there a way for any of these examples - or even generally - that one should go about calculating the fundamental group when the intersection of $U$ and $V$ is not path connected?

In each of your examples the $U,V$ are not open. Further, you can find open $U_1, V_1$ such that $X = U_1 \cup V_1$ and Van Kampen applies. In example 1 let $U_1$ be the intersection of an arbitrarily small neighborhood of the sphere with $X$ and $V_1$ be the intersection of an open ball with $X$ such that the ball contains the torus and not all of the sphere. Here we have $U_1 \cap V_1$ homotopic to an open disc. The other examples can be treated similarly.

The issue of nonconnected intersection is discussed in this mathoverflow entry, and this stackexchange entry. See also this 1984 comment of A. Grothendieck on the following longstanding generalisation of the Seifert-van Kampen Theorem.

An appropriate version of the Seifert-van Kampen Theorem is that if $X=U \cup V$ is a union of open sets $U,V$ with intersection $W$ then the diagram of morphisms of groupoids induced by inclusions $$\begin{matrix}\pi_1(W,C) & \to & \pi_1(V,C)\\ \downarrow&&\downarrow \\ \pi_1(U,C) & \to & \pi_1(X,C) \end{matrix}$$ is a pushout of groupoids if $C$ meets each path component of $U,V,W$. The proof by verification of the universal property does not require knowledge that pushouts of groupoids exist, nor how to construct them, and in this form is really no more difficult than the single base point case.

If $W$ has many path components, e.g. $1,000$, but $X$ is still pathconnected, it may be more convenient not to try to reduce to a single basepoint, especially if a choice of such basepoint destroys any symmetry in the situation.

One does need to develop further algebra of groupoids in order to interpret the pushout theorem, e.g. for the examples given in the question. For example, the fundamental group of the circle derives from the pushout diagram of groupoids

The appropriate algebra of groupoids is given in Higgins' downloadable book Categories and Groupoids (1971) reprint 2005, and is explained also in Topology and Groupoids, the third edition of a book published in 1968.

More background, and also indication of how the notion of groupoid is developed in higher dimensions, is given in this paper.

16
Does May's version of groupoid Seifert-van Kampen need path connectivity as a hypothesis?