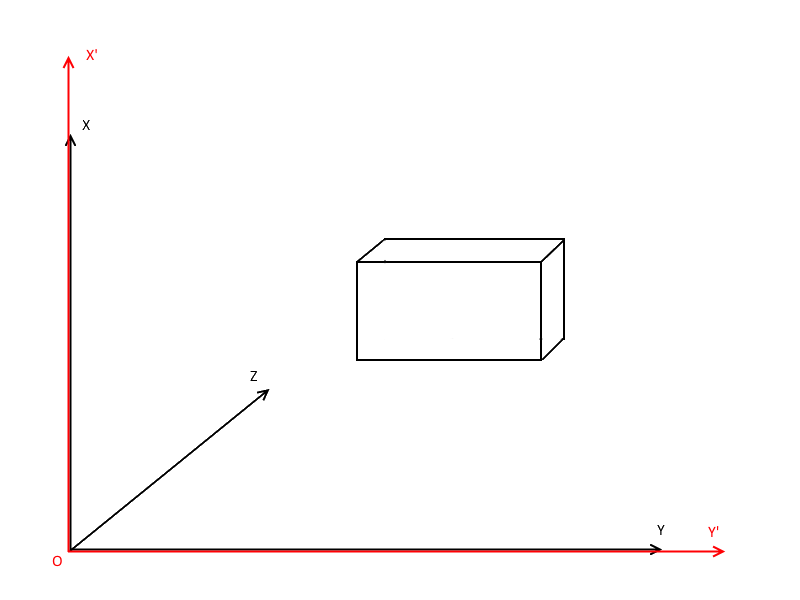 As the title says, i want to project 3D points with known (x, y, z) coordinates into a 2D plane with (x', y') coordinates, knowing that the x and y axes are respectively identical to the x' and y' axes ( The (OXY) plane is the same as the (OX'Y') plane) and they have the same measure unit.

So basically what i need is the formula to transform the a point's (x, y, z) coordinates into (x', y') coordinates with a perspective projection ( The further an object is from the 2D plane the smaller it seems).

3D projection is really very simple. The hard part is understanding how it is done; and that is what I shall try to explain here. It is all based on optics, and (linear) algebra.

If we know the 3D coordinates in the above coordinate system of interesting details outside, 3D projection tells us their coordinates on the surface of the window. These coordinates are what OP needs to draw 3D pictures to a 2D surface.

Here is a rough diagram of the situation: 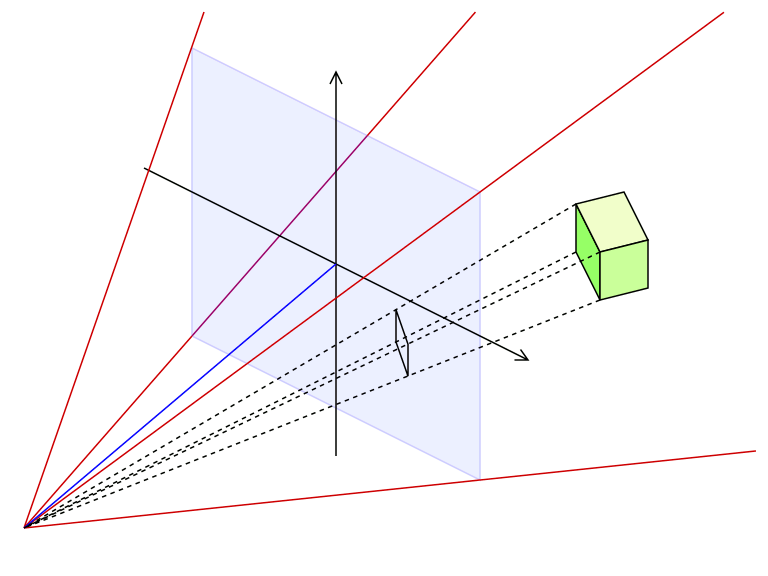 The blue pane is the window, the eye is at the lower left corner, and we are interested in the projected coordinates (projected to the window, that is) of the four corners of some cube at some distance.

In a very real sense, those coordinates are obtained by linear interpolation, except that one end of the line segment is at the eye (which we already decided is the origin, so coordinates $(0, 0, 0)$, the other end is at the 3D coordinates of the detail we wish to project, and the interpolation point is where that sight line (usually called "ray") intersects the view plane (the window, in our case).

If some detail has a $z$ coordinate smaller than $d$, it is basically between the window and the eye. These are problematic, because projecting them to the window no longer makes sense wrt. optics. In visualization software, such details are normally simply not drawn; then, you can think of the window as being the "camera surface" of some pyramid-shaped probe, the tip of the pyramid being the 3D coordinate system origin.

In games, details with $z$ coordinate smaller than $d$ often produce visual glitches, like seeing through a wall, or similar. The real numerical problems occur near the origin, near the eye. If any graphical primitive, like a line, plane, or sphere, intersects with the eye, it means the eye is badly hurt in real life; with 3D projection, we get unrealistic results (like polygons getting twisted through origin), because our model breaks down at the eye point.

I very warmly recommend you familiarize yourself with basic 2D and 3D vector algebra. Using vector addition, subtraction, scaling, dot product, and cross product, many of the operations you need to work with 3D worlds become much simpler.

Do not bother with Euler angles (or Tait-Bryan angles); they have limitations (especially gimbal lock) and ambiguities (the order of the rotations). Instead, learn about versors, or unit quaternions that represent rotations. They have four components, $$\mathbf{q} = ( w , i , j , k )$$ where $w^2 + i^2 + j^2 + k^2 = 1$. You can easily interpolate ("blend") between different versors, for example to simulate a camera panning and rotating from one orientation to the next.

Although quaternions have a reputation (among programmers) of being hard to grok, their unit quaternion or versor subset is actually very programmer-friendly. They are numerically stable (you can always divide the components by $\sqrt{w^2 + i^2 + j^2 + k^2}$ to scale it back to unit length, and it won't bias the rotation in any specific way).

For computation, you expand (convert) the versor to a 3×3 rotation matrix, which unlike those for Euler or Tait-Bryan angles, is unique for versors. There are no "gotchas" or ambiguities.

Versor-versor multiplication (Hamilton product) does the exact same for versors: multiplying $\mathbf{q}_1 \mathbf{q}_2$ yields a versor that represents a rotation by versor $\mathbf{q}_1$ followed by a rotation by versor $\mathbf{q}_2$. (Numerically, you'll want to divide each component of the result by $\sqrt{w^2 + i^2 + j^2 + k^2}$, to ensure it has unit length; as I wrote earlier, this impacts no bias to the result, and allows you to apply as many consecutive rotations as you want, without any distortion -- unlike for example for matrices, which would require orthonormalization after a dozen or so steps, even if using double-precision floating-point numbers.)

The reverse problem, trying to find the object and the point on an object, when you know the ray arriving at the eye, is called ray casting. If you then continue to trace the possible rays, to find out which ones might originate in light sources, you get to ray tracing.

Since ball-and-stick models are often a favourite starting point for physicists and chemists interested in 3D graphics, I've collected the formulas needed to do the above with cylinders (without end caps, with flat end caps, or with spherical end caps) to my Wikipedia user page.

Not the answer you're looking for? Browse other questions tagged 3d projection or ask your own question.

3
3D Perspective projection
1
$2$-dimensional to $3$-dimensional projection
1
Projecting Sphere to Rectangle/Square using Mercerator Projection
0
Projection of triangle in 3D to 2D, and reverse
0
Difference between transformation and projection
3
Retrieving the 3D Position of a Rectangle Using a Single 2D Image