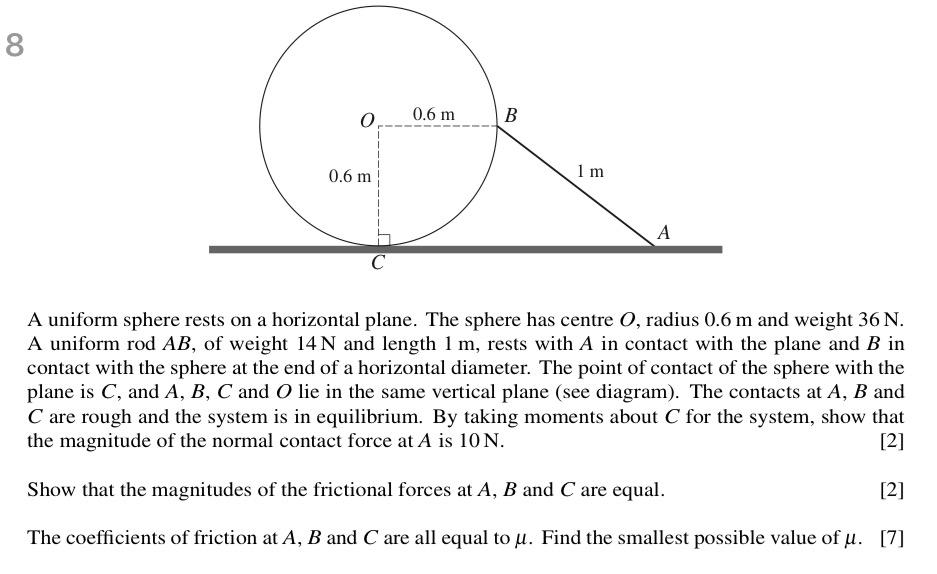 Can somebody help me in determine the direction of frictional forces at $A,B,C$?

This is my reasoning. If friction was not present due to the weight, the rod AB will fall down and hence the point A should move to the right. Hence $F_a$ is to the left. By resolution of horizontal force, $F_c$ is towards right. By taking moments at O for the sphere, $F_b$ should be downwards. These are wrong.

Frictional forces are always in the plane of contact. The frictional forces at A and C are horizontal while at B it is tangent to the sphere. Forces perpendicular to the plane of contact come from the rigidity of the elements in contact. As the ground under the sphere is considered to be rigid, whatever downward force, here from the weight of the sphere, is applied at C is resisted. That is independent of friction.

0
Frictional forces and their directions
1
Equilibrium of Forces

0
Frictional coefficient and tension force for a girder on a rough floor supported by a cable.
0
Uniform lamina (equilateral triangle) in a hoop.
0
Three equal rough cylinders on a horizontal plane.
1
Coefficient of friction of a triangular lamina $ABC$ on a rough horizontal table.
0
Frictional forces and their directions
1
Why do I obtain a zero net force in tension for a torque happening on a bar supported on its center?
1
A-Level Mechanics Ladder Friction Question. Is the question wrong?
0
How to find the acceleration of a cart sliding over a wire?