Do inequalities hold under differentiation?

The reason I am asking is because I am using this fact to prove a question with Taylor theorem.

Note you can never differentiate with an inequality. Instead, the general idea for checking inequalities with differentiation is that we take $h (x)=f (x)-g (x) $ and then try the derivative test to see whether function is increasing or decreasing. That way, if the inequality $h(a) \geq 0$ holds at a particular point a, we can prove it holds for all $x \geq a$ if $h$ is increasing and for all $x \leq a$ if $h$ is decreasing.

Your question is equivalent to is a function which attains only non-positive values necessarily non-increasing? So, the answer is no because there exist increasing functions whose graphs are under the $x$-axis: 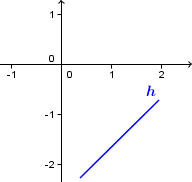 Details: As differentiation is linear, the question

is the same as

which can be rewritten as

Is a function which attains only non-positive values necessarily non-increasing?

From this point of view, the answer becomes clear: No because there are (a lot of) increasing functions whose graphs are under the $x$-axis (take any bounded increasing function and apply a translation). Probably, the simplest example is a line segment (see picture above).

Take two functions whose derivative have whatever inequality you wish (ie., $f^\prime > g^\prime$ or vice versa). Then just add or subtract a constant to one of the functions to make it larger or smaller than the other.

In short, you can very easily create pairs of functions whose values obey one inequality relation and their derivatives hold another. Or the same.

Not the answer you're looking for? Browse other questions tagged calculus derivatives inequality or ask your own question.