I want to prove that a light ray travelling downward (parallel to the $y$-axis) is reflected from the parabola in such a way that the reflected ray travels through the focus $F$.

This is the difference of the squared distances from $(x, y)$ to the $x$-axis and to $F$ so the parabola is the level set $\{g=0\}$. Therefore the gradient of $g$ is perpendicular to the tangent of the parabola. The gradient is 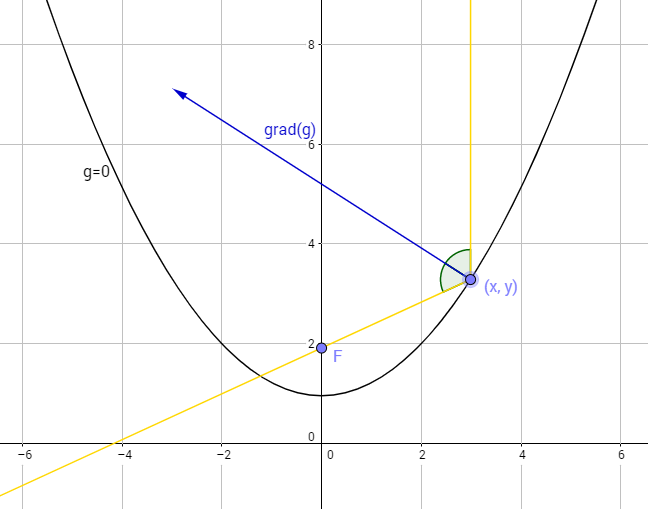 So to prove the claim, let's show that $\nabla g$ bisects the angle between $v$ and $w$ (then the ray coming in the direction $-v$ is reflected along $w$, since $\nabla g$ is normal to the parabola). To prove this it suffices to show that

So, here we came to my actual question:

Is $|v| = |w|$ clear intuitively from the fact that these are the gradients of the distance (squared) functions and the distance grows to "the maximal growth direction" always at the same pace. (We had distance squared but could have had the square root there, it wouldn't change the directions of the greatest increase.)

Maybe the geometric/analytic reasoning of $|v| = |w|$ could be made more formal by considering the $1$D-functions that measure the distance to the maximal direction and showing they grow at the same rate (at the rate $1$).

This is more of a proof verification type of post but I'd like to hear some thoughts of this sort of geometric-analytic proof and acquire deeper knowledge of the gradient :).

Rotate these four lines anticlockwise by $\theta$ where $\tan\theta =p$ is the gradient of the tangent at $P$.

The post-rotation gradients of the lines are:

The post-rotation gradient of PI and FP are equal in magnitude but opposite in sign, i.e. symmetrical about the rotated normal.

Hence, in the unrotated case, both PI and FP are also symmetrical about the normal.

Not the answer you're looking for? Browse other questions tagged multivariable-calculus proof-verification analytic-geometry conic-sections or ask your own question.