I came up with a solution to find the intersection between two rectangles:

However, I am having trouble coming up with a solution for a problem with multiple boxes in each of the red and blue rectangle sets. It should be noted that the solution needs to be differentiable. This is because I am using it to calculate the error between the red and blue rectangles and trying to optimize the parameters in a neural network that would produce a set of the rectangles. So you can think of the red rectangles as the prediction and the blue as the ground truth.

One possible approach is to decompose each set into a non-overlapping set of axis-aligned rectangles (henceforth boxes), where each edge is shared by at most two rectangles. 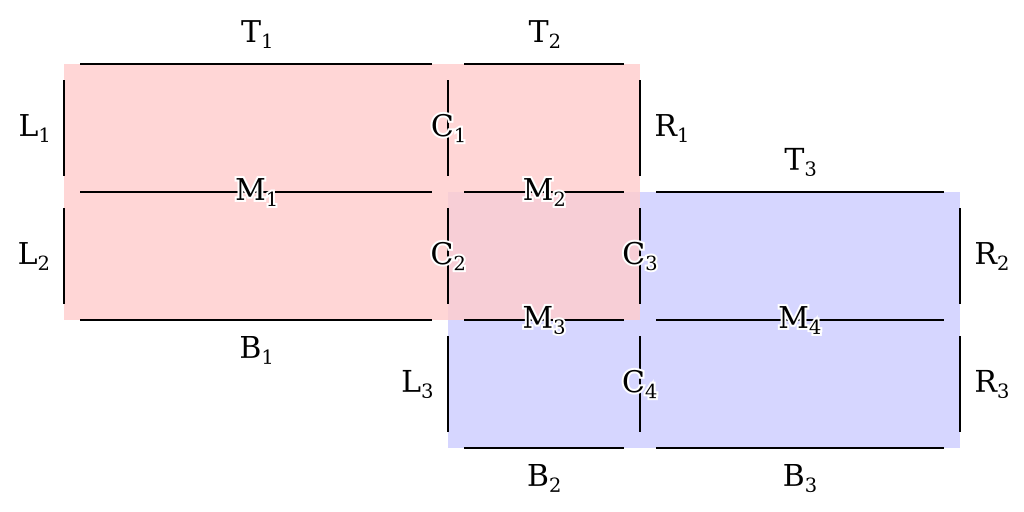 Each cell in the grid has width, height, and a color: unused, set 1, set 2, or intersection.

With the above information, it is trivial to compute the areas. Implement a procedure that sums (width×height) of each cell based on color. Then, the union is the sum of set 1, set 2, and intersect areas; and of course the area of the intersection is just the intersect sum.

More importantly, you can just as easily compute the gradient (the partial derivatives of the area function with respect to each original variable), split by color pairs:

Similarly for the vertical edges.

Some background math to explain this might be in order.

I would suggest implementing it and testing it separately first, perhaps having the test program output an SVG image of the resulting decomposed non-overlapping set, with outside horizontal edge widths and vertical edge heights and the variable names their coordinates depend on written on the outside of the image, for area and gradient verification by hard.

If this approach feels intractable, it should be noted that for $N$ rectangles ($4N$ independent variables), you could simply calculate the derivatives using $$\frac{d\,A(c_1, c_2, ..., c_{4N})}{d\,c_i} = \frac{A(..., c_i + \Delta_i, ...) - A(..., c_i - \Delta_i, ...)}{\Delta_i}$$ (involving $8N$ area calculations, so linear complexity with respect to $N$), where $\Delta_i$ is a small perturbation in the coordinate $c_i$. In a very real sense, if $\Delta_i$ approximates the typical change in one iteration step (if done along variable $c_i$), this should give more realistic feedback! You see, since the area functions are piecewise linear, and there are up to $2N-1$ pieces along each axis, the derivative, or infinitesimal or instantaneous change along that axis, may not be truly informative!

For example, consider a case where the two sets have a long thin hole somewhere. Because the hole has a long edge, the derivative with respect to the variables defining the long edges of the holes are large, and that makes those variables "more important" when looking at the derivatives only. In reality, the area of the hole may be minuscule compared to the totality, making those variables not at all important in reality. If $\Delta_i$ for the variables is large enough to span the hole, the estimate obtained with it better reflect the actual change in area if the hole were covered.

The significant number of intersected areas in the task makes it almost impossible to track the shape of the intersection figure, which may not be simply connected.

Therefore, it is necessary to differentiate the entire area into elementary rectangles (cells) whose boundaries correspond to the edges of the original rectangles. Formation of the intersection area from common cells does not seem difficult task.

Not the answer you're looking for? Browse other questions tagged calculus linear-algebra geometry optimization rectangles or ask your own question.