This is a follow-up question of a previous one of mine.

The following theorem is from the Abstract Algebra by Dummit and Foote (in the section 10.4 tensor products of modules):

Here is the reference for Theorem 8 mentioned above.

Thus if $\varphi:N\to L$ is any $R$-module homomorphism of $N$ into an $S$-module, then there is an isomorphism theorem that tells us that $N/\ker\varphi$ can be embedded into $L$. Since $\iota$ is an $R$-module homomorphism, we can embed $N/\ker\iota$ into $S\otimes_R N$, and we have already shown it is the largest such quotient.

In response to @AlJebr's question:

The following is not a counterexample since $L$ is not an $S$-module, but it might give some ideas for how to generate a counterexample (assuming one exists, and there is not something special about the structure that makes the rephrasing true). Set

(1) I take the definition of "largest quotient" to be the sentence before. I.e., if $N/\ker(\varphi)$ is another quotient of $N$ that can be embedded $N/\ker(\varphi) \hookrightarrow L$ into an $S$-module $L$, then there is a unique $R$-linear surjection $\pi: N/\ker(\iota) \to N/\ker(\varphi)$ such that the following diagram commutes. (If $A$ surjects onto $B$, I usually think of $A$ as being bigger, which is at least true in terms of cardinality.) 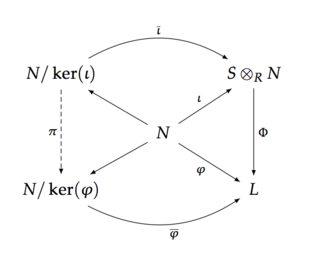 You can also think dually, in terms of ideals. $N/\ker(\iota)$ being the largest means that $\ker(\iota)$ is the smallest: if $\varphi: N \to L$ is an $S$-module homomorphism, then $\ker(\iota) \subseteq \ker(\varphi)$. This is because we "throw out" the least when quotienting by the smallest possible ideal.

Now that I think about it, I think the authors mean "largest" in terms of posets. The ideals that induce embeddings form a poset under inclusion. If we instead look at the quotients by these ideals, we get a "dual" poset where the ordering is reversed, as inclusion maps are replaced by quotient maps.

(2) now just follows from the definition of "largest."