Is there a coordinate system where a point is defined with two angles?

Edit: It has to define every point on the coordinate plane though, not just points on a sphere with a fixed radius.

Yes. There are infinitely many. An example, for 3d space: 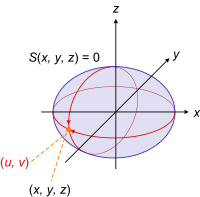 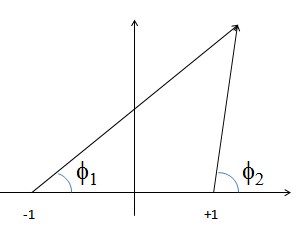 In this example, we map the points of the 2D real plane by two real angles.

This system has the disadvantage that you can't represent the points of the $x$ axis: all of them would have $0$ or $\pi$ as their coordinates.

See my crude diagram where circles are radars and diamond is missile. 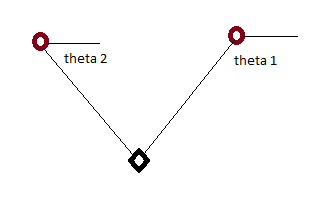 For any point on a 2-d surface, regardless of the space it is embedded in, one can assign coordinates using only two numbers. In the case of a surface like a sphere (which really is only 2 dimensional; if you have a fixed radius any point on the surface can be identified using some analog of latitude and longitude, which are themselves just a 2-d coordinate system we use on the surface of the Earth).

In a 2D coordinate system, you could use the angle from a single fixed point in the z-plane (where z != 0), and define the two angles that it forms in the x and y axis, although this seems arbitrary given that you may as well give the x and y coordinates.

This allows you to avoid the problem of not being able to define points on the tangent, as a point with a different z value has no tangents to either of the points in the z=0 plane.

You could use spherical polar coordinates as others have suggested to define points on a spherical shell, then use Stereographic projection to project the points on the lower half of that sphere onto the plane. Especially see the picture at the top of that page for some intuition (which for some reason I can't include in this answer).

This is really just Tex Andersen's answer with (arguably) some added intuition: You end up measuring angles between the origin and the point of interest from a point on the z-axis; specifically, that point is the center of the sphere.

After you do the calculations, using standard spherical polars, you get the following expression to convert back to Cartesian. Here I'm using mathematician's notation ($\varphi$ for polar angle and $\theta$ for azimuthal angle), and I'm measuring polar angle from the bottom of the sphere rather than the top to simplify the equations (otherwise you'd need to replace $\varphi$ with $\pi-\varphi$).

Not the answer you're looking for? Browse other questions tagged coordinate-systems or ask your own question.