Getting the third point from two points on one line

My question is the following 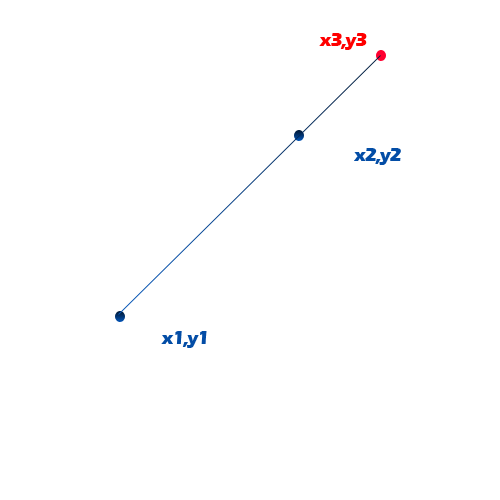 and the distance "d", in the case with the value of 300 units

you can define a vector (namely "u") pointing from P1 to P2, using vector subtraction:

then, you can normalize "u" making it unit norm, we can name that vector "v"

to obtain the third point (namely P3), you need just to sum a vector with the direction from P1 to P2 with the norm equal to the distance (in case 300 units), in our notation:

Thanks to the illustration, we now that the direction is from P1 to P2. But remember, that only given the distance, are two solutions: the above and with -v (300 units from P1 in the direction from P2 to P1).

That solution is valid for a euclidean space with any number of dimensions (changes only the number of components to normalize and the number of elements to calculate the norm).

Not the answer you're looking for? Browse other questions tagged geometry euclidean-geometry analytic-geometry or ask your own question.

-1
Move a point on a line created with two points

2
Calculate a point on the line at a specific distance .
1
Finding a point between two points given the points and a distance
0
A point $P$ inside the tetrahedron is at the same distance $r$ from the four plane faces of the tetrahedron.Find the value of $r.$
0
How to find coordinates of points lying at given distance from point on line?
0
How do I find a pair of points with the given property?
0
Calculating a point between two points on a slant line with a distance $d$
0
How to find the third point at a given distance angle from a line segment in a plane?
5
Proving the existence of the Euler line using methods from Coordinate Geometry.
0
How to find the closest distance between a point and a segment defined by two points by coordinates?