I am having trouble with the question below:

Given a not necessarily convex 10 sided polygon, draw circles with its sides as diameters. Is it possible that all these circles pass through a point which is not a vertex of this 10 sided polygon?

Do the same for an 11 sided polygon.

The question asks for a decagon such that the circles drawn around each edge (using that edge as its diameter) all intersect in one point. If that point is called $P$, then we know that $\angle A_iPA_{i+1}$ is $90$ degrees for any pair of successive vertices $A_i$ and $A_{i+1}$.

Here is one example: 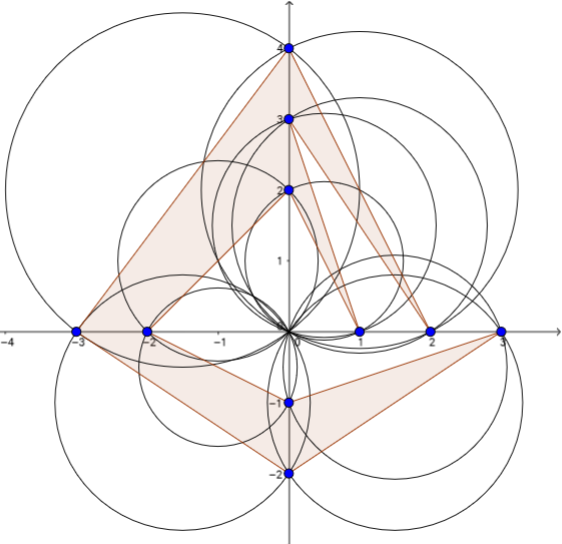 The question then asks about an 11-gon. It would seem impossible to make the construction work for any polygon with an odd number of vertices, because the vertices must alternately lie on the x and the y axis. The last vertex, $A_{11}$, therefore lies on the x-axis just like $A_1$, and so does the edge connecting them. The only way for the circle around that edge to go through the origin is if $A_{11}$ actually lies at the origin.

And this actually works. By putting $A_{11}$ at the origin, it lies on both axes, and because of this ambiguity it can be considered to be on a different axis to either of its neighbours, even though one neighbour is on the x axis and the other on the y axis. It is impossible however if we require the intersection point of the circles to be distinct from the vertices of the polygon.

26
Proof that every polygon with an inscribed circle is convex?
13
Every polygon has an interior diagonal
3
Is a quadrilateral with one pair of opposite angles congruent and the other pair noncongruent necessarily a kite?
1
Proof that for any n-sided polygon P, and any integer m greater than n, there is an m-sided polygon with the same area and perimeter as P?
2
even-sided cyclic polygons
2
Constructing a square whose sides contain 4 given points
2
Finding third side of a minimal triangle
2
Can I uniquely identify a cell in an arbitrary “grid” by two numbers?
3
A Jordan Curve Symmetric About the Origin Does Not Pass Through Origin