I am having some trouble understanding Takens' embedding theorem, and was hoping that someone with greater knowledge could help out.

Formally, the theorem goes as follows:

In English it says (not necessarily using the same notation as theorem):

Suppose that a measured time series $y(1),y(2),...,y(N)$ lies on a $D$-dimensional attractor of an $n$ th-order deterministic dynamical system. The starting point obtains an embedding from the recorded data. A convenient, though not unique, representation is achieved by using delay coordinates, for which a delay vector has the following form:

where $d_\text{e}$ is the embedding dimension and $τ$ is the delay time. Takens has shown that embeddings with $d > 2n$ will be faithful generically so that there is a smooth map $f:\mathbb{R}^{d_\text{e}} \mapsto \mathbb{R}$ such that

for all integers $k$, and where the forecasting time $T$ and $\tau$ are also assumed to be integers. 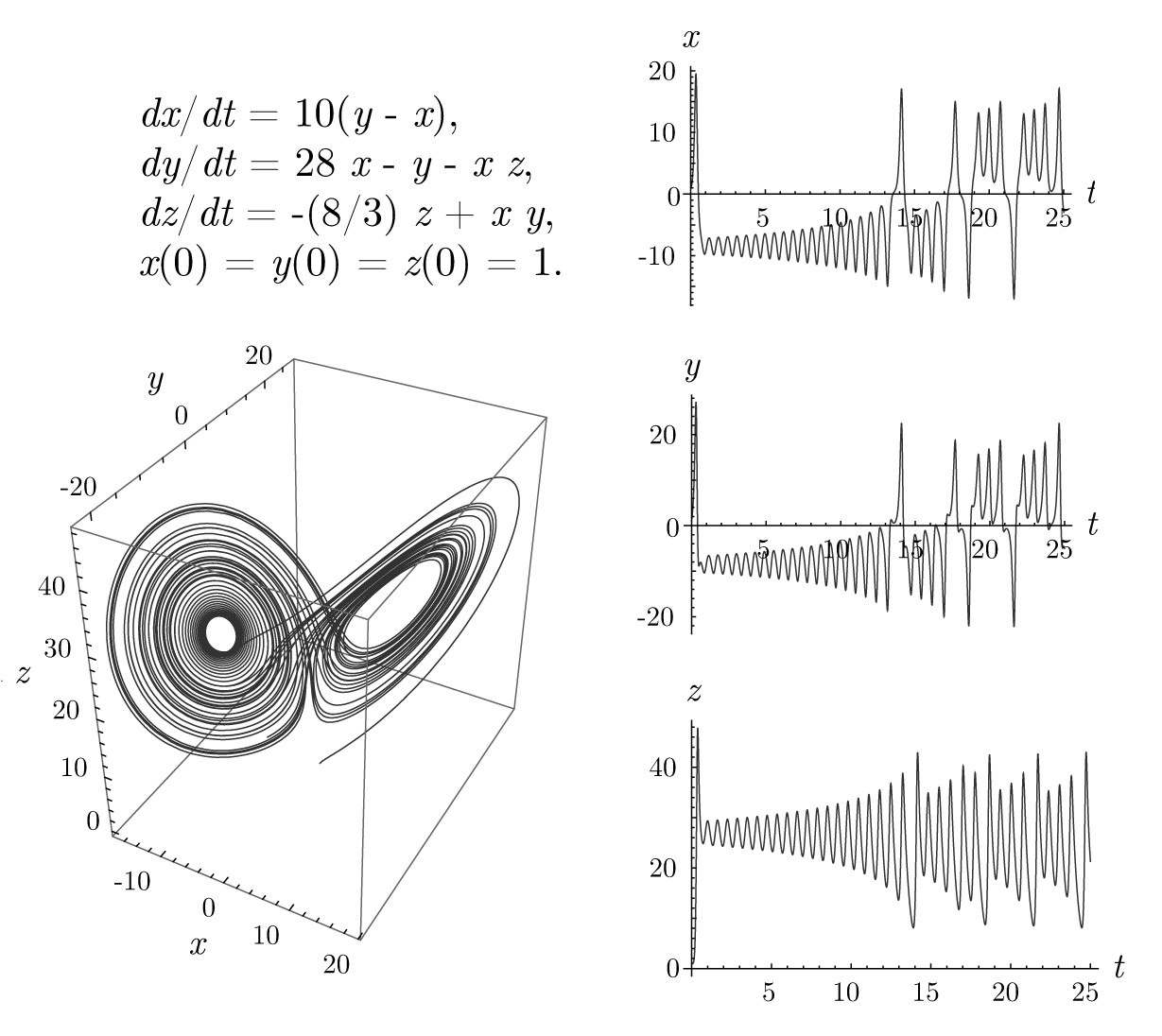 Practical meaning of the Takens Theorem using your example

The butterlfly-like structure traced out by the trajectories of the Lorenz system is the attractor of this dynamics. Its properties contain useful information about the dynamics, e.g., that it’s chaotic and how the “wings” interact. In a typical situation you do not have access to all dynamical variables ($x$, $y$, and $z$), but only to one time series, say $z$.

Takens theorem now states that you can obtain a structure that is topologically equivalent to your attractor by means of a delay embedding. It further gives an upper bound for the required dimension of this embedding. However, this is not so useful in reality, as you do not know the quantities going into this. However, this estimate is usually too high: For example, Lorenz attractor can be embedded with a three-dimensional delay embedding, while the Takens Theorem only guarantees that a seven-dimensional embedding suffices.

I presume that at least some of your confusion stems from the following sentence from your second quote:

Were this written in analogy to your first quote, the relation would have to be $d>2D$. (Note that this is not incorrect though, since $D>n$.)

The equivalences between your first and second quote are as follows:

An $n^{th}$ order deterministic dynamical system, means that it has $n$ degrees of freedom? I don't understand what $n$ (or $m$ in the theorem actually is)?

You are correct regarding $n$. However, $n$ is not equal to the $m$ from the theorem. The closest equivalent to $n$ in your first quote is the dimension of some $ℝ^n$ into which $M$ is embedded.

The time-series lives on some $D$-dimensional attractor, so that would be equivalent to saying we are measuring some system and we record data of dimension $D$?

No. The dimension of the attractor is a property of the dynamics. It is independent of your number of actually measured observables.

For example, a limit-cycle dynamics has a one-dimensional attractor, as you can identify positions on the attractor with one real number¹, namely the phase. A quasiperiodic dynamics that is a superposition of two periodic dynamics with incommensurable frequencies has a dimension of two, as you need two phases to identify a position on the attractor. In general, the attractor is some subset of a $D$-manifold ($M$ in the first quote), which in turn is embedded in the $n$-dimensional state space of the dynamics (hence $D<n$). For example, for your Lorenz system, the butterfly-shaped structure traced out by the trajectories is the attractor.

I.e. imagine we are measuring some system of stock prices consisting of three different stocks, and we sample this price at every $\Delta t$, then $D=3$?

No, at best we have $n=3$ and that’s if those three stock prices interact with nothing else. If you have other external factors to consider, this adds degrees of freedom and thus increases $n$.

Also note that in this statement you can replace $n$ by $D$ (see above) or even the box-counting dimension $D_B$ of the attractor (Theorem of Sauer, Yorke, and Casdagli).

¹ assuming that the number is mapped to the position in a reasonable (i.e., piecewise smooth) fashion

Not the answer you're looking for? Browse other questions tagged differential-geometry differential-topology smooth-manifolds chaos-theory compact-manifolds or ask your own question.

3
Why Lorenz attractor can be embedded by a 3-step time delay map?

3
Question about differential of embedding
5
What is the difference between high dimensional and low dimensional chaos?
1
Embedding dimension $m>4$ for high-dimensional chaos.
2
Does an immersion factor through an embedding?
1
Approximating the tangent vector in a phase space (or state space) reconstruction
0
Understanding Embedded submanifolds and immersions
3
Why Lorenz attractor can be embedded by a 3-step time delay map?
1
A “counterexample” on Takens' embedding theorem for phase space contruction